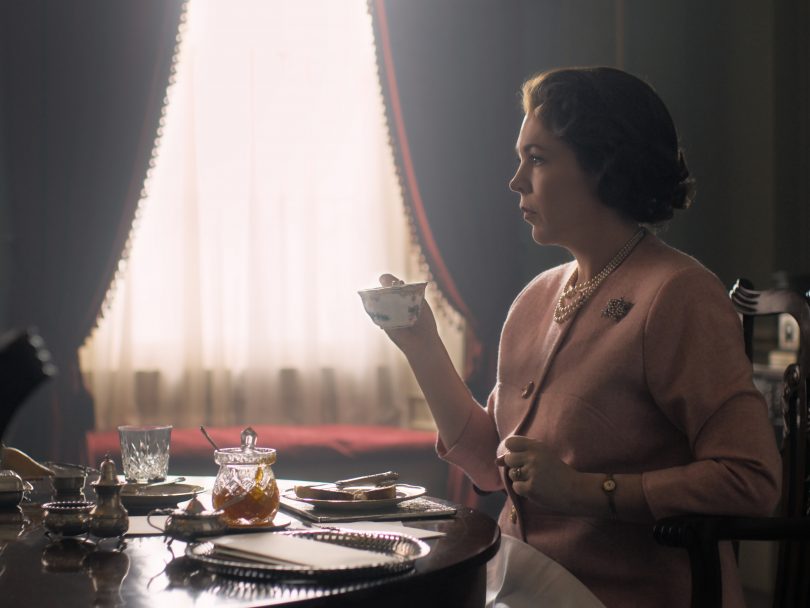 When The Crown returns on November 17th, fans can expect the same historical intrigue, the same gorgeous Buckingham Palace backdrop and the same bloody brilliant writing. But Season 3 will also feature some pretty significant changes—namely an entirely new cast with English actress Olivia Colman stepping in for Claire Foy as the titular tea-sipper. In a new Vogue cover profile, the 45-year-old recent Oscar-winner offers up a hint of her delightfully un-Hollywood personality along with her meringue recipe and her thoughts on a certain Royal Highness. Here’s everything we learned…

She’s a new kind of coverwoman

If the headline—How Olivia Colman Is Reinventing Superstardom—doesn’t make it clear, writer Nathan Heller points out that in the past, Vogue cover stars tend to fall into one of two categories: the wide-eyed ingénue or the indisputable icon: “At 45, Colman is a cover woman for a new era: proof of the glamour of slowly and devotedly building one’s life and craft; a reminder that, for a rising generation of powerful women, it is possible to reach success and mastery while remaining honest, patient, healthy, whole.” Speaking of her late-in-life stardom, Colman says she wouldn’t have wanted it any other way: “To be the ingenue and to keep working is rare because once people see you as that, they don’t like the process of aging… Which is f–king ridiculous!” She tells Heller, “I grew to my place.”

The profile begins with a description of Season 3’s opening moments wherein Her Majesty is “contemplating her own aging image on a postage stamp.” (Netflix released a trailer with the same scene over the weekend). According to Heller (who has seen the first two episodes), the third season explores the pressure of living in the public eye. Of her own pressure to live up to her predecessor’s highly praised performance Colman says, “I sort of tried to imagine how Claire would do it. But I’m not actually the queen and I’m not actually Claire Foy.”

#OliviaColman is our October issue cover star! Tap the link in our bio for the full profile. Photographed by #AnnieLeibovitz, styled by @tonnegood, written by Nathan Heller, Vogue, October 2019.

Another way in which Colman differs from both Foy and Her Majesty: eye colour. Initially blue contacts were attempted to ensure accuracy and continuity, but “finally, production resigned itself to a brown eyed queen,” Heller explains. In a recent interview with The Guardian, one of the series’ directors Ben Carson said that the lenses made it seem like “we had taken all of her acting ability and put it in a safe and locked it away.”

She’s a fan of The Queen (if not the monarchy)

In the past Colman has said that she’s not a big fan of the monarchy, but she does have a soft spot for this particular monarch: “It’s easy to just go, ‘Well, how hard can being the queen be?’ I think it’s really hard. You can’t just go, ‘I don’t want to do it today.’ ”

That time she got goofy in front of His Highness

Coleman describes an audience she had with the future monarchs Prince William and Duchess Kate at last year’s BAFTAS (where she won Best Lead Actress for The Favourite): “I got over-grinny and a bit nervous and was sort of introducing Prince William to everybody.”

From what’s changed for her since winning an Oscar to the most British phrase ever, October cover star #OliviaColman answers #73Questions. Tap the link in our bio for the full video. Director and Interviewer @hellojoesabia Producer @marina_c DP @jessdunlap Edit and Color @realtalkrealtalk Post Sound @bangworldwide Stylist @mary_fellowes Filmed at @theritzlondon

“She’s a great big delicious cocktail of a person,” says Colman’s co-star Rachel Weisz, who starred alongside Colman in her Oscar winning turn in 2018’s The Favourite. Emma Stone (who was also in the movie) says Colman is “kind of a perfect woman,” and “so deeply good.” David Tennant (who starred with Colman in the amazing Broadchurch) says, “[t]here’s no bulls–t with her. That’s true of her performances, and it’s true of her as a person.” Pheobe Waller-Bridge, the creator of Fleabag says on that set Colman is known as “a f–king Ferrari.”

This queen knows how to clean

Before enrolling in the Bristol Old Vic Theatre School, Colman had planned to start training as a teacher. Even before that she made ends meet by cleaning houses, a job she took a lot of pride in. “It was such a position of trust,” she says.

Her friends call her Collie

As if she could be any more endearing…

She’s a big deal in Britain

While TV fans on this side of the pond may not be terribly familiar with Colman, she’s already a pretty big deal in her home continent having starred in mega hits like Broadchurch and The Night Manager (in which she played a pregnant spy while actually pregnant). Her role as a different queen in The Favourite earned her a bunch of awards including last year’s Best Actress Oscar. (She was also nominated for her performance in Fleabag at last weekend’s Emmy’s).

When Heller visits Colman at her home in South London it’s a pretty normal scene, with her husband taking the kids to do the shopping and the grass scattered with toys. Colman says having a schedule packed with her kids and career and making dessert for the neighbourhood barbecue is the kind of chaos she loves: “Although I get fed up with the mess and things, it’s exactly what I always wanted.” As for that dessert, she opts to attempt her first ever meringue with Heller sitting in as reluctant sous chef. “It’s a bit like snot,” Colman says of her egg white mixture.

Her bum, her rules

So far success hasn’t gone to Colman’s head…or any other part of her body. Speaking on the pressure to conform to unrealistic beauty standards, she doesn’t mince words, saying, “If someone doesn’t like me because of the size of my bum, they can f–k off. Because I’m quite a nice person to be with, actually.”