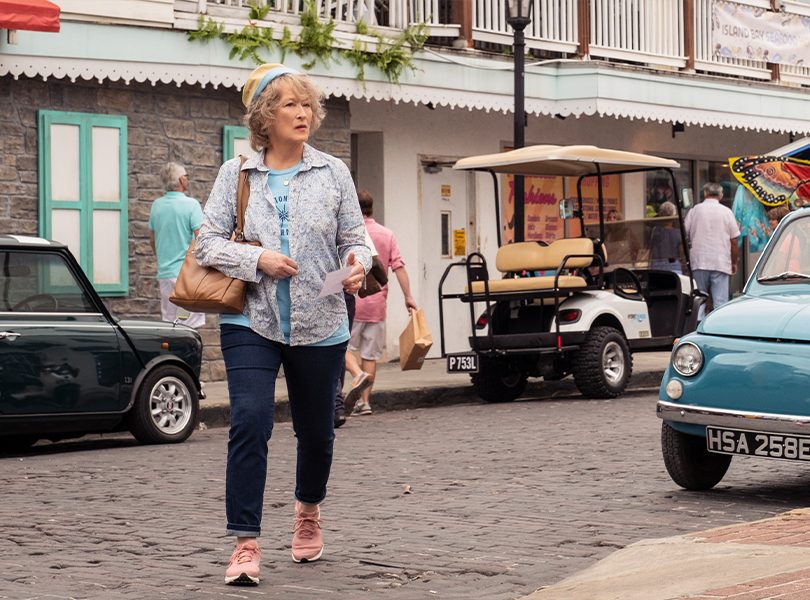 Netflix Canada has released its October offerings, which are a nice mix of cozy viewing, reliable laughs and spine-tingling scares. (I should also mention that the original Scream trilogy is leaving the site after October 20, so it’s your last chance to enjoy two classic scary films and one horrible one featuring Courtney Cox with terrifying bangs. DON’T MISS THEM. Plus, The Cabin in the Woods leaves the same day and Wonder Woman leaves on the 29th!)

So grab a blanket (or two or three) and check out what your favourite streamer has to offer this coming month.

A harrowing doc series following eight undocumented families living in the United States and struggling with an immigration system that is seemingly stacked against them. Produced by Selena Gomez, this timely series aims to “illuminate and humanize” the contemporary immigrant experience at a time when the subject has created deep political divisions in the west. Definitely worth a look, but make sure you have tissues on hand.

Based on the novella by Stephen King and son Joe Hill, In the Tall Grass is about two siblings who follow the cries of their lost brother into a field of tall grass where…well, nothing is as it seems and everything is terrifying. Directed by Cube’s Vincenzo Natali, a filmmaker well versed in wringing the most out of limited spaces, this fright flick is getting tons of advance buzz, and features horror vet (and dreamboat supreme) Patrick Wilson.

El Dragon: Return of a Warrior

The Little Canadian Show That Could continues to chug along with some of the sharpest comedy writing on television, a performance from Catherine O’Hara that is one for the ages, positive gay representation and a freight car full of Emmy nominations. And with the recently announced sixth and final season premiering next year, now’s your chance to binge the series from the beginning and brag to everyone that you’ve been watching since 2015. Sure you have, Brenda.

Some of you may have heard about a show called Breaking Bad. Y’know, just a tiny show that only a handful of people watched and that wasn’t a brilliantly crafted pop culture juggernaut or anything. Well, Vince Gilligan has decided to make a sequel film to said series, following Jesse Pinkman after the events of the series finale, and Netflix will be releasing it digitally and theatrically on the same day.  I suspect some folks will talk about it. But only a few.

The Forest of Love

The Awakenings of Motti Wolenbruch

YooHoo to the Rescue: Season 2

When I first got the list of October titles, and saw this wedged between the fourth season of Riverdale and the second season of Insatiable, I thought I was having a mini film-student stroke. Citizen Kane? Like *the* Citizen Kane? Marketed as a hot new release on Netflix? OK. But, yes, I’m going to select it as a hot pick (even if my editor gives me guff for it) (*Editor’s note: No guff!*) because it’s one of the greatest films of all time. No hyperbole. It literally changed cinema forever, and laid the groundwork for everything that followed. Including Insatiable, I guess. So, watch it!

We live in the best time, if only because we can see a brand new Steven Soderbergh film starring Meryl Streep, Gary Oldman and Antonio Banderas without even leaving the house. Based on Jake Bernstein’s book on the Panama Papers, the film explores how one woman (Streep) inadvertently exposed a huge international network of legal swindling. (She would.)

A man (Paul Rudd) undergoes a “mysterious treatment” that promises him a better life, only to later discover he’s been replaced by a doppelgänger. This dark comedy series has Rudd playing both roles, and often against himself, and…well, let’s be honest: Netflix is just giving the people what they want, and what they want is more Rudds.

The House of Flowers: Season 2

Tell Me Who I Am

Echo in the Canyon

It’s comedy wunderkind Jenny Slate (of Big Mouth, Parks & Rec and SNL), tackling a different type of fright than your traditional ghosts and goblins. This comedy special, which will be a mix of stand-up interspersed with childhood clips and interviews with family, showcases Slate confronting her various fears and, as with all her work, expect it to be very, very funny.

Dancing with the Birds

Dolemite is My Name

Remember adorable little Dustin from Stranger Things? Riding his bike and talking on walkie-talkies and singing “The NeverEnding Story” to his equally adorable girlfriend? Well, that shaggy-haired moppet is now an executive producer of a spooky prank show! (What have you done this year, huh?) Although the premise drew some backlash online (for being built around the concept that participants were expecting employment), we’ve been assured the final product is all in good fun, and that the participants were paid for their time. Just probably not as much as Dusty Bun.

It Takes a Lunatic

Shine on with Reese: Season 1