There's A New Movie About Meghan And Harry, And The Royals Aren't Going To Like It

A few members of the monarchy don't come off very well. 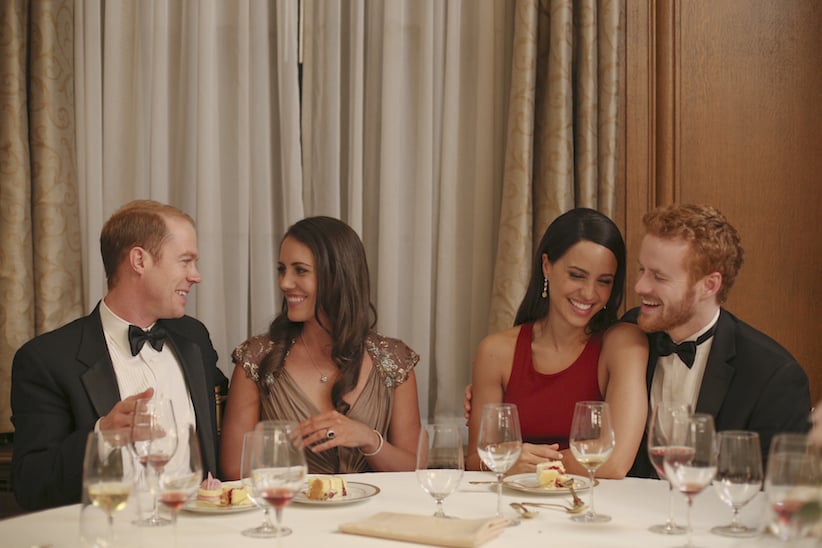 Last night was the world premiere of Harry & Meghan: A Royal Romance, the Lifetime movie that presents a dramatized version of the greatest love story every told. While based on the facts as we know them, the script takes a lot of poetic license in imagining the conversations, confrontations and consummations(!!!) that took place behind the scenes, and to say some characters come off a lot better than others is putting it mildly.

Real life Lizzie is known for her titanium-strong upper lip, but in the Lifetime version, good old “gran” is an ebullient and (dare we say) cuddly — more Dear Aunt Agnes than the repressed and duty-bound monarch we have come to know in The Crown. In the dramatized version of Meghan’s first meeting with Her Majesty, the two examine a portrait of Queen Charlotte, the wife of King George III, who was also biracial. The Queen is portrayed as explicitly progressive and the whole Wales clan as mixed race. (Note: In reality, Princess Charlotte’s racial lineage is suspected, but unconfirmed, but why let that get in the way of a classic Lifetime moment?)

Do the Queen’s beloved pets really jump up on the furniture, as one particularly cheeky pup did during that same first meeting scene?

Early on, Charles accuses his son of dating Meghan because he likes to “piss of The Firm” (a.k.a. the royal family), and the two come to blows when Harry insists on releasing the now-famous statement about the paparazzi endangering his girlfriend. Dear old dad makes up for it later, though, in an epic scene at Pippa Middleton’s wedding. To set the stage: Harry has a confrontation with two elder royal women (Lady Victoria and Lady Sarah), one of whom is wearing a Blackamoor brooch. He tells them that the accessory is extremely offensive and they respond that what is offensive is Harry’s relationship with Meghan (who they actually describe as a “tar brush”). Enter Prince Charles, who kicks the horrible old bigots out of the bash and then tells Harry to go and get Meghan (no ring, no bring policy be damned!): “If anyone has a problem with that,” he says, “they can talk to the first in line.”

In the movie, the racist brooch wearer is a fictional Lady Victoria, but of we can assume the character is a stand in for Princess Michael of Kent (a distant cousin who really did wear a Blackamoor brooch to Christmas at the Queen’s place), and for an entire generation of backward-thinking royals who have been scandalized by Harry and Meghan’s modern romance. It’s not just the old folks, either. The movie’s other main mean girl is a character called Bella (a composite of Kate’s ladies-in-waiting crew), who accuses Meghan of dating Harry to increase her celebrity profile, makes a bunch of backhanded racist comments and has the nerve to refer to Suits as “not exactly Shakespeare.” 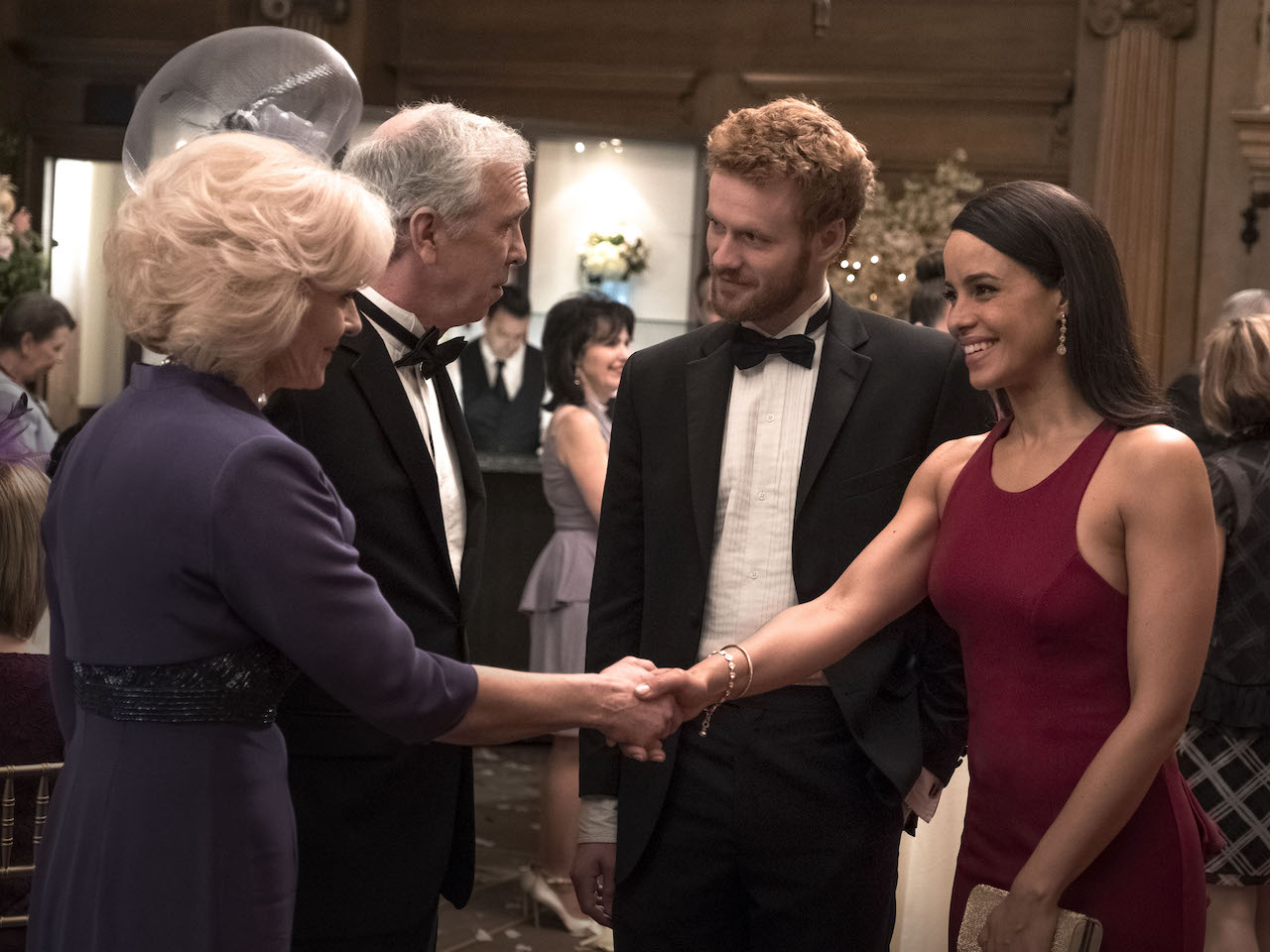 The movie first introduces us to Meghan as a young girl who is upset by a sexist Ivory soap campaign, complaining to her dad about gender inequality — just the first of many nods to MM’s feminist leanings. Meanwhile, Harry is a misunderstood softy who is more concerned with living a life of purpose than being a prince. From their first date (Meghan teases Harry for being 40 minutes late), to their sexy Botswana getaway (including a memorable disrobing scene), these two are portrayed as totally genuine and totally in love. Sure things get a little corny, but this is a Lifetime movie — what do you expect?

While they’re keen for Harry to settle down (“Peter Pan can’t stay in Neverland forever,” Kate tells him at the beginning of the movie), the royal brother and sister-in-law are initially skeptical of his choice. Wills is only slightly less sarcastic than one of those old men from The Muppet Show. (“Bloody hell — you’ll be doing yoga next,” he says when Harry defends Meghan’s lifestyle blog, The Tig.) While Kate is cold and calculated in her assessment of Meghan as an unsuitable mate (“she’s an actress, she’s American, her mother’s black”). It’s almost like the scriptwriters decided that Wills and Kate needed to be character foils for the main event: Harry is wide-eyed and kind; William is jaded and curt. Meghan is optimistic and empowered; Kate is a frosty realist who says to Harry of Meghan, “If she’s your girl, she can’t have opinions.” No question the depiction of the Duchess is the least sympathetic in the entire movie, though she does have many of the most memorable lines, describing the aforementioned Bella as “a bit of a back-and-front.” And then encouraging baby deer Meghan to “look it up.”

Markle’s adopted home city gets a bunch of love in the movie — from the flattering skyline shots to the (presumably manufactured) plot twist wherein Harry is actually willing to move here, before Meghan decides to give up her Suits gig to “do the whole royal picture” in England.

In the movie version, Harry and Meghan’s romance becomes public after they go to a Halloween party at Soho House in Toronto. The prince goes disguised in a frog costume (womp, womp), but his identity is revealed when he takes off his mask to have a drink. At which point, some random anti-royalist guy picks a fight with him saying, “Your grandmother can kiss my ass.” Harry’s response: “I thought Canadians were supposed to be super friendly.”

If there is a previously unacknowledged hero in this story it is Meghan’s devoted mom, who (at least in the movie version), prevents what could have been a permanent breakup. She even drives her daughter to the airport, facilitating a “Stop the plane!” moment that’s right up there with The Bodyguard.

Good at being bad: Princess Diana

In a flashback, Harry’s mom tells him, “It’s OK to be naughty … as long as you don’t get caught.” Which is sort of how you might feel about watching a Lifetime movie…