Unsurprisingly, John Mayer does not come off well. 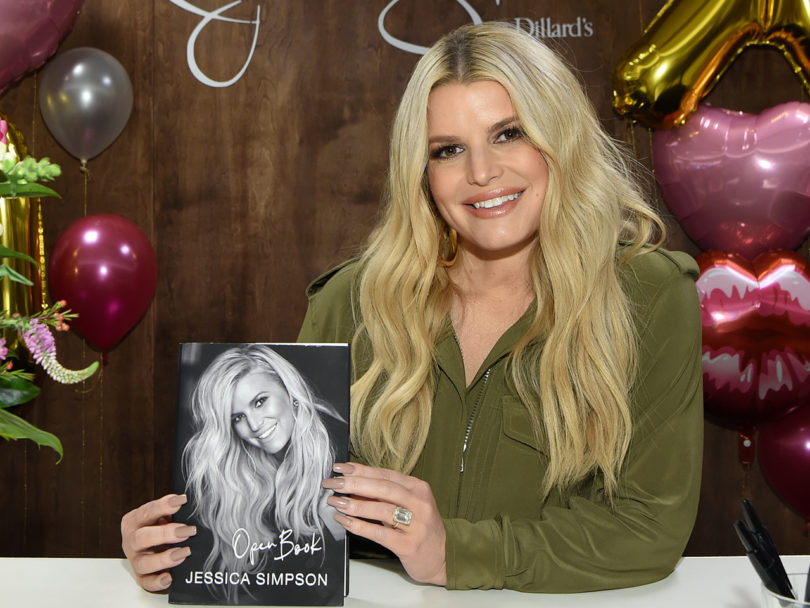 Jessica Simpson called her new memoir Open Book, which is a pretty apt description of a frank and funny retrospective of her life both before and after she became one of the tabloid’s favourite targets. From her days as a Kardashian precursor on reality TV to her tortured relationships to her struggles with alcohol and self-medication, Simpson doesn’t skimp on details; sharing even the most difficult moments from her past—like the sexual abuse she endured as a child. And of course, there is also lots of grade-A gossip.

Here, the biggest revelations and juiciest nuggets from Open Book, including what prompted Simpson to stop drinking and why John Mayer is totally a douche.

She had the hots for Ryan Gosling

As a tween, Simpson attended the casting camp for a mid ’90s Mickey Mouse Club reboot, and made it all the way to the finals—along with fellow future pop stars Britney Spears, Christina Aguilera and Justin Timberlake. But it was the already brooding young Canadian in the group who caught her attention. “I liked Ryan Gosling very much. I decided he was definitely the cutest there,” she writes.

Simpson was the only one in the audition group that didn’t go on to be a Mouseketeer, but she did share “a nostalgic kiss” with Timberlake more than a decade later—after her divorce from Nick Lachey and before his relationship with Jessica Biel. Right after they smooched, JT pulled out his phone; when Jessica asked what he was doing, he explained that he was “texting Gosling.” The two had made a bet about who would kiss her first.

Her acting coach was an action star

In preparation for her Mickey Mouse Club audition, the powers that be at Disney enrolled Simpson in acting lessons from Chuck Norris. Yes, that Chuck Norris. The 1980s action star told Simpson that she had “too much expression” and that she needed to be more like Denzel Washington. Not the best advice for a budding comedic actor, but anyway…

She faced constant pressure about her weight

Simpson started feeling insecure about her body when she was 17, shortly after she signed with Columbia Records. Label exec Tommy Mottola—Mariah Carey’s soon-to-be ex-husband—told her she needed to lose 15 pounds. She did, but it wasn’t enough, with Mottola insisting that she needed  “Janet Jackson abs.” Despite obsessively dieting and exercising, she failed to develop a visible six pack, so Simpson used an eyeliner to pencil in some definition.

She turned down The Notebook

Simpson says she declined the role of Allie Hamilton in the 2004 blockbuster because “they wouldn’t budge on taking out the sex scene,” which she wanted to avoid based on her religious values. No word on if she knew who was co-starring, but it’s hard to imagine anyone sharing the same crackling chemistry as Rachel McAdams and Ryan Gosling (McGosling 4ever).

The Newlyweds was as fake as we thought it was

The Newlyweds, which debuted in 2003, was one of the first celebrity reality series (and also introduced the world to punchlines like “chicken of the sea”). But behind the laughs there was a whole lot of tension as Simpson—who was 20 when she married Lachey—grew into her adult self and Lachey longed for the dependent, wide-eyed woman he married. They tried counselling, but Simpson says Lachey refused to go after just a few sessions. By the time they were shooting the third season, the couple wasn’t even speaking to each other. After four years of marriage, Simpson asked for a divorce—but despite mutual animosity, Lachey begged her to reconsider. She held strong… but not entirely, sleeping with Lachey one last time when he came over to play her his new album, What’s Left of Me. “I know, I wish you were there to stop me too,” Simpson writes to her reader.

Post-divorce, she became part of a cool single ladies club

After her divorce from Lachey in 2006, Simpson moved into the first house she ever considered to be her own—a “starter mansion” (per her real estate agent) in a gated community in Beverly Hills where she was surrounded by “high profile single women who were also in transition and finding themselves.” Her neighbours included Nicole Kidman, Penelope Cruz and Cameron Diaz. “It made the gate a paparazzi resting place,” she writes, “but inside we ladies of the Canyon were free.”

The mom jeans scandal had a silver lining

In 2009, photos of Simpson performing at a chili cook-off in so-called “mom jeans” led to an international incident where the tabloids and even mainstream media began documenting her supposed weight gain with split screens of present-day Simpson beside photos of her from her 2005 film, Dukes of Hazzard. “It had to be a chili cook-off,” Simpson writes of the drama, which she calls “heartbreaking” but ultimately motivating. Feeling the sting of fat shaming, she pledged that her fashion line would become a leader in inclusivity and body positivity.

Yes, John Mayer appears to be a douchebag…

Simpson describes her dynamic with her on-again/off again beau as one where she would constantly strive to earn Mayer’s approval, and says he would give it… then take it away… then give it… then take it away. This cycle went on for four years with Simpson finally ending things (for good) when Mayer gave the infamous 2010 Playboy interview in which he referred to her as “sexual napalm.” In the book, she also shares a more recent conversation she had with her therapist who told her that Mayer “never loved you, he was obsessed with you. There’s a difference.”

In between breakups with Mayer, Simpson was living with football player Tony Romo in Dallas until Mayer—who had last broke it off with Simpson— started hanging out with her family and professing his love for her. Of course, when Simpson finally did decide to give Mayer another chance, he shifted gears. Simpson says that around this time Mayer did an interview with Rolling Stone referencing the “girls” (plural!) he was sleeping with, and Simpson had a pretty good sense that the other woman was his recent ex. (Who you may have heard of).

One of Simpson’s most memorable public meltdowns came in 2006 when she was invited to perform at the Kennedy Center Honors’ tribute to Dolly Parton. Mayer had broken up with her (unexpectedly… again) on the morning of the event and Simpson says she spent the afternoon drowning her sorrows in Pinot Grigio. During her performance of “9 to 5,” she continuously flubbed the lyrics and couldn’t get the beat, finally darting offstage partway through the song. Later that evening she biffed a re-do attempt (and was cut from the TV broadcast). Humiliated and still sloppy, Simpson was shocked when Parton came to see her in her dressing room, joking that even she had trouble with the “9 to 5” lyrics. She gave Simpson her number, saying that if she ever needed anything, she should call. The two recorded Dolly’s song “Do You Know?” together two years later.

Simpson points to a 2017 appearance on The Ellen DeGeneres Show as one of a few wake-up calls that eventually forced her to confront her drinking. “I admit I drank beforehand,” she writes of the extremely awkward interview, during which she couldn’t remember how long she had been married to her current husband, Eric Johnson, and talks about mermaids peeing on her children (while Ellen appears to be giving SOS signs to the camera). “I’m truly sorry I disrespected them,” she says now of DeGeneres and her audience.

For Halloween 2017, Simpson had planned a huge party. She wound up spending the evening alone, dressed in a Willy Nelson costume, having an alcohol-induced anxiety attack in her bedroom. At this point, her drinking had become a serious problem. Her beverage of choice was vodka mixed with flavoured Perrier, which she would drink out of one of her “glitter cups.” Behind the scenes, her close friends had started planning an intervention. The day after Halloween, they gathered at her place and gave her some tough love. Simpson agreed to quit and then poured one more vodka drink. She hasn’t had a sip since.

Her husband got sober when she did

Knock on wood, but Simpson seems to have found a good guy in her second husband, a former NFL player with whom she has three kids. Johnson isn’t one of those macho football types; instead, he’s vegan and does yoga. Like Simpson, Johnson was also a heavy partier, but when she told him she was going to stop drinking he didn’t hesitate, saying, “Okay, I will too.”