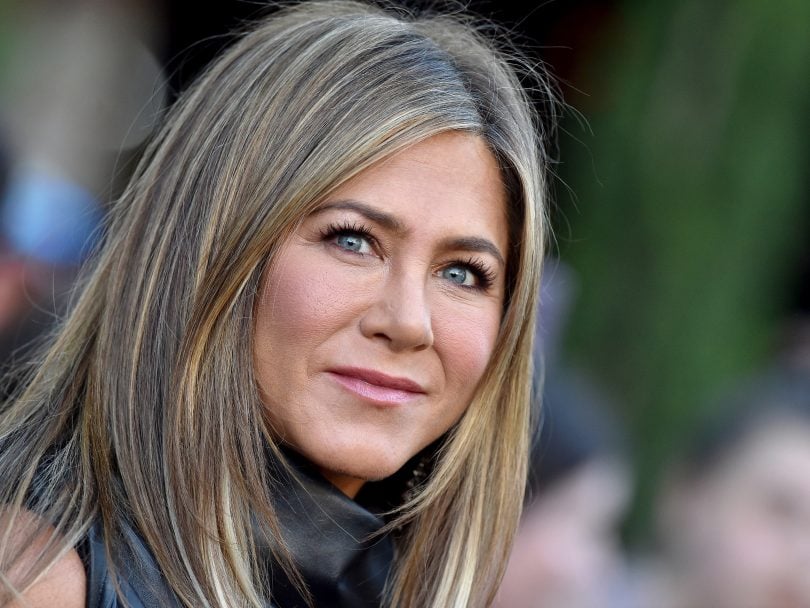 Jennifer Aniston is back on the media circuit giving interviews to promote her upcoming TV series The Morning Show, the biggest bauble in Apple’s new TV streaming service, Apple TV (which launches November 1st). The ten-episode dramedy is set in the surprisingly cutthroat world of morning news, and is maybe the first TV series with an explicitly post-#MeToo premise. In a new New York Times profile, Aniston talks about her small screen comeback, her favourite wellness ritual and displays a fondness for a certain Canadian fashion statement. Here’s everything we learned…

The profile opens with a description of seven women boarding a plane for Mexico (Jen’s favourite vacation destination, for anyone who hasn’t been reading Us Weekly for the past fifteen years). This particular trip was to celebrate her big 5-0 and her gang was mostly women she has known since before she became Rachel. Everything was going well, until the pilot explained that a missing tire meant they would have to turn around mid-flight and head back to California. Even before they hit the ground, the media had reported an “emergency landing” for the world famous Friends alum.

Her gal pals do “goddess circles”

The gang finally got to Mexico and on night one they gathered in a “goddess circle” to toast Jen’s next chapter. The ritual (where the women sit cross-legged on cushions and pass around a talking stick decorated with feathers and charms) is something they’ve been doing for three decades now. There was a goddess circle before both of Jen’s weddings and for everyone else’s major milestones, too. A goddess circle, btw, is a kind of new agey spiritual practice where participants share their feelings and set goals in a non-judgmental environment

Even as she describes the goddess circle ritual, she seems to clock that the whole thing might sound a little West Coast woo-woo to your average NYT reader. “Should we just call it a circle?” she jokes.

During the interview, which takes place in Aniston’s gorgeous Bel-Air home, she has her terrier mix Clyde in her lap and jokes that she’s “like a weird dog person, it turns out, like a dog lady.” (Also worth noting: Jen’s gal gang did a goddess circle after she and her ex Justin Theroux said goodbye to their dog Dolly earlier this year.)

On The Morning Show Aniston plays Alex Levy, “a serious morning anchor whose personal life is complicated and professional life is more so, compounded by the sudden firing of her longtime co-host (played by Steve Carell) for sexual misconduct.” Sound familiar? Yes, the show is loosely based on what happened on Today with former host Matt Lauer, who was fired in 2017 for “inappropriate sexual behaviour“. Jen first got involved with the project before Harvey Weinstein was busted and before Lauer was fired. When that happened, “We basically just started over,” says Reese Witherspoon who is Jen’s co-star on the show and who is quoted in the article.

As any self-respecting Central Perk-er is well aware, Witherspoon played Rachel Green’s spoiled sister Jill (the one who hooked up with Ross, not the one who pierces baby Emma’s ears). “We were so psyched,” says Witherspoon of the chance to work together again, nothing the rarity of a show that has “two very, fully fleshed out female leads in one project.”

She has a BFF you’ve never heard of

While Aniston gets a lot of attention for her famous friends (and Friends), it turns out her bestest of besties is Kristin Hahn, her long-time producing partner and friend of more than three decades. Hahn is part of the 50th b-day gang that knew her when. (They call themselves “The Hill People”, btw. Because they all lived on the same street in Laurel Canyon back in the day.)

As well as starring on the show, Aniston is also a producer. Her style is described as “detail-oriented” (by Hahn), “thorough” (by series creator Michael Ellenberg) and “involved with every set, with every costume, with every piece of casting” (by Witherspoon). Hearing about her colleagues words Aniston says that they are all, “basically nice ways of saying ‘obsessive.’”

We’re not on network TV anymore…

In the accompanying photos, someone is clearly feeling her Canadian tuxedo. Double denim is cool, people. Jennifer Aniston says so!