The activist and actor's recent arrests are just the latest in her long history of getting arrested for civil disobedience. 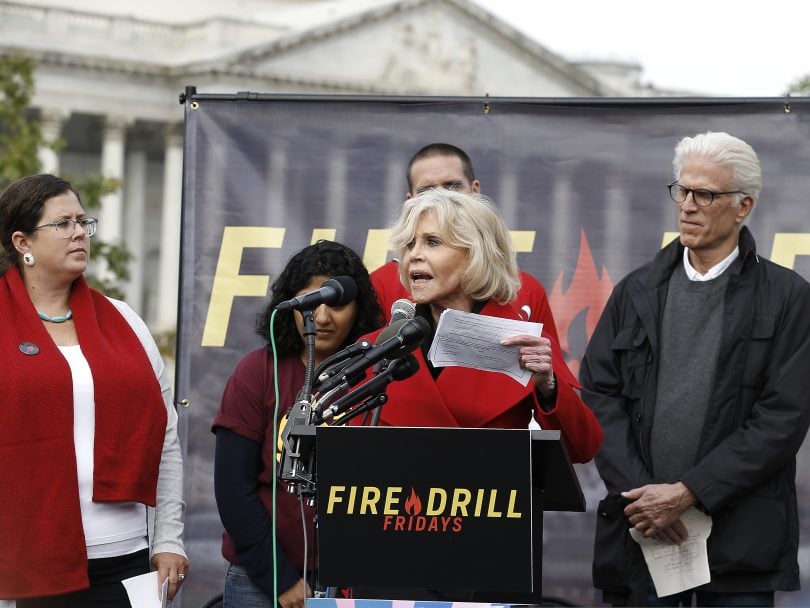 It’s Friday…do you know where Jane Fonda is? Since the 81-year-old activist and actor launched her Fire Drill Fridays campaign for climate change last month, famous faces from Ted Danson to Catherine Keener have joined her in some good old-fashioned civil disobedience. But what exactly is Fonda protesting? Why is it illegal? And where did she get that red coat?

All of your burning (pun intended) questions answered below.

What are Fire Drill Fridays?

That’s the name of Fonda’s weekly protest sessions on the steps of Capitol Hill. The Grace and Frankie star recently relocated to be closer to the epicentre of the fight for climate justice. “I’m going to take my body, which is kind of famous and popular right now because of the show and I’m going to go to [Washington] DC and I’m going to have a rally every Friday,” Fonda told the Washington Post last month before launching her campaign. She has protested (and been arrested) every Friday since October 11, alongside a number of famous friends: Ted Danson, Sam Waterston, Catherine Keener and Rosanna Arquette. Fonda says her campaign has taken inspiration from the next gen—the name “Fire Drill Fridays” is a reference to teenage activist Greta Thunberg who said, in reference to the climate crisis, that “our house is on fire.”

Will Fonda be there every Friday?

That’s the plan. She has pledged to be on the Capitol every Friday for 14 weeks, which means 10 weeks to go. Spoiler alert: she recently told The Hollywood Reporter that future protests will likely include appearances by Kyra Sedgwick, Taylor Schilling, Mark Ruffalo, Ben & Jerry (of ice cream fame) and—of course!—Lily Tomlin, a.k.a. Frankie.

What exactly is she protesting?

It’s not one specific thing so much as the overall lack of action in addressing the climate crisis, as laid out in a 2018 report from the International Panel on Climate Change (the one that said we have 12 years to save the planet from irreversible climate disaster). Each week Fonda—who drives an electric car and has solar panels on her home—has focused on a different sub-topic (how the climate crisis affects women and girls, the oceans, military and the war). She is a fan of the Green New Deal, the proposed legislation created by Democratic Senator Alexandria Ocasio-Cortez (and supported by presidential hopeful Bernie Sanders) that calls for an overhaul of our current economic system to save the planet. Critics say the plan is unrealistic and prohibitively expensive, while proponents (including Fonda) point out that we won’t have an economy to care about if the earth is destroyed. She has said that making the necessary changes under the current administration is not possible given Trump’s support for the fossil fuel industry. (She calls Trump an “oil president.”)

Has Trump said anything back?

Of course he has! Speaking at a rally in Louisiana, the President mocked Fonda’s history of activism, noting that she gets arrested “every 25 years.”

The president’s math is a little off. Fonda was arrested in 1970 on suspicion of drug trafficking. It happened at the Cleveland airport while she was returning from a series of anti-Vietnam War campus sit-ins in Canada. Fonda says the drugs they found in her luggage were vitamins and that her arrest was part of the Nixon administration’s effort to discredit her activism. As well as passionately and controversially protesting the Vietnam War, Fonda has been an activist on behalf of the women’s movement, the rights of Indigenous peoples, and against the Iraq war.

What exactly is she being arrested for now?

Broadly speaking, it’s civil disobedience. Technically, it is illegal to “crowd, obstruct or incommode” the entrance of a building, which is what has led to the multiple arrests of Fonda (and her friends). For the first three weeks she was handcuffed, booked and then released. Last Friday she actually spent the night in jail.

To clarify: It was not jail jail, but a holding cell for individuals awaiting sentencing. It was cold and at one point she loaned her coat (yes, that red coat, more below) to a woman who was cold. Eventually though, she had to ask for it back to use as a mattress. “The conditions weren’t great for old bones like mine on a metal slab,” Fonda said during a recent appearance on The View.

What’s up with that jacket anyway?

Fonda says she bought her signature protest garment (one that she has worn every week and that inspired a lot of 2019 Halloween costumes) on the sale rack. She wanted something red to connect with the fire theme. The double-breasted wrap coat (she has declined to identify the label) will be her last-ever clothing purchase since, she says, fashion consumerism has made a significant contribution to the climate crisis.

Why not just protest without breaking the law?

Because (as Fonda she said on the same The View appearance), “climate activists have been doing this for 40 years…we’ve marched and we’ve rallied peacefully and the fossil fuel industry is doing more and more and more to harm us and our environment…We have to up the ante.”

How can I help?

The Fire Drill Friday website provides instructions on how to take action locally. Or head down to Washington and join her. (Preferably using green transportation. Don’t forget to bring a warm coat.)