Flannery Dean comments on the romantic pairing between the world's most celebrated bachelor and his soon-to-be missus. 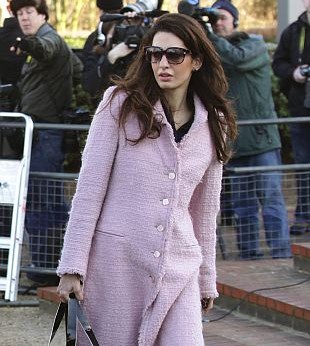 As we’re all aware, George Clooney, the world’s most celebrated bachelor, is engaged at the ripe old age of 52.  His intended Amal Alamuddin is 36.

But that’s not the most interesting headline that’s been prompted by the announcement. This one from New York magazine — “What is this goddess doing with George Clooney” — wins most provocative headline. That’s right. For the first time some are wondering if George Clooney is dating above his station.

That may be down to the fact that the object of the actor’s affection is a bit different from his established type, i.e., she’s neither a cocktail waitress nor an actress/model (not that there’s anything wrong with that, to borrow a phrase from Seinfeld). Amal Alamuddin is a Beirut-born, Oxford University-educated human rights lawyer based in London. She’s defended some pretty high profile personalities, including Wikileaks founder Julian Assange and embattled Ukrainian prime minister Yulia Tymoshenko. The 36-year-old professional is no slouch when it comes to her C.V. — and she’s not exactly homely either. In fact, she falls into the beautiful category.

But is she too good for Clooney, as NY Mag writer Kat Stoeffel playfully suggests in her short piece? Possibly. There is a pretty vast difference between pretending to be a humanitarian or a hero — or acting like one in a film — and being one in real-life as Alamuddin appears to be.  But then again, both are professionals at the top of their game, so it kind of evens out in the end.

The Clooney backlash, or the idea that he’s dating up, may have something to do with his romantic past. It’s hard to feel all that celebratory about Clooney finally hunkering down with such a prize gal given the fact that he’s left a trail of women in his wake. (I wonder what some of those women, who are being implicitly dissed as non-worthy simply because they don’t hold an Oxford degree, thought or said to their best girlfriends when they read about Clooney’s engagement…)

If the romantic universe operated with any justice the suddenly tame, commitment-ready bachelor would fall madly in love with a commitment-fearing bachelorette and years of pleading would ensue. But that’s probably a little too much like the plot of a crummy rom-com.  In life — even in tabloids — it’s probably wiser to wish everyone well and move on.