In honour of Rivers' prodigious comic output and sass, we've rounded up seven of the legendary comedian's funnier moments. 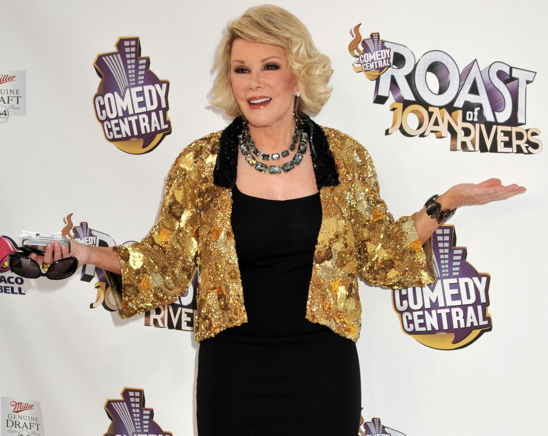 Let’s here it for Joan Rivers! The veteran comedian was raunchy, rude and bold in an era in which even men balked at being so wickedly human. She never once appeared to worry about being likable, but preferred to chase the more ambitious goal of being funny. Rivers was an original that carved out her own comedic niche and in so doing gave a generation of women license to do the same.

The comedian and Fashion Police host passed away Thursday at the age of 81 due to complications after surgery. In honour of her prodigious comic output and unbelievable nerve, here are seven of the legendary comedian’s funnier moments.

1. Joan the newlywed makes fun of the sacred union

In this 1966 appearance on the Sammy Davis Show (hosted by her mentor Johnny Carson) the newly married Rivers cracks wise on everything from infidelity to the myth that men really just want an old-fashioned girl.

This 1967 clip from Rivers’ appearance on The Ed Sullivan Show remains culturally relevant, which is both funny and sad. In the clip, Rivers sticks up for single women and blasts a culture that considers a 30-year-old woman a dead woman walking while simultaneously celebrating a 90-year-old bachelor as a “catch”.

“It’s been so long since we had sex I can’t remember which one of us gets tied up,” quips Joan during a hosting gig on The Tonight Show in the early 80s. After dishing on her lackluster sex life with her husband Edgar, she goes on to take down one of the era’s sweethearts: Marie Osmond.

Rivers finally took the helm of her own late-night talk show on Fox in the fall of 1986. The move made her the first woman to ever host her own national late-night talk show but it also lost her the affection and respect of mentor Johnny Carson who banned her from ever appearing on the Tonight Show again.

Rivers’ gig would only last a season, but the first night was peppered with her signature sass and TMI disclosures — not to mention wacky guests like Pee-Wee Herman and David Lee Roth. It also featured a funny segment in which she interviewed “fans” of the show… on the premiere episode.

Rivers promotes her “vicious” book I Hate Everyone…Starting With Me on Stern in 2012. The then 79-year-old comedian is as frank, funny and “furious” as ever taking on Chelsea Handler, Octo-mom and Oprah. How’s this for jaw-droppingly Rivers-like: “Oprah is Steadman’s beard… even Abraham Lincoln didn’t have this big a beard.”

Joan Rivers was known and loved (and possibly hated) for her frank assessments of celebrities. Her unabashed snarkiness, and occasional viciousness, made her the perfect host of a show like Fashion Police, which called for big attitude. Here, see her crack wise on Sarah Jessica Parker: “Is it just me or are her arms continuing to grow…she could sit in a beach chair and reach for a coconut.”

To see more, E! has collected some of Rivers’ most brutal moments.

Never one to shy away from being crude, Rivers plays a reluctant Mrs. Robinson to Louis CK in a season 2 episode of the FX comedy series Louie. Before she consents to make love to comic Louis CK. she tells him he can never tell anyone they did it. “Nobody likes necrophiliacs,” she quips.