The HBO series has opulent drawing rooms, meddling relatives, gossiping servants and plenty of lesbian intrigue. Here’s everything you need to know about why you’ll be hooked. 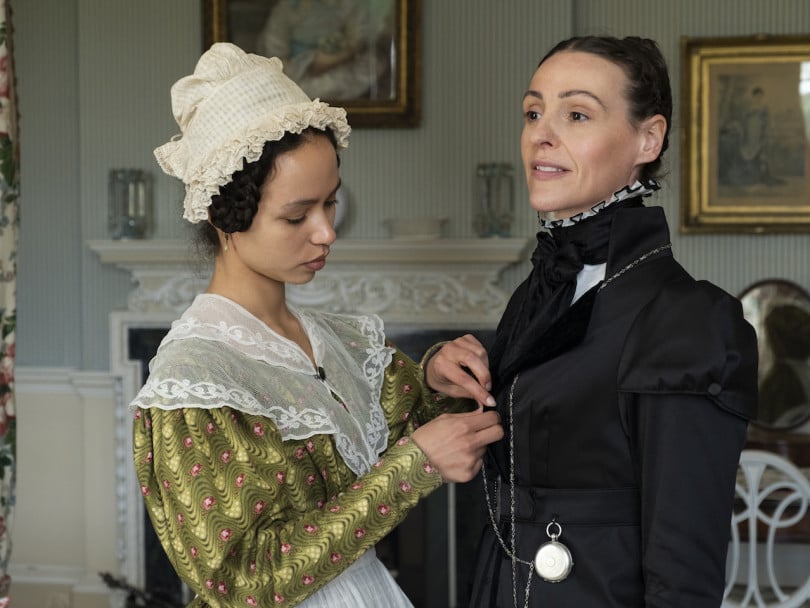 The romantic costume drama, once the exclusive domain of a soggy-shirted Colin Firth and his foppish brethren, has taken a decidedly Sapphic spin. Keira Knightley seduced Parisian belles in last year’s Colette, the upcoming Vita and Virginia depicts the torrid love affair between Virginia Woolf and Vita Sackville-West, and who can forget the epic battle for the title of Queen Anne’s girlfriend in The Favourite?

The latest addition to the old-timey lesbian canon is Gentleman Jack, a new HBO-BBC collaboration from the delightful brain of Sally Wainwright, the cultishly popular British showrunner known for the crime drama Happy Valley and the septuagenarian love story Last Tango in Halifax. Wainwright grew up in Halifax—the one in Yorkshire, not Nova Scotia—and visited the local manor, Shibden Hall, many times as a kid. Years later, she learned Shibden was home to Anne Lister, a queer Victorian diarist and feminist hero. Wainwright first pitched a show about Lister as early as 2002—and it took almost two decades before network executives were willing to air a show about a dashing lesbian seductress. It was worth the wait: her new series is full of sweet romance, wry humour and plenty of steamy sex scenes. Here’s a primer.

So why is she called Gentleman Jack?

Anne Lister, a wealthy Victorian landowner, was known to her Haligonian neighbours as “Gentleman Jack” for her rakish swagger and her tendency to dress like Benedict Cumberbatch at the Met Gala. In addition to Shibden Hall, which she inherited from an aunt in 1836, she made money off mining, stone quarries, canal projects and railways. Of course, she was also a prolific bodice ripper: over the years, her lovers included schoolmates, aristocrats and socialites. In 1834, she took communion with her true love, the heiress Ann Walker, and thereafter they considered themselves wife and wife.

I’m in Downton Abbey withdrawal. Will this hold me over until the movie?

Absolutely! Gentleman Jack is set about 80 years earlier than Downton, and Lister was an industrialist, not an aristocrat, but it scratches the itch for plummy British accents, candlelit opulence and pining couples kept apart by a tight-lipped, priggish society. And as the title character, Suranne Jones is more seductive and charismatic than all of Lady Mary’s bland suitors combined.

So what’s this I hear about a secret lesbian diary?

Lister wrote some 6,600 pages worth of diary entries, totalling four million words. She started writing them when she was 15—in school exercise books, on loose-leaf paper, whatever she could find—and kept at it until she died at age 49, when she contracted a fever from a bug bite in Russia. The bulk of the diaries cover the usual mundanities, but the juicy stuff—about one-sixth of the entries—is written in a secret code she invented herself, called “crypthand”: it’s a blend of algebra and the Greek alphabet. That’s where she described her sexual adventures and passionate love for other women.

Anne’s sister looks familiar. Do I know her from somewhere?

You sure do! Marian Lister is played by Gemma Whelan, who you might recognize as Game of Thrones’ Yara Greyjoy, Queen of the Iron Islands. Other famous faces: Suranne Jones, who plays Anne Lister, starred as Rachel Bailey on Wainwright’s previous show Scot and Bailey; and Sophie Rundle, who appears as Anne’s true love (named…Ann), was Richard Madden’s beleaguered wife in The Bodyguard.