A farewell to TV's Leslie Knope, a real woman's woman

Parks and Recreation may be over, but Knope, we'll never forget you. 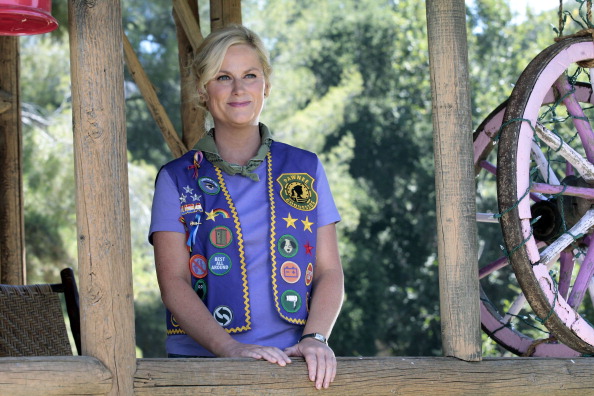 Rest in peace, Leslie Knope, proud daughter of Pawnee, Indiana, and fierce (if fictional) feminist icon. That’s not a spoiler: Leslie didn’t die in last night’s finale of the beloved and grossly underwatched Parks and Recreation. But this is (be warned): As the final episode projected five years or more into the future of its characters, it reveals that Leslie’s destiny is a brilliant one. She moves on from highly capable civil servant to successfully run for political office, becoming a two-term governor and possibly, it’s hinted, the president. Along the way, she enjoys a happy and enduring marriage and the devotion of a tight-knit circle of friends.

Not that any of that was ever in doubt. Played by the glorious Amy Poehler with steely goofballness, Leslie was loving, generous and stubborn, with a keener’s ambition and a do-gooder’s drive for public service. (The best summary of Leslie’s values is a Teddy Roosevelt quote she cites in the finale: “Far and away the best prize that life has to offer is the chance to work hard at work worth doing.”) What’s more Leslie was a feminist through and through.

She wasn’t glamourous, or high flying like Alicia Florrick and Olivia Pope, or jaded and snarky like Liz Lemon. Leslie was sunny, determined, practical and funny. She believed in her own talent, sometimes leaving pep talks for herself on her own voicemail, and once said that if she had a stripper’s name it would be “Equality.”

A recent episode — one of the series’ most pointedly feminist ones — in which Leslie’s husband Ben (Adam Scott) was running for congress had Leslie under attack from feminists, anti-feminists and men’s rights group alike. Her crime was to opt in then opt out from a pie-making contest featuring candidates’ wives. (The loser of the last such contest, Leslie said, “was women.”)

Her frustrated speech to critics was the kind of perfect retort that all of us wish we would have said at one point in our lives,  “I am now going to give you permanent answers to all of the silly questions you’re going to ask me and every other woman in this election: ‘Why did I change my hairstyle?’ I don’t know, I just thought it would look better, or my kids got gum in it. ‘Are you trying to have it all?’ That question makes no sense! It’s a stupid question. Stop asking it. ‘Do you miss your kids when you’re at work?’ Yes, of course I do! Everybody does! And then, you know, sometimes, I don’t.’” And the whipped cream on this feminist waffle was that Ben jumped in at the end and said, “By the way, no one has ever asked me that question.”

Yet for all that Leslie represented progress on a professional level, the brightest aspect of her feminism was her love for the other women she surrounded herself with. When cat fights are still a fallback theme in a lot of pop culture, Parks and Recreation’s emphasis on female compassion and mutual support was a revelation. The women were a diverse slate of characters not one-dimensional types, from Ann, a sweet, laid back and lovelorn nurse, to broody, twisted April, to confident, savvy Donna. The show aced the Bechdal test. Leslie showered her pals them with memory scrapbooks and endearments and even created Galentine’s Day — a holiday to celebrate female friendships. In her spare time, Leslie led a troop of Pawnee Goddesses, a group of girls whose motto was “We’re freaking awesome.” (This was clearly a nod to one of Poehler’s side projects, the Smart Girls at the Party web series.)

In her sweetly bombastic way, Leslie Knope presented an image of modern womanhood in which a person could be ambitious and sweet, successful and flawed, passionate and a little bit silly. And if the show too-neatly and too-narrowly wrapped up its plot lines in a series of married with kids happy endings (that’s not every woman’s dream, after all), then at least all the guys were the kind of dreamboat helpmates who put their wives’ careers ahead of their own. Better still, Leslie always made clear that her friends were her soul mates as well as her husband.

On February 13, a friend included me and a dozen other women in a newly adopted annual ritual, a pre-Valentine’s Day mail-out to all her favourite ladies. She was inspired by Parks and Recreation, she said, and her card read: “Roses are red, violets are blue, I love smashing patriarchy with you. Today is the best day of the year. It’s Galentine’s Day, a day to celebrate amazing female friendships.” I swooned, of course. Leslie Knope lives on.