The vivacious actress showed off her prowess in a recent interview with boyfriend Andrew Garfield. 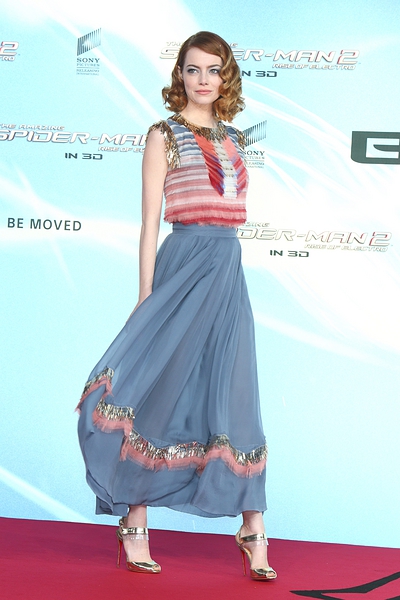 Actress Emma Stone distinguished herself recently as a force to be reckoned with during a Q&A in support of the upcoming Spider Man 2 movie (via Huffington Post) in which she stars with real-life amour, Andrew Garfield.

During the session a boy in the audience asked Garfield, who plays the titular web-throwing character, how Spider Man got his costume.

The amiable actor answered the boy by saying “He made it. He made it with his bare hands. He sewed it… It’s kind of a feminine thing to do, but he really made a very masculine costume.” (You can see the exchange in a GIF created by Huffington Post here).

Stone, who was sitting next to Garfield, didn’t let the “feminine” comment slide. Instead, she asked him in front of the audience what he meant by the term feminine.

“It’s feminine how?” she asked.

Garfield, perhaps taken aback or more likely realizing that he’d inserted his foot in his mouth with the silly comment — I, for one, have never sewn anything and don’t think “feminine” when I see a line of stitching — replied to Stone by saying “It’s amazing that you took that as an insult.”

Stone, who indicated more curiosity about the implicit association between needlework and femininity than annoyance, pressed Garfield to answer.

His response was about as goofy as his first comment. “It’s feminine because I would say that femininity is about delicacy and precision. We all have feminine in us, young men.”

Stone’s bemused smile indicated she was getting a kick out of watching her boyfriend dig himself in deeper with the audience. Though Garfield’s comments are relatively harmless and no doubt he’s kicking himself for saying something just plain goofy, Stone is being lauded for calling him out on it — for being a good girlfriend and a smart woman.

Garfield may be playing the superhero in the movie, but in real-life Stone is showing greater courage and savvier instincts.