Flawed white men were once a hallmark of prestige television. Not anymore. 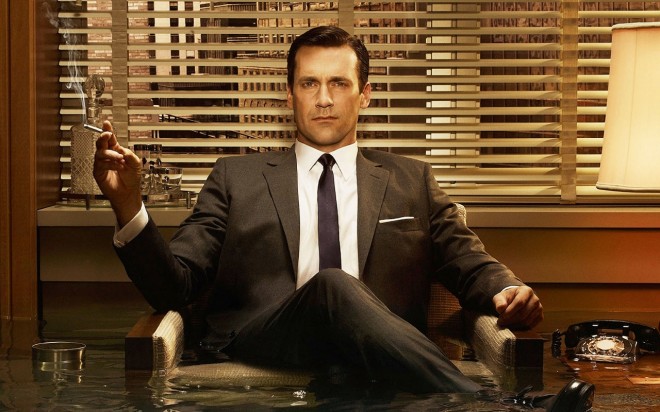 Whatever may happen on the finale of Mad Men this coming Sunday (and the weird predictions and crazy theories abound!), two unforgettable images from the second half of the final season have already provided satisfying pay-off. The first was Peggy Olson swaggering down the corridor at McCann Erickson like she runs the joint, sunglasses on, cigarette dangling, octopussy painting in her arms. The other was Don Draper alone at a bus stop on a country road, jobless, homeless, wifeless and carless — and happier than he’s ever been.

Taken together, these two flawless images reconcile Mad Men’s big themes and story arcs, mainly the twinned fates of Peggy and Don (she comes into her own in advertising just as he deserts the industry) but also the necessity of accepting one’s true nature (Peggy’s ambition, Don’s rootlessness), the inevitability of age giving way to youth and, finally, as journalist Hanna Rosin might put it, “the end of men and the rise of women.”

Set over the course of the 1960s, Mad Men has tackled the decade’s political and social upheaval overtly and with stealth, presenting the ways that major events like the civil rights movement, the war in Vietnam and women’s liberation played out in homes, workplaces and relationships. Through Peggy, Joan and Betty, we got a window into women’s lives in a pre-birth control, pre-job-equality, pre-feminist era. Change has come — somewhat — see badass Peggy above, but the series concludes with guys still on top. The bros at McCann Erickson are entitled establishment incarnate and while Roger Sterling may chafe at being stuck on the “geriatric floor,” the silver fox has his millions and his new girlfriend to console him.

Don’s dreamlike drift, however, offers a glimpse of the future. The show’s creator, Matthew Weiner, has said that he wanted to tell the story of man like him, “who was 35 years old and had everything and was miserable.” Handsome, rich, talented, lady-killing Don was just that: the most privileged of people and the saddest among them, the lies beneath his successful façade were a deprived and abusive childhood, a shameful secret and a stolen identity. Don’s storyline seems to be driving him towards destruction either literal or symbolic. He is no longer the man he used to be and no longer the hero of the narrative.

TV-wise, life in this case imitates art. Don Draper’s conclusion coincides with the demise of television’s solitary anti-hero. The flawed male protagonist that once flourished on prestige TV is nearly extinct: gone are Tony Soprano (The Sopranos), Walter White (Breaking Bad), Raylan Givins (Justified), Dexter Morgan (Dexter) and Jimmy McNulty (The Wire) — all guys who we rooted for, even when they were loathsome.

The anti-hero’s white male outrage, his callousness and his self-absorption feel out of step with the current cultural moment. These last few years have witnessed a powerful new era of civil rights activism in the form of the #blacklivesmatter movement, alongside the cultural resurgence of Indigenous people, the growing clout of immigrants and migrants from the south and east to the north and west, and the revitalization of feminism.

Social media has given marginalized people a voice, and new outlets for distribution like Netflix and Amazon have broadened and mixed the pool of writers and directors, offering opportunities to more women and people of colour. Our screens are increasingly filled with fierce, flawed and complicated women, and racially and sexually diverse ensemble casts — Scandal, How to Get Away with Murder, The Good Wife, blackish, Jane the Virgin, Fresh Off the Boat, Modern Family, Orange is the New Black, Transparent, Girls and Veep. Empire, a juicy nighttime soap featuring a rich black family running a music company was TV’s biggest and fast-growing hit in a decade.

Matthew Weiner created Don is his own image, but it was Betty who offered the perfect epitaph for Mad Men in last week’s show when she said, “it’s been a gift to me, to know when to move on.” It’s a statement not just about an artist getting ready to say goodbye to a creation, but also about moving on from a type of character, too. Don Draper’s time is over. It’s not that his story, and the story of other conflicted white male anti-heroes doesn’t matter. It’s just that there are many more untold stories to tell.

More by Rachel Giese:
Gay, straight, whatever: Maria Bello ditches labels, and it’s awesome
Our royal baby, ourselves: Why we’re obsessed with Princess Charlotte
Life (and death) lessons in Kate Atkinson’s A God in Ruins