Dan Levy's Instagram is the best thing about Schitt's Creek

Everything about launching a new TV show — from billboards to late-night tv loot bags — gets Dan Levy very excited. 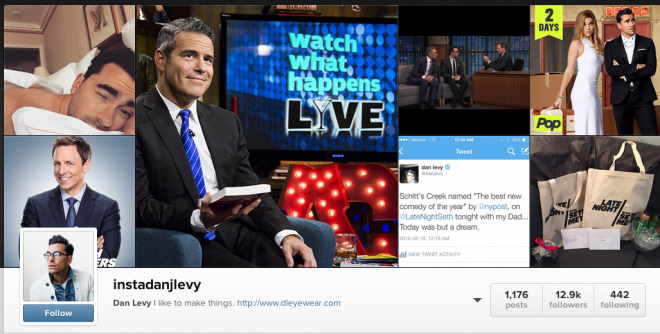 Whether you’re watching CBC’s Schitt’s Creek or not, you really should be following co-creator Dan Levy on Instagram. He’s the ultimate fan-boy of his own show, which he also stars in alongside his dad, Eugene Levy, and Catherine O’Hara. In advance of its U.S. launch tonight, the New York Post calls it “the best new comedy of the new year.” But the New York Times disagrees: “Whatever energy was associated with the show seems to have been spent on thinking up the title.” While Dan hasn’t posted that review, he’s documented nearly every other moment of the show’s journey — in the most delightful way.

It's all too much for me to handle. Thanks for the love and support. I'll see you tomorrow, Canada!

Levy is understandably stoked the night before the Jan. 13 of his show, a comedy about a uber-rich family who loses it all and moves to . . . Schitt’s Creek.

While Levy’s show is a contemporary take on Green Acres, the title tips a hat to another classic, Dawson’s Creek.

Friendship is flipping a row of People magazines at an airport kiosk. You're a rebel, @anitagatto. And I like it! 😉

Levy gets snap happy every time he comes across Schitt’s Creek advertising. Be it at an airport magazine stand . . .

Spotted on Sunset f*cking Blvd! *eyes roll back as he passes out* @poptvpics @schittscreek

Or on Sunset Blvd. in Los Angeles.

Or above a Mexican restaurant in New York.

Press tours are fun, especially when you’re a nerdy writer and get invited to National Public Radio.

And when you get loot bags.

Thank you x 10 to @holtrenfrewmen (@paulsmithdesign @prada) for my duds last night. Hope I did you proud!

And also when your dad gives you the seat closest to Seth Meyers.

I may not be showing it right now, but I'm screaming inside that Schitt's Creek premieres in America tonight! 10pm on @poptvpics. www.poptv.com to find your channel! …I also may or may not need to pluck my unibrow. 😳

Self-deprating, self-promotional selfies are the Schitt!