Bad Moms is awesome — except for the really bad dads

Why is the stress of parenting solely the domain of women? 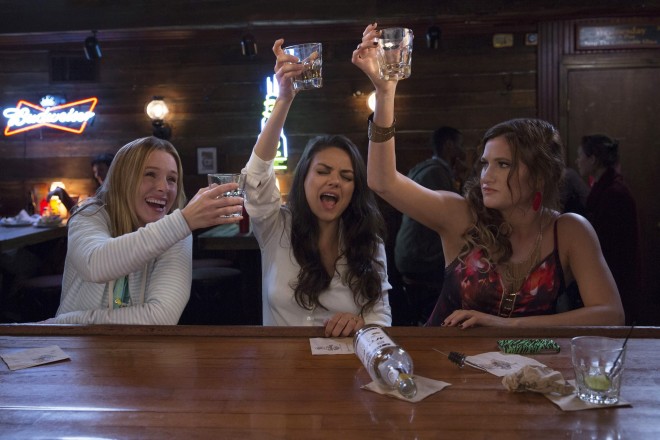 Women everywhere will no doubt flock to Bad Moms this weekend, a movie about reclaiming your pre-parent identity, binging on self-indulgence and raising a big, fat middle finger to “perfect PTA moms” everywhere. And so they should. I’m not a film critic, but I am a working parent in a constant race against time, fuelled by a steady diet of guilt, exhaustion and shame. This movie is, in many ways, my Citizen Kane. But there’s one plot point that’s got my 40ish knickers in a knot.

The film centres around three women who find an unlikely bond in their realization that they have no more f***s to give. Mila Kunis plays Amy, the hard-working soccer mom whose life is one mad rush — to school, to the office, to the vet, to school, to soccer, to the grocery store, to home — on repeat. Kristen Bell is a repressed stay-at-home mom of four, trapped in mousey cardigans and a fog that smells of baby puke. And the wonderful Kathryn Hahn plays a sexed up divorcee determined to show Kunis and Bell there’s a better way to live.

The three of them have fantastic chemistry. When they get drunk and make a midnight run to the grocery store, defiling every eggplant, milk jug and cereal box in sight, it’s pure gold. There are a lot of plot points, of course, that don’t ring true. Kunis doesn’t seem particularly fussed about finances when her sudden absenteeism at work leads to her being fired. Bell doesn’t think twice about who will look after the kids when she darts off to a matinee. And the “PTA moms,” led by Christina Applegate, are a particularly vicious breed. But these kinds of convenient tropes are typical of Hollywood comedies — sacrifices to advance the plot and poke fun at archetypes. 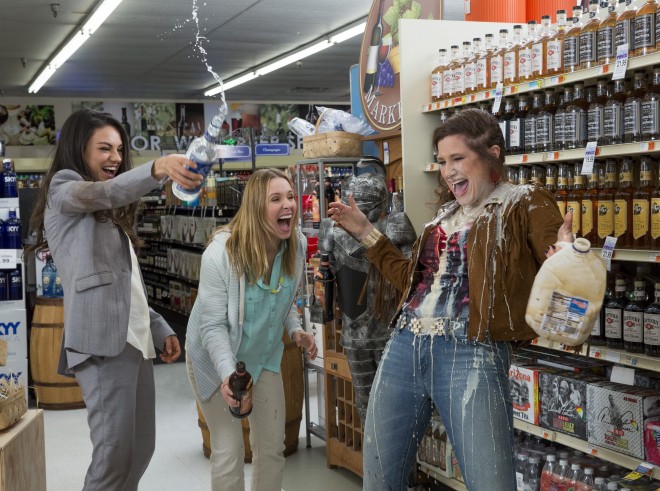 The portrayal of one group, for me, however, was a total misfire: the Bad Dads. Kunis’s husband is the typical doofus dad, an oversized child with no impulse control. She dumps him when she finds him having Skype sex with another woman, a virtual affair he’s been carrying on for months. Bell’s husband treats her like a nanny, a means to a meal and a clean house, calling in a panic after being left to tend to the children for a short amount of time. There’s no real mention of Hahn’s ex. And we never see the partners of the PTA moms – they’re too busy, it’s implied, running boards, buying and selling stocks and mile-highing on the company jet.

So what, you might ask. A movie about moms, made for moms, relegates fathers to backseat roles and relishes in how little they actually get about parenting. What’s the big deal?

What rankles me is that, once again, the topic of the suffocating pressure of parenthood is the exclusive domain of women. No doubt there are plenty of uninvolved fathers out there who resemble the ones in this movie — but more and more fathers are taking on their fair share of parenting duties (and to the great benefit of kids, some research suggests.) They’re not doing this in a bubble — they’re feeling the dizzying pressure to balance work and family, and they’re probably even seeing an effect on their career. Writer Anne Marie Slaughter put a spotlight on this in her book Unfinished Business, and argued that in order to truly fix the imbalance of work and life, we need to include men in the discussion. And through the lens of a Hollywood comedy, it’s also just funnier when we do — it reflects the real comedy of errors that is a modern parent’s life.

Funny enough, it’s on this point — the treatment of dads in the movie — that it feels evident that the script was written by two men. It puts forward a particular vision of what women — and moms, especially — are supposed to find hilarious: men who are useless, selfish, utterly irredeemable as human beings. It may come from a place of well-meaning self-deprecation. But it’s also a little insulting, to both sexes — the same strain of humour that brought us doofus-dad sitcoms and cleaning product commercials where the husband can never quite figure out how to operate a mop. 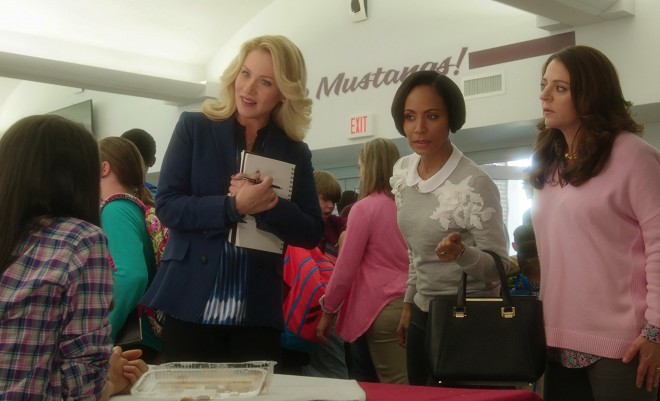 There is some truth to the fact that women love to take all of the glory as parent, even when they’re sharing the load. This is understandable because it’s the one place that women have owned for so long — before we had any power anywhere else, we were permitted control of the domestic sphere. We want — demand — to share the responsibilities more equally. At the same time, dads are often written out of the conversation even when they’re trying to elbow their way in. The majority of articles and columns that tease out the pressures of modern parenting are written by women and addressed to moms, not parents. Parental leave groups are the domain of women. We still scoff when men, in the thick of raising young kids, complain about being stressed out, or that they’re finding it hard to get ahead in their job. That’s our playground. No boys allowed.

But if we want men to be truly equal partners in the home, we can’t put a velvet rope around child-rearing, and open it only when it’s convenient to us. We need to share the space, be conscious of opening up the conversation to men, many of whom desperately want to be there. This is how many of us are often complicit in our own put-uponness — something that the writers of the film either don’t see, or didn’t feel they could say.

The dads in Bad Moms didn’t need to be vilified for the stress felt by moms to be any less real. These are minor roles — they could have been written as decent human beings, doing their best to keep up, and the film’s premise would have still worked: A movie about moms, made for moms, with just the slightest acknowledgment that modern parenting is hard on dads, too.

I know, it’s just a movie. And how many times have women been relegated to playing ridiculous foils on screen? But why bother keeping score. If you’re going to make a movie about what it’s really like for moms today, show the full picture — the uneven, sometimes unfair ways in which we involve and exclude dads who are also trying to do their best — which, in a way, is so much funnier.