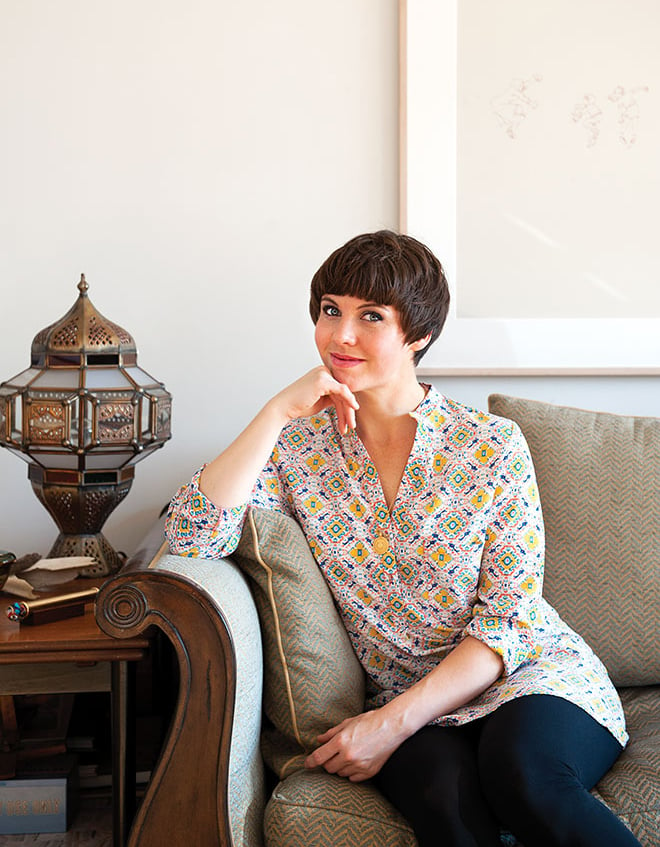 Sarah Neufeld is best known for causing a commotion. You may have seen her performing with the rock band Arcade Fire, whose latest album, Reflektor, is nominated for Best Alternative Music Album at the Grammys this year. She’s the compact dynamo with a violin under her chin, her bow a blur as she plays for tens of thousands of rapt fans. But when she’s not building to stirring crescendos, Sarah is an ace at keeping quiet.

The 35-year-old Montrealer has made her name in some of Canada’s most exciting musical acts — she’s also part of the instrumental post-rock group Bell Orchestre, and she released her first solo album, Hero Brother, in 2013. Offstage, though, she’s equally skilled in the art of asanas: Sarah is a trained Moksha and Modo yoga instructor and the co-founder of the studio Modo Yoga NYC in New York City, where she spends some of her time and which she considers a second home.

“When I’m in the band, the whole world revolves around this amazing frenetic travelling circus,” she says. “I started practising yoga more and more while I was a touring musician.” In addition to providing a necessary physical outlet after long days crammed into a tour van, that routine was grounding in the midst of so much travel. She took up the discipline in earnest at Moksha Montreal in 2005 and began training to be an instructor a few years later. “It felt like an amazing challenge,” Sarah says. “I had a supportive mentor at Moksha Montreal who allowed me to teach whenever I could. I owe it to her that I became comfortable in the room.”

Though her home is squarely in the urban bustle of Montreal’s Plateau neighbourhood, Sarah’s zen ethos is second nature — she was raised in a rural area of Vancouver Island. “Not a lot of people I know went on to be in rock bands,” she says. “I followed my nose because it felt important.” A self-described “driven” kid who took violin lessons, played guitar and was immersed in dance and theatre, Sarah moved to Montreal when she was 18 to study jazz and electroacoustics — basically, “the composition of electronically produced sound art,” she explains — at Concordia University.

At school, Sarah met Richard Reed Parry, a fellow electroacoustics student, and the two began collaborating on music to accompany performances in Concordia’s contemporary-dance program. That creative partnership evolved into Bell Orchestre, which they founded in 2001 with several friends. Bell Orchestre rehearsed in the same loft as Arcade Fire, which had recruited Parry to work on its recordings. He became a full member of Arcade Fire, and Sarah followed his lead. “It turned into a life of being in bands and touring,” she says.

That peripatetic life doesn’t necessarily lend itself to creating a sense of home, but Sarah, who shares her Montreal apartment with her sweetheart, Polaris Prize–nominated baritone saxophonist Colin Stetson, does her best. “Whenever I have time to be in a space, it’s centred around the practices I do every day — yoga, meditation, violin technique or writing songs.” Some necessities: enough room for a yoga mat, essential oil, a well-curated playlist, an AeroPress coffee maker.

Even when her external life is chaotic, Sarah cultivates tranquility within her own songs. She’s currently working on a second solo album and finishing up her first joint recording with Stetson. Though these personal projects may not receive the Grammy accolades generated by her other band, they provide balance. She’s figured out a way to find calm within the storm.

I wake up in the middle of the night thinking about . . .
melodies.

My guiltiest pleasure is . . .
binge-watching HBO.

My favourite band of all time is . . .
impossible to decide!

My favourite moment of the day is . . .
morning coffee.

Calling out of Context
by Arthur Russell