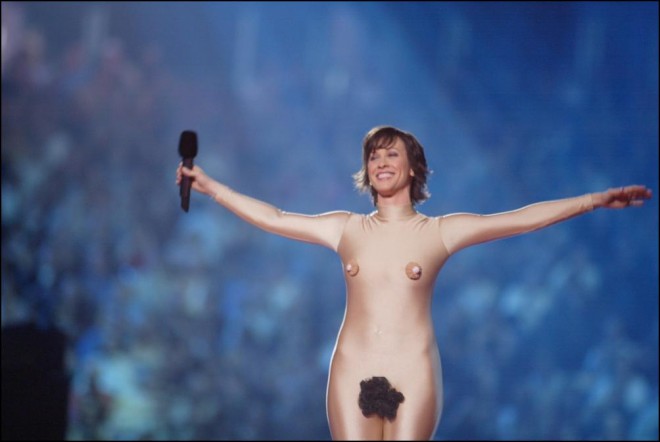 2. When opening for Vanilla Ice in 1991, she was instructed not to look him in the eye.

3. She still has post-traumatic stress disorder from the Jagged Little Pill-era: “It was a profound violation. It felt like every millisecond I was attempting to set a boundary and say no and people were breaking into my hotel rooms and going through my suitcase and pulling my hair and jumping on my car,” she told the Guardian.

4. But she has always kept her sense of humour. Exhibit A: This viral spoof of Fergie’s My Humps

5. The first time she heard Bob Dylan was when she was five-years-old, sitting in the back of her parents VW, driving on the Autobahn — her family was living in Germany at the time.

6. She met former fiancé Ryan Reynolds at Drew Barrymore’s birthday party. They were engaged for three years and never married.

7. Alanis married Mario “Souleye” Treadway in 2010, after a series of high-profile relationships. “I would date people, and there would be something about me that would hit a brick wall with whomever I was sitting across from,” she told Oprah. “And with Souleye, when I first met him, I could see that there was this limitlessness to where we could go.”

8. On Christmas Day 2010, they had a son, Ever Imre Morissette-Treadway, and Alanis has become a vocal advocate of the attachment parenting movement: “I’ll be breastfeeding until my son is finished and he weans,” said Morissette. “I think it affords the child, when he grows up, to have a lot less therapy to go to.”

9. She took the ice bucket challenge and nominated Gloria Steinem.

10. “I live kind of communally,” she told Runner’s World, explaining she has futons all over the house.

11. She’s still happy she made this video — which she also directed — even though people told her it was not rock ’n’ roll enough: