A couch-potato forecast for the new year. 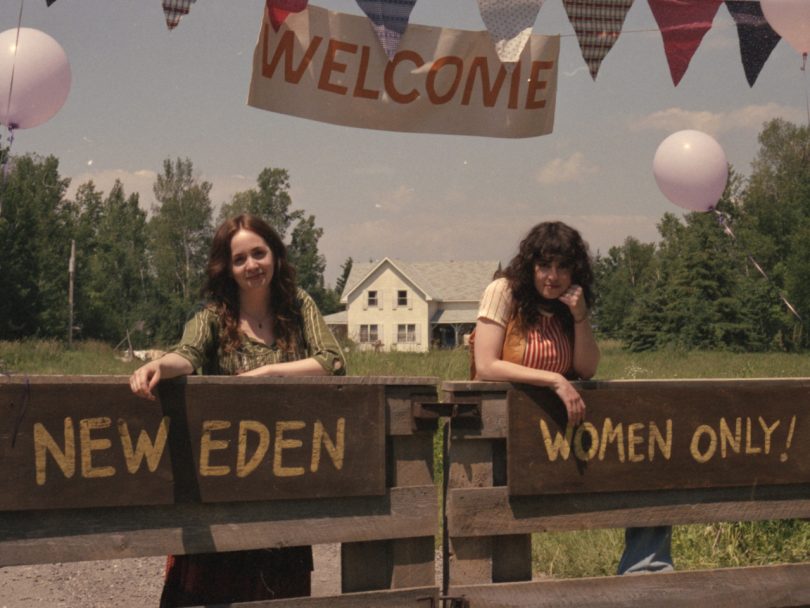 A mock doc about a kooky ’70s cult. Hugh Laurie cracking wise in space. A Stephen King novel gets the HBO adaptation treatment.

A New Year means a new slate of TV offerings. Here are 10 series to put on your radar for 2020.

You watched Wild Country and Going Clear. Now it’s time to inject a bit of humour into the all-too-familiar cult-gone-wrong storyline. From comic writers and performers Kayla Lorette (Kim’s Convenience) and Evany Rosen (Baroness Von Sketch) comes New Eden, a satirical take on the “bizarre cult” documentary.  The mock doc centres on a fictional “notorious” ‘70s cult described as a “paradise for women–until it wasn’t.”

The limited series premieres on New Year’s Day, which means you can binge all eight of the 30-minute episodes then.

How’s this for high-concept comedy? Forty years into the future, the rich are taking luxury cruises in space. (Psst, it’s not a great idea.) The futuristic comedy is another original offering from Armando Iannucci, the creative force behind the enormously entertaining political satires Veep and The Thick of It. Starring Hugh Laurie as the ship’s captain, expect humour as dark as a black hole, warp-speed quips and out-of-this-world performances from great British comic character actors (Rebecca Front!). Frozen’s Josh Gad also stars as the goofball billionaire (think Elon Musk meets Richard Branson) who owns the space liner.

It’s not easy to adapt Stephen King’s work for TV. But it’s always entertaining. Adapted from King’s 2018 bestseller of the same name, The Outsider stars Jason Bateman as a youth baseball coach accused of murdering an 11-year-old boy, a horrific crime that rocks the small Southern town where the series is set. It’s a grim, dark story that puts a supernatural spin on the familiar police procedural. Will The Outsider successfully fuse supernatural horror with the police procedural in its TV iteration? The trailer puts a great deal of effort into answering that question in the affirmative.

Love her or hate her, Gwyneth Paltrow is setting up a Goop pop-up on your go-to streaming platform regardless. It’s not clear how the reality show will play out, but it will reportedly feature Paltrow et al. taking “deep dives” into Goop-style wellness in 30-minute bursts. Paltrow has said the docu-series will feature “Goop staffers trying different healing modalities.” I’m very curious to see how the Oscar winning movie star is going to represent her controversial brand of rich-lady self-care for the masses—aren’t you?

Never Have I Ever (Netflix; TBC)

She’s done work-related comedy, she’s done the rom-com. Now Mindy Kaling is mining her adolescence for comic gold. The Mindy Project star and creator brings her scripted coming-of-age comedy to Netflix sometime later this year. No premiere date has been announced, but the series is reportedly based on Kaling’s youth, growing up as a whip-smart but temperamental teenager. The comic series even comes with a Can-Con hook: the series’ lead is Mississauga teenager Maitreyi Ramakrishnan, who won the part after Kaling held an open casting call via social media.

Even if you’ve never seen the iconic TV series starring Raymond Burr, you’ll still probably recognize the name Perry Mason. (And if you have no clue what I’m talking about, then you are young and should enjoy that and leave all the TV watching to the rest of us.) The legendary criminal defense lawyer (think a brainier Matlock) is being reimagined in the 1930s noir vein—a fact that apparently circles back to the character’s original literary origins. (Mason is the creation of famed American mystery writer Erle Stanley Gardner.) Matthew Rhys (The Americans) stars and the series is set in Depression-era L.A., which all but guarantees gorgeous costuming and film-worthy visuals.

You can catch a glimpse of the series in this clip of HBO’s upcoming releases:

Condragulations, Canada, you’ve finally made it—sort of. RuPaul’s reality series has (finally) sashayed North, but in true Canadian edition fashion there is no RuPaul at the helm. Instead, the series will use its guest judges as rotating hosts and eTalk’s Traci Melchor will act as the show’s den mother. Can this series be as addictive and glamorous minus its boldface attraction? Probably not. But I’m curious to see whether we can produce a superstar comparable to the glorious camp of the U.K.’s Baga Chipz or frosty hauteur of The Vivienne. Show us what you got, Canada.

A drama that pits Second Wave feminists against Conservative anti-feminists? This is the kind of drama I quite literally dream about seeing on TV. Mrs. America is set in the 1970s and dramatizes the real-life battle to ratify the Equal Rights Amendment in the U.S. (the amendment would have guaranteed the equal rights of women under the U.S. Constitution—it never made it into law). An all-star cast breathes life into this contentious cultural moment. Cate Blanchett plays Conservative lioness Phyllis Schlafly (she opposed ratification of the amendment), Rose Byrne is Gloria Steinem, Tracey Ullmann is Betty Friedan, Margo Martindale is Bella Abzug and Uzo Aduba plays Shirley Chisholm. Can’t. Wait.

Three years after The People vs O.J. Simpson (2016), producer Ryan Murphy fixes his gaze on another defining ’90s trial: the impeachment of President Bill Clinton. The series is based on New Yorker writer Jeffrey Toobin’s 1999 book A Vast Conspiracy: The Real Story of the Sex Scandal That Nearly Brought Down a President and even features Monica Lewinsky as a producer. Clive Owen will play Bill Clinton, Beanie Feldstein is Monica Lewinsky and Sarah Paulson will portray Linda Tripp (no word on who is playing Hillary.)

Downton Abbey writer and creator Julian Fellowes returns to TV with another period drama focused on the secrets and scandals of the upper crust and the lives of those that swim (or sink) in their orbit. Belgravia, which is adapted from Fellowes’ 2016 serialized novel of the same name (the story was originally released, Victorian novel-style, as a weekly series). Belgravia centres on the aftershocks of a night of passion decades after the fact. Belgravia isn’t the only period drama Fellowes has in the works. His much-anticipated series, The Gilded Age, is listed as coming soon to HBO, too.