There's a scientific reason behind our addiction to tales of TomKat, Brangelina and Paris 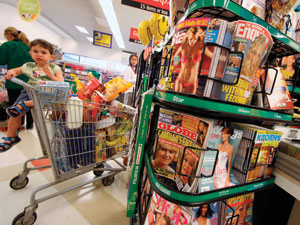 Charlotte De Backer was deeply concerned about her friend Nicole, and with good reason. Nicole’s behaviour had spiralled out of control. She’d been arrested for drunk driving and heroin possession and, newly skeletal, was battling what appeared to be a serious eating disorder. Perhaps even more alarming was how Nicole treated those who cared about her: She’d publicly feuded with her BFF* and, without warning, suddenly broken off her engagement to her musician BF**. Nicole’s nights were spent partying at the L.A. nightclubs Hyde and Teddy’s, her days recovering from hangovers with a non-fat, no-foam latte or roaming the racks at boutiques such as Fred Segal or Kitson (where she reportedly fainted once from lack of food).

Of course, Nicole Richie wasn’t really De Backer’s friend – not in the traditional sense, anyway. But when the 31-year-old evolutionary psychologist moved from her native Belgium to California in 2003 for her doctoral studies, she turned to supermarket tabloids such as People, Us and OK Weekly when she found it difficult to meet people. “I didn’t have a social life,” De Backer says with a laugh. What she discovered was a surrogate social circle among the celebrities whose secrets the mags spilled in candy-coloured headlines and sordid paparazzi photos.

For some, obsession with celebrities suggests psychosis. For De Backer, it became her life’s work. Initially her scholarly focus was on a well-probed subject in social science: gossip among legitimate friends and family – or, as she put it, “the economics of vicarious information transfer.” But when she returned to Belgium to pursue post-doctoral research in media and communications, she targeted her guilty pleasure. And while De Backer is one of the few experts in the world dedicated to the science of why we read the tabloids, she’s far from alone in reading them. There are few among us who can resist revelling in tales of Sir Paul McCartney’s divorce disaster, the astronaut-in-diapers love triangle or Britney’s meltdown, although it is women in particular who take to the tabs like cats to catnip. Circulation statistics reveal that 90 per cent of celebrity-magazine readers are women, with a total of 60 million women buying them weekly.

“People are born with a gossip gene,” says Bonnie Fuller, the Toronto-born tabloid diva and chief editorial director of American Media, Inc., which publishes the old-school National Enquirer and the celebrity-driven Star as well as other mags. “We’ve been gossiping since the dawn of time. We want to know about the powerful people, the beautiful people, the rich people and who they marry and mate with. I’m sure even in Egyptian times, people were gossiping about the pharaoh and his wife.”

Today, the celebrity universe is expanding with a frenzy on the Internet, with websites such as www.people.com, www.perezhilton.com, and Canada’s own www.laineygossip.com attracting millions of viewers in search of daily, sometimes hourly, “news” reports: “Sheriff: Paris was ‘deteriorating’ in jail” ran the headline of an urgent update on www.people.com in June. Interactive sites such as www.gawker.com encourage readers to send in celeb sightings to its Gawker Stalker feature. Sample entry: “Robert DeNiro. May 23 at 7:00 p.m. On Broadway and Grand being very patient with gawking passersby. Shorter than I would’ve thought.”

Tabloids have a history dating back long before everyone with a camera phone became a potential paparazzo. The word has a truly therapeutic origin, first emerging in 1884 when Britain’s Burroughs Wellcome and Company registered the trade name, a combination of “tablet” and “alkaloid.” Tabloid referred to medicines and other products the company produced, but came to be associated with anything that was compressed. In the early 1900s, newspapers adopted a smaller format to accommodate readers taking public transportation, and, with that, the term migrated into journalism. Following on the heels of the innocent movie magazines of the ’30s, with stories such as “Hollywood Stars Tell How to Be Happy and Loved” penned by Ginger Rogers, Joan Crawford, Gary Cooper, et al., the benchmark for tabloid journalism’s sleazy and sensational side was the National Enquirer, established in 1952 by the American publisher Generoso Pope Jr.

De Backer completed her first major study about gossip in 2005 with her Ph.D. thesis, “Like Belgian Chocolate for the Universal Mind: Interpersonal and Media Gossip From an Evolutionary Perspective.” She argued that our addiction to tabloids is rooted in our brain chemistry: Just as chocolate can set off the same endorphin euphoria in our brains as having sex, celebrity gossip lights up our neurons in pleasurable ways. “It is widely known for humans that chocolate stimulates the release of endorphins, and therefore eating chocolate stimulates feelings of happiness,” wrote De Backer in her thesis. “Gossip is also an instant stimulator of endorphins.”

Given this reasoning, our tabloid addiction is simple enough: We’re stressed out and we like the rush the rags give us. Better yet, we can enjoy them without fear of any of the remorse or retaliation which so often follows soon after dishing on real-life friends.

But probing lower down the brain stem, our habit of reading the tabloids, like sex itself, is much more primal. We are programmed to seek social knowledge through gossip because it is important to our own survival to know who is sleeping with whom, and who is meeting with success and failure.

“People who were not highly motivated to keep up with the affairs of others were not as successful at managing relationships or getting and keeping mates and allies, so they were not as reproductively successful as those who did,” says Frank McAndrew, a psychologist at Knox College in Illinois. “We have inherited a predisposition to keep tabs on other people that are the same age and sex as ourselves, as these were our main competitors for status and mates in our ancestral hunter-gatherer groups.”

Our cavewomen kin, in particular, relied on forging friendships and alliances for survival. Leaving their tribes to join their new mates, those women who were better at gossiping were better at surviving and thus passed the gossip gene down to their descendants.

“We females actually have special circuits for gossip,” says the neuropsychiatrist Louann Brizendine, the author of The Female Brain and the director of the Women’s Mood and Hormone Clinic at the University of California in San Francisco. She says that the female hormone estrogen not only increases the brain’s level of oxytocin, known as the hormone of social bonding and affiliation, but also amplifies the happiness-inducing chemical reaction that gossiping creates. “Talking intimately, telling secrets to each other, is fun and it gives our brain pleasure,” Brizendine says. “The pleasure circuits in our brain run on a fuel called dopamine, and estrogen increases dopamine.”

But what happens when we’re no longer living in caves? Love it or hate it, one feature of modern society is that celebrities are competing with friends and family as our closest community. Our incessant exposure to star culture on television and billboards and in magazines has tricked us into thinking that the stars themselves are part of our social network and relevant in our lives. “The tabloids are part of the way we now do larger social gossip,” says Brizendine. “We can’t tell secrets and gossip one-to-one-to-one; our society is now much bigger than a small circle of women. The gossip rags have become a way of connecting the dots.”

De Backer also suspects that women’s vulnerability to gossip mags is synchronized with our menstrual cycle, a hypothesis she will soon test in an upcoming study. “There is greater interest in tabloids during the high-fertility times of the menstrual cycle around days 10 to 14, when women perceive a higher degree of competition from female celebrities,” she claims. And, she adds, at this time of the month, women are also more inclined to fantasize about male celebrities, when our brains are intoxicated with an even stronger triple-shot gossip cocktail of estrogen, dopamine and oxytocin.

The discouraging news is that parts of our modern brains are still working the same way as our Homo sapiens ancestors’. Our urge to overeat made biological sense in that primal and food-scarce world, but today that urge can result in “maladaptive” binge eating, causing obesity, heart disease and diabetes. Similarly, our gossip addiction can have some ugly drawbacks. Pity the poor gossip hound, clicking Refresh on her favourite tabloid website every five minutes, only to be rewarded with yet another grainy shot of Matthew McConaughey doing ab crunches, or a crestfallen Sanjaya Malakar talking about life after American Idol.

“Rationally, if you think about it,” says De Backer, “you are spending time on the private lives of people who you never interact with on a real-life level. It’s a second life, a new life in a virtual community. But you are missing out on the real life that you should actually be living.”

Even De Backer admits that she begins to feel a little nauseous after endless days spent analyzing tabloid content, glossy page by page. “But then,” she says, “when I don’t read them for a couple days or weeks, it’s always very nice to go back to them again.”