Elizabeth Gilbert's bestselling memoir Eat, Pray, Love told the fairytale story of her journey of self-discovery following her messy divorce - including an unexpected romance. In her follow-up, Committed: A Skeptic Makes Peace With Marriage, out this month, Gilbert wrestles with the history and meaning of marriage as she reluctantly takes her second trip down the aisle. Here we share an excerpt from Committed 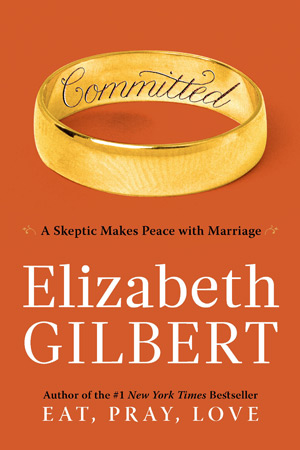 Reprinted by arrangement with Viking, a member of Penguin Group (USA) Inc., from COMMITTED: A Skeptic Makes Peace With Marriage Copyright © Elizabeth Gilbert, 2010

The transformation of marriage from a business deal to a badge of emotional affection has weakened the institution considerably over time—because marriages based on love are, as it turns out, just as fragile as love itself. Just consider my relationship with Felipe and the gossamer thread that holds us together. To put it simply, I do not need this man in almost any of the ways that women have needed men over the centuries. I do not need him to protect me physically, because I live in one of the safest societies on earth. I do not need him to provide for me financially, because I have always been the winner of my own bread. I do not need him to extend my circle of kinship, because I have a rich community of friends and neighbors and family all on my own. I do not need him to give me the critical social status of “married woman,” because my culture offers respect to unmarried women. I do not need him to father my children, because I have chosen not to become a mother—and even if I did want children, technology and the permissiveness of a liberal society would permit me to secure babies through other means, and to raise them alone.
So where does that leave us? Why do I need this man at all? I need him only because I happen to adore him, because his company brings me gladness and comfort, and because, as a friend’s grandfather once put it, “Sometimes life is too hard to be alone, and sometimes life is too good to be alone.” The same goes for Felipe: He needs me only for my companionship as well. Seems like a lot, but it isn’t much at all; it is only love. And a love-based marriage does not guarantee the lifelong binding contract of a clan-based marriage or an asset-based marriage; it cannot. By unnerving definition, anything that the heart has chosen for its own mysterious reasons it can always unchoose later—again, for its own mysterious reasons. And a shared private heaven can quickly descend into a failed private hell.

The emotional, financial, and even physical costs of failed love can destroy individuals and families. People stalk, injure, and kill their ex-spouses, and even when it doesn’t reach the extreme of physical violence, divorce is a psychological and emotional and economic wrecking ball—as anyone who has ever been in, or even near, a failing marriage can attest.
Part of what makes the experience of divorce so dreadful is the emotional ambivalence. It can be difficult, if not impossible, for many divorced people ever to rest in a state of pure grief, pure anger, or pure relief when it comes to feelings about one’s ex-spouse. Instead, the emotions often remain mixed up together in an uncomfortably raw stew of contradictions for many years. This is how we end up missing our ex-husband at the same time as resenting him. This is how we end up worrying about our ex-wife even as we feel absolute murderous rage toward her. It’s confusing beyond measure. Most of the time, it’s hard even to assign clear blame. In almost all the divorces I’ve ever witnessed, both parties (unless one of them was a clear-cut sociopath) were at least somewhat responsible for the collapse of the relationship. So which character are you, once your marriage has failed? Victim or villain? It’s not always easy to tell. These lines mesh and blend, as though there’s been an explosion at a factory and fragments of glass and steel (bits of his heart and her heart) have melded together in the searing heat. Trying to pick through all that wreckage can bring a person straight to the brink of madness.

I will do virtually anything to avoid going through that apocalypse again. But I recognize that there’s always the possibility of another divorce, exactly because I love Felipe, and because love-based unions make for strangely fragile tethers. I’m not giving up on love, mind you. I still believe in it. But maybe that’s the problem. Maybe divorce is the tax we collectively pay as a culture for daring to believe in love—or at least, for daring to link love to such a vital social contract as matrimony. Maybe it is not love and marriage that go together like a horse and carriage after all. Maybe it is love and divorce that go together … like a carriage and a horse.
So perhaps this is the social issue that needs to be addressed here, far more than who is allowed to get married and who isn’t allowed to get married. From an anthropological perspective, the real dilemma of modern relationships is this: If you honestly want to have a society in which people choose their own partners on the basis of personal affection, then you must prepare yourself for the inevitable. There will be broken hearts; there will be broken lives. Exactly because the human heart is such a mystery (“such a tissue of paradox,” as the Victorian scientist Sir Henry Finck beautifully described it), love renders all our plans and all our intentions a great big gamble. Maybe the only difference between first marriage and second marriage is that the second time at least you know you are gambling.

The vows that we make on our wedding day are a noble effort to belie this fragility, to convince ourselves that—truly—what God Almighty has brought together, no man can tear asunder. But unfortunately God Almighty is not the one who swears those wedding vows; man (unmighty) is, and man can always tear a sworn vow asunder.

All lovers, even the most faithful lovers, are vulnerable to abandonment against their will. I know this simple fact to be true, for I myself have abandoned people who did not want me to go, and I myself have been abandoned by those whom I begged to stay. Knowing all this, I will enter into my second marriage with far more humility than I entered into my first. As will Felipe. Not that humility alone will protect us, but at least this time we’ll have some.
It’s been famously said that second marriage is the triumph of hope over experience, but I’m not entirely sure that’s true. It seems to me that first marriages are the more hope-drenched affairs, awash in vast expectations and easy optimism. Second marriages are cloaked, I think, in something else: a respect for forces that are bigger than us, maybe. A respect that perhaps even approaches awe.
An old Polish adage warns: “Before going to war, say one prayer. Before going to sea, say two prayers. Before getting married, say three.”
I myself intend to pray all year.

Learn more about the book here.