Do you and your partner negotiate sex?

I can’t believe that I’m negotiating sex. Please don’t take this the wrong way. Things couldn’t possibly be going any better with my boyfriend. But I’m going to make a sweeping generalization, and say that most men want more sex than women. 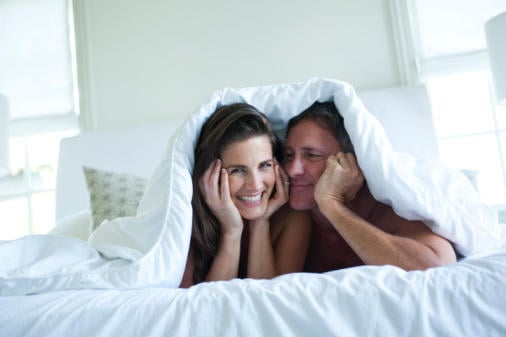 I can’t believe that I’m negotiating sex. Please don’t take this the wrong way. Things couldn’t possibly be going any better with my boyfriend. But I’m going to make a sweeping generalization, and say that most men want more sex than women.

Listen: I’m a single, working mother and I get tired and stressed. Sometimes at the end of the day I just want to watch Love It or List It!

Don’t get me wrong. I love sex, too. But everyone knows that after the “honeymoon” phase, you’re no longer having sex three times (or five times) a day. You wonder where you even found the time to do it so often. You actually start getting out of bed and doing stuff with your guy, like going to the movies, dinner, yoga classes, and taking him out on errand runs.

My boyfriend asked me what I think the “ideal” amount of sex is during a week in a healthy relationship. I answered honestly: “If you have sex at least three times a week, then I think that’s amazing.” My dude thought ten times a week was ideal. I pointed out that there were only seven days in a week and we don’t even see each other every day, so how could we possibly do it ten times a week?

But relationships, I’ve learned after so many years, are about compromise. I promised him four times a week and he came down to eight. To which I responded that that was still one more time than the number of days in a week.

“But what about morning sex?” he said. “That counts!”

After much back and forth, we actually negotiated a deal. (I didn’t sign a contract or anything.)

We are going to try to have sex six times a week, but for some of those times I get to be half-asleep ( as in morning sex, for example). Yes, this is how ridiculous the negotiations had become. During morning sex, I’m allowed to be 78 percent asleep and I don’t have to do anything.

Also, two of those six times a week have to be quickies. This lead to another conversation about what constitutes a “quickie.” To me, it’s 10 minutes or less; to him, it’s at least 20 minutes.

See how men and women are different? In any case, we were happy with our compromise about the number of times a week we plan to have sex, and I got the quickie down to 15 minutes or less. He has an important job and I work, and we both have children and seriously – we are going to have to work hard to make this number of sex dates happen. But after all that time spent negotiating, you can damn well bet I’m going to try to make it work.

The following day my guy sent me an email about why sex is so important, with one link compliments of LavaLife, and another compliments of Chatelaine.com. I ignored those and interviewed a handful of friends to ask them what the ideal amount of sex in a relationship is.

1. Once a week is ideal for one of my married friends, who is CEO of a big company. “But my husband would like it at least four times. We usually do it about three times a week, but I’d be happy with one,” she admits.

3. Another friend, in her honeymoon phase, says her new boyfriend can barely keep up with her, but he does. “But he loves that I’m aggressive with him. We’ll do it at least twice a night.”

4. A male friend says he wants it more than his wife – way more. He also gets upset when she doesn’t initiate sex with him. On average they do it once a week, twice if he’s lucky. Sometimes weeks go by when they don’t have sex.

5. Open communication is key when it comes to sex, says my therapist. So negotiating and talking about it is not a bad thing.

6. Another friend also negotiated with her husband, and funnily enough also put in a clause that she too is allowed to do nothing during morning sex.

So while I thought it was funny that my boyfriend and I were negotiating about the number of times we should be doing it in a week, it seems that it’s on everyone’s minds. Most men do seem to want it more (and they also want women to sometimes initiate it). What can I say? I should have been a lawyer.