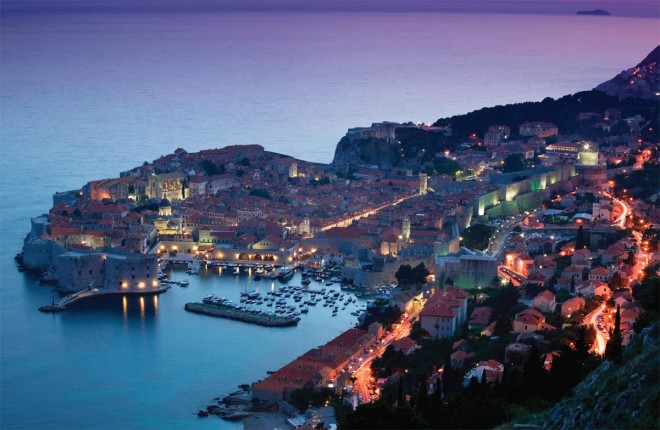 Nothing can prepare you for the view of Croatia’s beautiful Dalmatian coast from the deck of a sailboat. Tiny churches perch high up on hillsides, bottle-blue water gives way to white sandy beaches on nearly deserted islands, and perfect little villages gently hug horseshoe bays. Set sail on a week-long trip through some of Europe’s most stunning scenery. These islands have been luring sightseers since time began.

Day 1 — Dubrovnik: Cannes of the East
Dubrovnik’s heavy vowels don’t skip along in a sunshiny singsong like Positano, Capri or Santorini, the other European playgrounds it’s often compared to—instead, they conjure a post-Communist drabness. But that’s what makes the utter, heavenly surprise of this perfectly preserved, honey-coloured city balanced on a promontory over the sun-drenched Adriatic all the more powerful. It’s completely walled in, and the streets are paved with limestone so smooth that they literally gleam at night.

Dubrovnik was once occupied by Venice (Lord Byron called it “the pearl of the Adriatic”) and, as a result, baroque palaces and churches are everywhere. But despite its grand appearance, the city is buzzy. At night, tables from bars and restaurants spill onto the sidewalks and the air has a happy thrum. Don’t miss Café Buža, a bar reached via a tiny opening in the old town ramparts. Marked by a sign that says “Cold Drinks,” it tumbles down a series of terraces clinging to the cliff.

Wow factor: A UNESCO World Heritage city in the most sensational seaside setting.

Nota bene: Buy your supplies here, as it’s probably the only place with a big supermarket that you’ll visit.

Day 2 — Korcula: Picture Perfect
When you were young and you pictured the place where Rapunzel let down her hair, it probably looked a bit like Korcula. With its medieval towers, bridges arching over the streets and lanes so narrow you could leap across town on the rooftops, it’s the perfect setting for a fairytale. This is a piney, thickly wooded island with tons of quiet coves and secluded beaches to swim at, so haul in the sails and putter around until you find the perfect spot.

Day 3 — Hvar: Celeb Hangout
The view as you pull into Hvar for the first time is enough to make you weep, it’s so breathtaking. The harbour is edged by bougainvillea and ringed by perfectly faded Renaissance buildings. There’s a market overflowing with Mediterranean bounty (figs, olive oil, perfectly ripe peaches), where little old ladies dressed in black haggle over prices, and the lavender, for which the island is famous, gently scents the warm air. But it’s not just rustic charm; Hvar is the spot for the in-the-know crowd. They alight from their yachts as the setting sun turns the town pink and stroll along the waterfront to party in the chic quayside bars.

Nota bene: Ask your skipper to stop at Vis, a nearby island. Around 500 varieties of herbs grow here, and it’s also home to a fantastic restaurant, Konoba Bako.

Day 4 — Mljet: Unspoiled Paradise
This is the perfect post-Hvar detox. Over 70 percent of the island is a pristine national park covered by forest, and the rest is dotted by fields, vineyards and small villages. After lazing around on a sailboat, it’s nice to get the blood pumping. Moor the boat off the south side of the island next to Saplunara, and go snorkelling off one of the sandy beaches. Thanks to the lack of development, the sea here is rich in marine life. Or rent a kayak and paddle across stunning inland lakes like Veliko Jezero and Malo Jezero, the latter of which is home to an island with a 12th-century Benedictine monastery turned restaurant.

Wow factor: Untouched wilderness in the Mediterranean is hard to come by.

Nota bene: Have dinner on board, moored next to the national park so you can skinny-dip in the phosphorescent sea.

Day 5 — Sipan: Foodie Haven
Get your skipper to radio ahead and reserve one of the three mooring spots for Konoba kod Marka, which is, in many people’s opinions, the best restaurant in Croatia. It’s on the harbourfront of the tiny town of Sipanska Luka, on the west side of this sleepy island that during the 15th century was the place for Dubrovnik’s aristocrats to have their summer houses. As a result, there are romantic, crumbling palaces with carved stone lions and dramatic Romeo and Juliet–style balconies littering the island. You’ll be asked whether you want the meat or the fish option. Go for fish: The local orhan is sweet and perfectly grilled, and the shrimp in brown sauce are so mouth-wateringly tender you don’t even need to bother peeling them. The best part? Eating outside under the amazingly clear night skies dotted with bright stars.

Wow factor: One of the top restaurants in Croatia.

Nota bene: Don’t forget to call ahead to make a reservation! 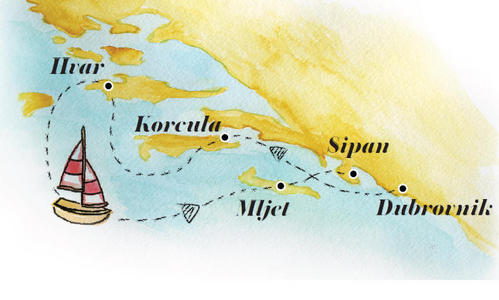