Debra Messing on being a mother, how she hit it big and her worst hair scares

Our favourite redhead reflects on the bumpy road to stardom, finding the perfect role in the hot TV show Smash and finally being able to live life on her own terms at 43 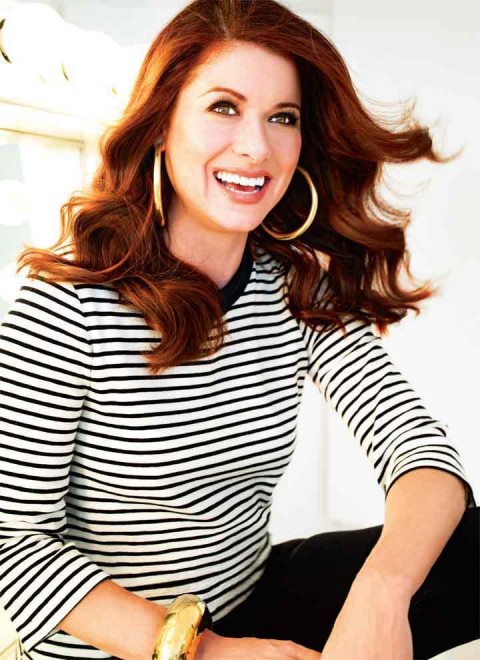 The pivotal moment in Debra Messing’s career — the one that propelled her from hearing clipped “thank yous” from casting agents to being courted for roles — happened one harrowing day in a Napa Valley Motel 6.

She wasn’t even a year out of grad school, belting out “Don’t Rain on my Parade” at auditions all over New York City when she landed her first film role in A Walk in the Clouds, playing the wife of then-mega-star Keanu Reeves.

“I’d never done a movie in my life,” she says. “I was a nobody.” And the powers that be decided that the brunette nobody would become a redhead somebody — but on the cheap. “Instead of taking me to a salon to have it done, the director had a personal colourist do it in the bathroom of the motel,” Debra says. “She was trying to lighten my hair, but the front half came out darker than the back half. So she decided to lighten that part more.” Then the problem was reversed. Then it reversed again. And again. “She bleached my hair 13 times in one day. By the end, she was in tears and I was a weird flaming strawberry blond. And she just decided to cover it with a colour: I had never even heard of Titian red, but essentially it’s neon orange.”

Despite her mangled scalp and the director of photography’s horror that her hair was going to clash with his muted set colours, Keanu was sweet, her scenes were shot and Debra returned to New York where she eventually had the red made less intense.

“After that, I got every single job I went out for. These were the same people I’d seen four months before. I was the same actress. But for some reason, people were responding to me differently. Back then, red was not a popular colour, which maybe made me stand out. And the rest is history.”

Hitting the big time
Lip-synching into a hairbrush on a national Clairol commercial was followed by brief appearances on shows like Seinfeld and NYPD Blue, then two seasons starring in the sitcom Ned & Stacey. And in 1998 she found herself cast as Grace, the messy, frenetic, hilarious best friend of Will. For eight years, the two formed one of prime time’s most groundbreaking, unorthodox and happiest couplings. It was during Will & Grace that Debra married her soon-to-be-ex-husband, Daniel Zelman, and had to farcically hide her subsequent pregnancy with strategically placed pillows on set.

If you watched Will & Grace (and, really, who didn’t?), Debra in person is a bit of a surprise. There is no frantic handwaving, no teeth-gnashing, no wailing. Now 43, Debra is calm in the way you think maybe you’d be if you started doing yoga all the time. She speaks slowly, carefully, confidently. But when the quick smile and the head-thrownback laugh appear, you get a happy sense of, “Oh — I know her!” A fleeting glimpse of a much-missed friend.

After Will & Grace ended, Debra took on The Starter Wife and small roles in films, but soon decided to take a well-deserved break so she could raise her son Roman (now seven). “Doing a sitcom requires so much energy. It’s relentless. It’s satisfying in a way that no other form of acting is, but it takes its toll on some level.”

Now she’s back. Her latest role, as Julia Houston on the NBC/CTV show Smash, is a homecoming, a dream project that combines many of her greatest loves: singing, Broadway, New York. Her character is a Broadway lyricist, working with her creative partner, Tom, to write a musical based on the life of Marilyn Monroe. At home, her character has a husband and teenager and — spoiler alert — a new adopted baby.

“I read it and called my agent back and said, ‘I have to be a part of this.’ From the time I was three years old, I wanted to be a Broadway musical star. To be able to live in that world and be on a show that was conceived by Steven Spielberg and the executive producers of the film Chicago? It just felt like, ‘Please. Let me be a part of this.’ To say that this is a job that fell from heaven and into my lap is no lie.”

Best of all for Debra, being a part of a large ensemble cast means she can spend more time with her son. “I have the best of both worlds: I am excited to get to work, but now I’m also able to go and pick up my kid from school. I just pass the baton to Anjelica Huston or Jack Davenport and say, ‘You’re up!’ ”

Moving forward
Debra has been quiet about the recent news that she and her husband are divorcing after 11 years of marriage, but when we spoke to her there were allusions that her life was about to be dramatically rerouted. “It’s a complicated and scary time,” she says carefully. “I think that if you wrote the fairy tale about it, it would be, oh [Smash] fell in her lap and she moved back to New York, the city she loved and always wanted to live in, and everything was easy. I hope that’s the end of the story. But the reality is that I have a family that is entrenched in Los Angeles and a son in school there. The logistical issues of moving and finding a home, a school . . . it’s daunting.” (Since our interview, Debra and her son have moved to New York.)

At the end of the day, her love of her work is nothing compared to how she feels about her son. “Becoming a mother was the most intense game changer on every level. Obviously your perspective changes, your priorities change. But the joy it brings, the sorrow, the fears, the worries, the responsibility — it dictates every aspect of your life. But life is also simpler in a weird way. The most complicated thing you can do, I think, is to have a child, because it’s 24 hours a day, seven days a week. It never stops. But there’s also a relief that comes — things that aren’t that important just drop away.”

1. Avocado on crackers: “It’s the best snack of all time; mush up an avocado and add fresh lemon and salt. Spoon a big tablespoon on a stone-ground cracker, then add more lemon and salt. It’s literally perfection.”

2. Kérastase: “They have this green deep-conditioning mask called Age Recharge. When my hair is fried, I’ll leave that on for half an hour, and it completely restores my hair.”

3. Sean Hayes (Jack McFarland from Will & Grace): “He’s the funniest person I’ve ever met. Until we die we will have that bond. We don’t see each other very often, but I love him to death. I think that he is a savant. Truly a comic genius.”

1. The bad perm
“I remember seeing ads with a Breck girl in a magazine, where her hair was perfectly curled and bouncy and shiny. I took the picture into the local salon and said ‘I want it like this.’ After hours and hours of those perm chemicals – it was so intense, I can still smell it – my hair was a tragedy beyond description. I just remember sitting there with my mouth agape, looking in the mirror. And she kept saying, ‘Oh, look how pretty you are!’ in this panicky voice. I have blacked out the period after that. I have no memory of going to school with that hair or how long it took to grow out. It’s for the best.”

2. The buzz cut
“I was at New York University, and I decided I needed a change – a little edge, a little sophistication. At the time, Linda Evangelista was one of the great supermodels. She had the shortest hair I’d ever seen, and I though, ‘What could go wrong?’ The plan was that I was going to get a Betty Boop and wear the biggest hoops I could find. So I get that done. I came home and my father looked at me and said, ‘Oohhhh, I don’t like that.’ I thought he was going to cry. You can’t do much when you’ve shaved you head, and I realized that unless I put on lipstick and big earrings, I would be mistaken for a boy. So whether I was wearing sweatpants or heading out for a bagel, I always looked like Beyoncé – but 10 years ago.”