The media mogul has a long list of credentials - CEO, producer, writer, host, and designer. Here are her tips on climbing the corporate ladder 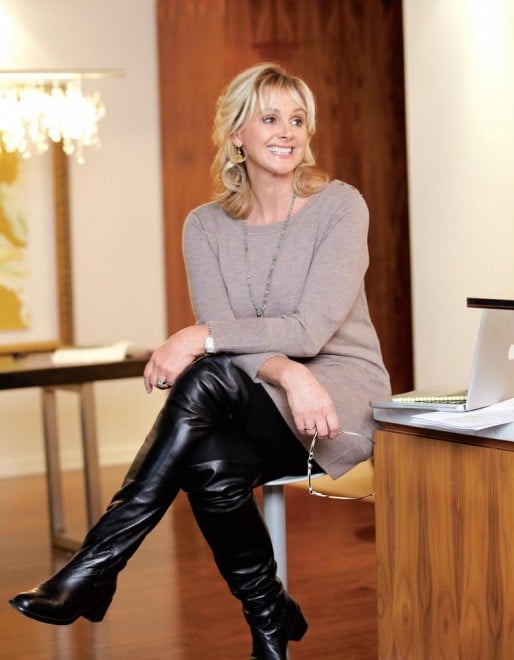 How would you describe your job? I’m a conductor. A conductor of creativity and solving problems minute by minute. Hosting my shows and running my production company means I have to make decisions the whole time. I’m also watching where the money goes, because when you own and produce the show, you’re driving it, it’s your stakes, your budget. I’m constantly saying things like, “What do you mean, it will cost $2,000 for painting a mural over there?”

Describe a typical day of work? We start at around 5 a.m. It’s horrible — I literally set my alarm to one minute before 5. Then Raquel, my makeup artist, arrives. I sit in my pyjamas and sip a cup of tea as she transforms me from looking like hell to being presentable. Next the director arrives, often with her two-year-old, who runs around, and we all go on set, where I meet with the art and film departments. The day usually begins with me screaming at the art department, “You spent what?” Then filming begins and as soon as the camera’s on I stop being so rude. We have to wrap the crews around 8 p.m. and then we head to the hotel and have meetings. People end up eating dinner at 10 or 11 p.m, they’re falling asleep in their soup, and then we start all over again the next day. In the summer we only had one day between shoots. I would ice my feet at night, they were so swollen.

What do you love most about your job? I think it’s the rush. The adrenalin. I just love the creativity. And when you’re in development it’s an incredibly tough process. You have an idea for a show, but then you have to find a network, finance it and get it on air. It’s a two-year process and is kind of like having a baby. Then I put a team together and walk away.

How do you hire people? I love to hire people who are better than me, because you get very tired of being the one teaching everybody. I’m a great believer in getting out of the way and letting people do their jobs.

What do you wish you could change about your job? I’d like to be a little more patient and maybe a little kinder at times, but I know I won’t be. I’m actually getting worse as I get older.

What personality traits do you need for your job? Thick skin and the ability to multi-task. That’s why there are more and more women who are very good at production. There’s no actual degree you can take; people come from all walks of life. Most female producers I’ve worked with started as runners.

Your proudest career moment? The funniest one was when I won two Geminis in the same night. It was so exhilarating. I won, and before I was off the stage I won again. So I went back to the table and I called the kids and said, “Guess what? I’ve won!” And my son said, “Listen, Mom, I’m on the other line, can I call you back?” But I think the proudest moments are when people come up to me and say, “I started my job, or a paint business or went into design because of you.” To be a trailblazer is a nice thing.

How did you get your start? I was a model and I really hated it. It was a very unkind industry. You’d have to go on bikini castings and parade around in front of a bunch of drunk advertising guys. I was doing a shoot in Amsterdam and there was a woman there who had a yellow clipboard and she was directing everyone: “You, over there! You, move here.” And I thought, “I want that job! I want to be that person.” I wanted authority. So I got back to London and started interning at the BBC. On my first day, I thought my heart was going to jump out of my body with happiness.

Was there a pivotal moment for your career? Crashing a party in Cannes where I met this nice guy, Hans Rosenstein, who worked for the CBC in Montreal. We were married three weeks later and I came to Canada. I was in shock for a year, I was so stunned to wake up in another country doing a man’s dirty laundry. I couldn’t even speak French and I couldn’t get back into production. So I started doing painting effects (marbleizing, tortoiseshell, Tuscan stone) and made a how-to video of the techniques I learned — and women loved it. No one else was doing decorating on TV. I started to get onto chat shows in the U.S. and Canada — cable networks were just starting, and someone said, “Why don’t you turn this into a show?” So I started this little program called Painted House.

Best career advice you’ve ever given? Do what you enjoy. If you know what you like and you know what really excites you, keep looking for opportunities to get to that thing. It’s so easy getting into my business but it’s not easy staying; it’s about always being there, being liked, being on and thinking ahead. And if you’re going to sweep the floor, be the best sweeper in the world.

What advice were you given? I think the only advice I ever got in school was when you had three choices: nurse, teacher or wife. I was told, “Nobody’s going to marry you — you’re not very clever and you’re not very bright.”

How do you juggle your professional ambition with your personal life? I think the most important thing about working and raising kids is to a) have a sense of humour and b) explain to your child why you’re tired, grumpy, etc. You can’t underestimate how even small children think it’s their fault if Mom’s in a foul mood. If you bring them into your world, even if you feel they may not understand it, they do understand. I am very close to my two sons. I wrote a book about it called Not Guilty. You’re going to be riddled with guilt anyway — but try not to be, there’s absolutely no point.

How do you unwind? Girlfriends and a good bottle of wine, like a vino nobile de Montepulciano. I can’t think of anything better.

If you weren’t in TV, what would you do? I’d run a vineyard. I love Tuscany and I’m in the process of getting my own place there.

What do you see yourself doing in 10 years? I’d like to be in my vineyard in Italy, with lots of people around me. I just want to be in good shape, happy and healthy, not in a gutter somewhere.