My dad doesn't like being the focus of these blogs. But today, I'd like to pay homage to Dad, because it's finally the day to celebrate him. 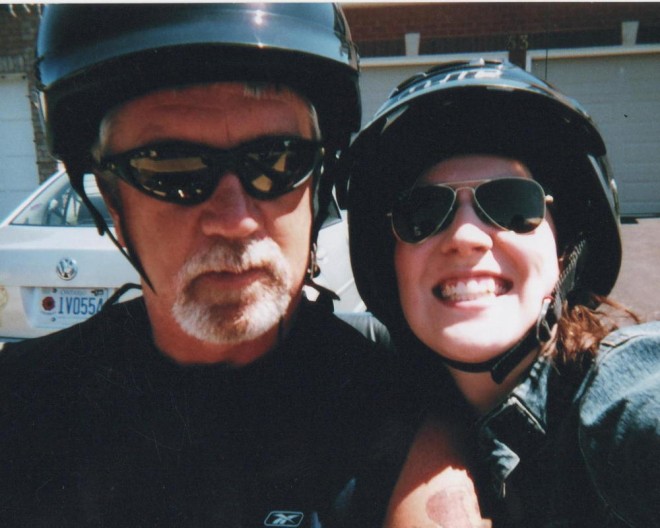 I’ve written quite a few times about my dad. If it weren’t for him, I’m not sure I would have ever joined the military, partly because he nearly dragged me there at the slight mention of the idea (joke Dad!) and partly because he always supported me no matter what I did. Regardless, I’m appreciative to him for making be believe I could do it. He always was good at that.

Now although I’m horrified upon realizing that I didn’t write a post about my fantastic mom (because Mom, you indeed are, fantastic) for Mother’s Day, I still feel a need to go ahead with this post. Because my relationship with Dad goes beyond father/daughter. It is soldier to soldier. Comrade to comrade. There’s a respect there that transcends everything else. He’s not just Dad. He’s Major (Retired) Bill Thompson, and I love him to bits.

This photo was taken a eight years ago, right after I returned from basic training. This is the day before I found out my leg was broken and the day before Dad broke his hand, which I affectionately call the sympathy break (neither of us could bike ride for the rest of the summer!). I was tired and malnourished and in pain and Dad’s solution was a bike ride; the thing that is the most calming to him. My dad is happiest on his bike and with my mom, sister and I, who he lovingly called “Bill’s Broads” as we were growing up. And it was meant entirely as an alliteration ladies and gents: No degradation to women intended.

The thing about my dad is that he believes in me no matter what. He supports me no matter the mistake and no matter the mean words I might have said just hours before. He willingly accepts that his gender is greatly outnumbered in our house so he bent to give my sister and I what we wanted just often enough to indulge without, and not so often that we were spoiled. I grew up appreciating the value of a dollar, understanding that all people deserved to be treated fairly, and realizing that hard work would get me anywhere I wanted to go. I grew up loved and cuddled every single day and he never stopped telling me how proud he was, especially during every step of my journey out here to Vancouver.

Never one to be a lazy parent, Dad was always outside playing with my sister and I. There were many a fun game of Nerf gun shooting, putting lessons in the backyard and camping expeditions on the motorcycle. I was his assistant when repairing cars and the faithful worker in his deck building.

Yes, my dad is many things. A few parts kindness, a few more parts educator, part friend, three parts soldier and officer. But above all, my dad is all parts dad. He is someone I can go to for anything. He was and continues to be anything anyone could ever want in a dad, and I’m proud that he’s mine.

Dad, I know you never really wanted your photo on here but this one’s a goodie. Thanks for being there. When I was young and stupid, thanks for occasionally being quick to anger (I take after you in that way) but then even quicker to forgiveness. Thanks for being someone I could look up to and admire. Most of all, thanks for being my guide post in the military, steering me towards right and wrong and teaching me that being an officer was more than just being a leader.

Happy Father’s Day Dad. I promise to be there next year.