Dad, I hope you understand

As I finish the last of my medical release paperwork, I'm reflecting on my relationship with my Dad and the job that has brought us closer together. 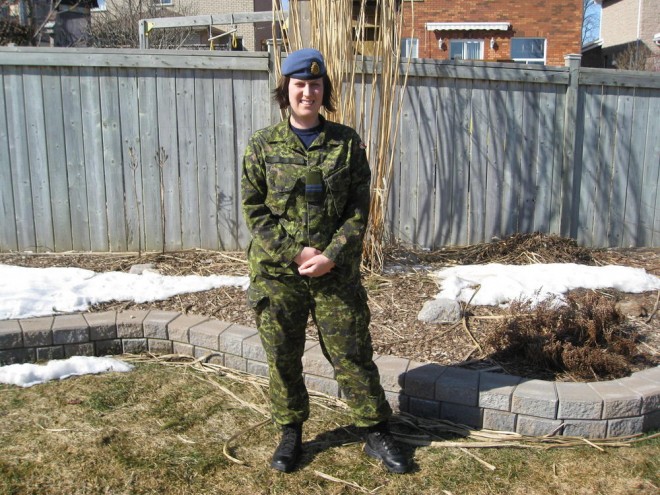 My Dad took this picture for me right before I handed in my uniforms, even though my Mom is the artsy one in the family. And in some weird way, it was a touching moment for us. We rifled through my kit bags and pulled out different pieces of gear, talked about how certain pieces had improved over the years, and in all likelihood, threw a few military acronyms in, which has become our own secret language. When we sit at the dinner table and talk, I think my mom and sister tend to feel a little left out because of that language. It isn’t because we aren’t all close, it’s just that there is something between my Dad and I that can’t be explained. Sometimes, I think it’s that military bond.

My Dad released from the military after an illustrious 35 years of truly admirable service. I watched his troops follow him with respect and often, I felt they would have gone to the end of the earth for him, if the military demanded it of them. When I was little, I didn’t understand why he was away so often. I missed him on birthdays, Christmases and other holidays. But now I know that he was gone because he had to be. He would miss holidays because he would go visit sick soldiers who were in the hospital or bring dinners to troops with no family close by. My Dad’s devotion to his job and his troops was something I always admired. I will always be haunted by the last line of his speech when he left the forces: “Being a Commanding Officer goes beyond 8-4. It’s about being there when your troops need you, no matter the time of day.” I have always functioned in the military with those words as my guiding force.

But as I’ve mentioned in other posts, my impending release from the military has made me cling to that relationship more than ever. I like that my Dad calls me sometimes to ask me Logistics questions that I can easily answer with my own knowledge. I like that we laugh about military intricacies. Most of all, I worry that new acronyms will be created, that I will no longer be a part of. In a weird way, the military is like a club. And once you hand in your ID card and your uniforms, suddenly you’re the last kid picked for softball.

Despite all of my worries, I know that if anything, my relationship can only get better with my Dad. Because we’ve both been through that stressful release process, feeling our way through the dark of a civilian life we don’t understand. And I know that no matter how scared I am, be it trying to navigate through provincial health care or if I’m feeling naked without the threads of my camouflage clothing, I know that I can call my Dad, and he will understand better than anyone.

Dad, I always said you were the officer I wanted to be. Thanks for always teaching me to strive for more and to be the kind of officer that other soldiers would respect.

I hope that in my short career, you can see that I always lived by your words of wisdom, even when it seemed like I wasn’t listening. I love you.