Fresh off a flight, the three-year-old had no response to the Canadian PM's attempt to befriend him — which the media cast as a mean-spirited snub. 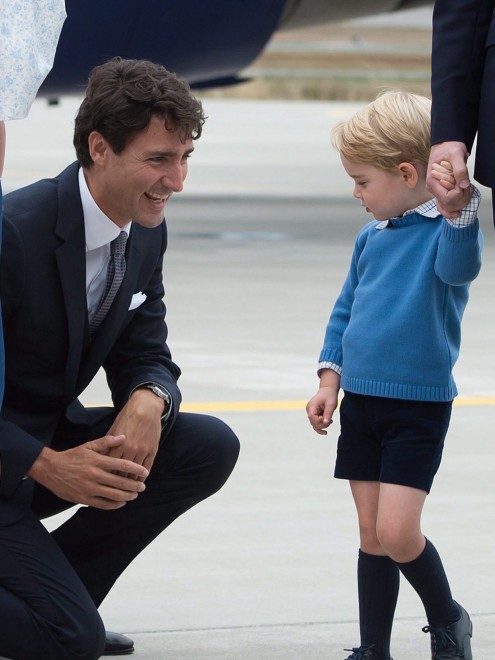 A near diplomatic crisis happened this weekend upon the Royal family’s arrival in Canada: After a long, transatlantic flight Saturday, three-year-old Prince George (a.k.a. wee Christopher Robin of Cambridge) wasn’t in the mood for games. As the rest of his entourage deplaned onto the tarmac in Victoria, Prime Minister Justin Trudeau — charmer that he is — squatted down and attempted a series of hand greetings: A low five. A high five. A handshake.

He got nothing back.

The swift (non) exchange was caught on camera and quickly picked up by international press, chronicled with a level of detail typically reserved for major sports replays or, you know, legitimate disasters. A sample of headlines to show just how whipped up the media got over this failed first greeting:

“Sorry, one doesn’t high five with commoners: Canada’s PM is left hanging as he attempts an awkward greeting with a VERY unimpressed Prince George at the start of the Royal tour” — Daily Mail

“Prince George to Justin Trudeau: Please Keep Your Filthy Peasant Hands Away From Me” — Jezebel

As humiliating as it is to to be totally “SHUT DOWN” by a pint-sized, knee-socked thumbsucker, we’re sure Trudeau — like us — was just impressed the preschooler wasn’t throwing a tantrum on the tarmac after being cooped up on a plane for hours. After all, this wasn’t our PM’s first “awkward greeting.”

More:
Will and Kate address heavy issues on royal tour
Kate and William in Canada: Photos of the royal visit
35 rain accessories to keep you looking cool — and feeling dry