The creator of Girls hopes sharing logs from her college journal will inspire young women to write. 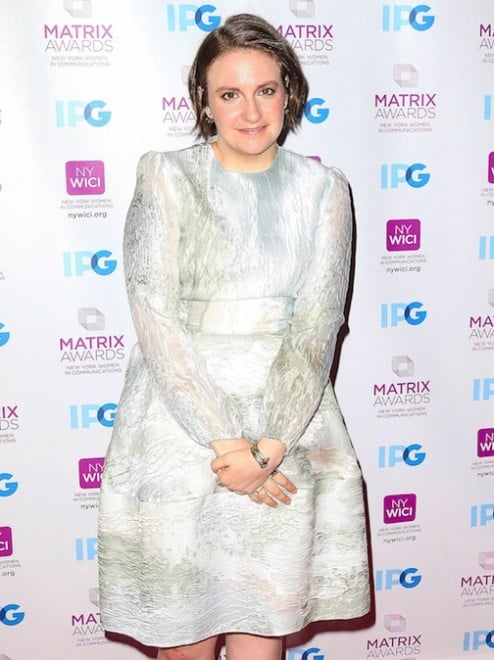 Yesterday, in a Beyoncé-style surprise, Girls creator and soon-to-be publishing mogul Lena Dunham dropped a new chapbook based on old journal entries called Is It Evil Not To Be Sure? She’d been searching through an old hard drive, she explains in the most recent issue of Lenny Letter, her newsletter, and found Word documents marked “Creative Snippets and Observations Journal,” which she’d composed in 2005 during her first year at Oberlin college as she flailed toward adulthood (and too many boys in tight pants, she jokes).

The daily log, which Dunham describes as a collection of “visual and verbal ephemera, emotional pleas and strongly worded messages of rage and pain directed at no one in particular” captures a young woman eager to turn her experiences, in all their ambivalent, exhilarating, disturbing truth, into art. By letting the world into the private, semi-formed musings of her 19-year-old self, Dunham hopes to encourage other young people to write, which is why all the proceeds of the 2,000-copy print run and e-book sales (print copies are gone; digital versions are infinite) are going to Girls Write Now, a New York City–based organization that provides high school girls with opportunities to learn the craft.

Reading through the hilarious, dark or grimly sexy snippets (it’s an R-rated read), I wished I’d had Dunham’s diary as comfort and encouragement when I was a 19-year-old, groping my own way toward humanhood. Here, five reasons why Is It Evil Not to Be Sure? is essential reading for young women. 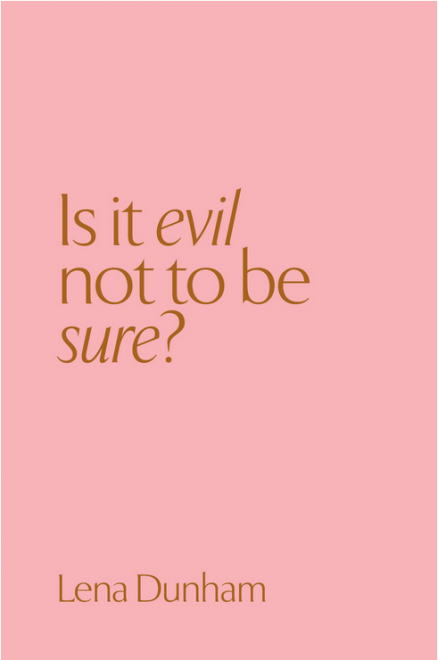 In the introduction to the book, Dunham writes, “I’ve always thought there’s something essentially radical about a woman deciding her life is worthy of writing down.” In the age of Twitter and the first-person industrial complex, it’s easy to forget that there are still plenty of women who don’t feel entitled to share their stories. Just committing yours to a Word document (or Moleskine or blog), Dunham argues, is an inherent statement that it’s worth recording, even if it’s just for your future self to read.

It’ll comfort the weirdo in everyone

Dunham likens her journal entries to planks on a raft that saved her from drowning amid the chaos and loneliness of her first year of college. Her thoughts, as fans of Girls can imagine, can be pitch-black (e.g. “I love her but it made me want to remove her dentures with a bomb”) and, like Hannah’s, they’re sometimes self-involved. But translating them into jokes and pithy observations, she says, helped her live with them. By sharing them, she helps you live with your own twisted thoughts (because, let’s be real, we all have them).

It captures the exquisite confusion of dating for the first time

As the title of the book suggests, Dunham seems to have been obsessed with the agonizing ambivalence that comes with growing up, particularly when it comes to fledging relationships. Instead of trying to tie tidy bows on her experiences or make perfect sense of her feelings, she revels in their messiness in sentences like, “I tell him we should just be friends then kiss him on the mouth,” “He says he’s desperate. I think, pick me!” and “It’s like babysitting, except I want to sleep with him.”

It makes it OK to admit to having bad sex…

The chapbook covers the autumn Dunham lost her virginity and, if the snippets are any indication, she had a lot of unsatisfying sex that year (as we all do at first). Observations like “Dry humping is alright but if the person isn’t kissing you it’s like a joke of degradation,” are unsettling, but they also ring incredibly true. Her willingness to acknowledge the gnarly power dynamics and less rapturous aspects of those first encounters creates a far more realistic image than those offered by the vast majority of pop culture.

The Dunham reflected in the book is, by her own admission, a hot mess. She writes in the introduction, “I once collapsed in a party dress from an enlarged spleen, I had all my wisdom teeth removed just so I could enjoy the pills… Oftentimes I barely had the energy to shuffle to the campus bookstore to buy Swedish Fish.” This is the same woman who now runs her own show, magazine and publishing imprint, so there’s hope for the rest of us.

More:
The most revealing thing about Lena Dunham’s lingerie photo
Everything you want to know about breasts — and then some
Can an app improve your sex life?