I’m Part Of A Growing Community Of Haida Language Speakers. Now, I’m Empowering The Next Generation To Embrace Our Language

For decades, colonial practices restricted the use of Indigenous languages in this country. Today, language revitalization is helping to set things right again. 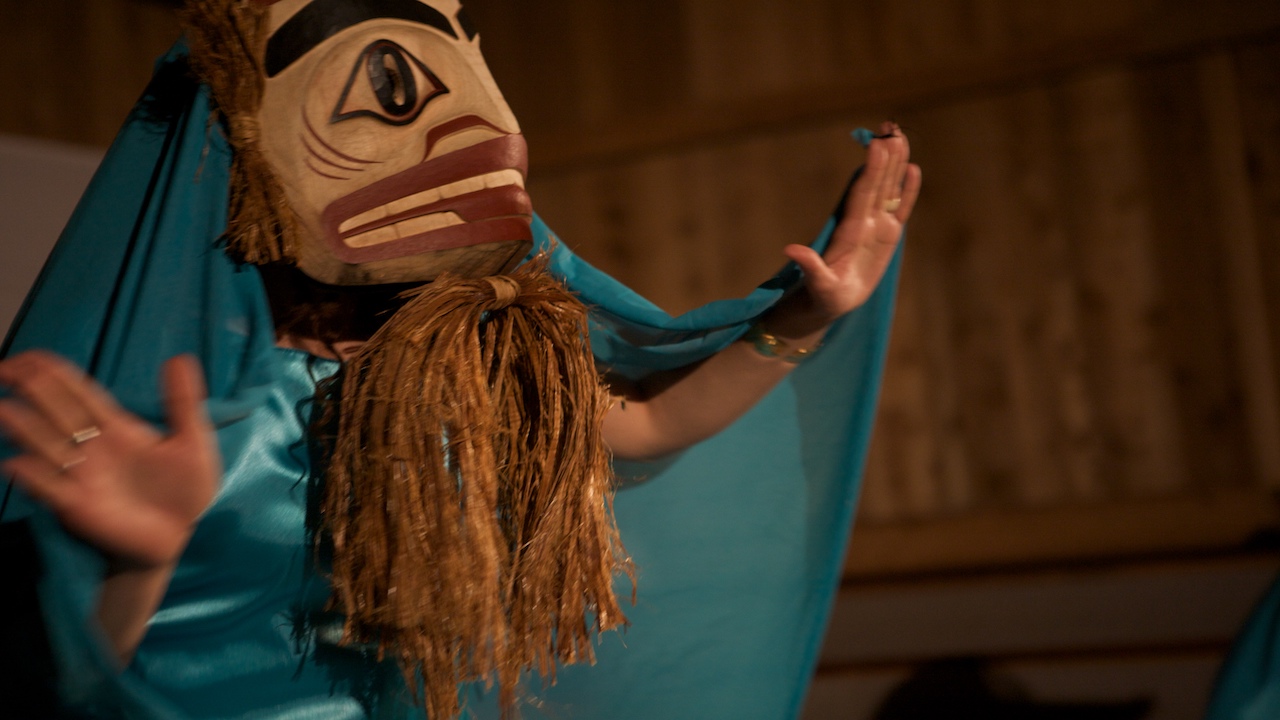 When I recited this line in my ancestral X̱aad Kíl—one of three dialects of the Haida language—I was in the role of a supernatural grebe, a type of aquatic bird, in the play Siinxii’gangu (“Sounding Gambling Sticks.”) At the time, I was pregnant with my now 14-year-old daughter Nora-jane and partway through my journey learning the Haida language. Based on a story about a man who gambles his village away, Siinxii’gangu was performed entirely in X̱aad Kil in Haida Gwaii, a mist-covered archipelago off the coast of British Columbia and the territory of the Haida Nation.

The play brought together a cast of nearly 20 Haida community members of all ages, who, like me, were learning X̱aad Kíl. The experience represented a pivotal moment in our collective language learning journey: It was the first time in recent memory that the Haida language was spoken by multiple generations in public dialogue. We worked with Elder fluent speakers, including Sk’adada ‘Léeyga, the late Stephen Brown, to learn our lines. Known by his students as Tsinii (grandfather) Stephen, he was honoured as a language champion by the First Peoples Cultural Council for his work in language revitalization in 2011, a year before he passed away.

Colonial practices, like the Indian Act and the spread of residential schools, restricted the use of Indigenous languages across the country, using violent and sometimes fatal means of enforcement. That legacy has created multiple harms, making it difficult for these languages to be passed down to the next generation. However, there have been on-going efforts to revitalize Indigenous languages in communities and in classrooms.

There are very few Elders still with us who speak Haida as a first language and are able to teach a growing community of learners. But there are many Haida organizations committed to strengthening our language, like the Skidegate Haida Immersion Program and X̱aad Kil Née Haida Lanugage Office. I’m one of many doing this work as a Haida language teacher and curriculum developer in the Haida Gwaii school system. We are part of a larger narrative of Indigenous language revitalization that faces similar journeys to make right a trail of destruction left by the legacy of forced assimilation and language removal.

I began learning X̱aad Kil in earnest while expecting my oldest daughter, Haana. Her father, Jaalen, and I committed to learn the language and provide our children with knowledge that was largely inaccessible and seemingly unattainable for us when we were growing up.

The legacy of residential schools meant our parents’ generation spoke only English for the most part. My father, who grew up with his grandparents until the age of six, understood and spoke X̱aad Kíl until he was sent to a federal Indian Day school in Old Massett, B.C., where he quickly lost his language from the school’s violent enforcement of English.

My father passed away last fall. His Haida name was Ḵwíiyaans and he was 71 years old. He encouraged me with every step of my education, in both academia and while learning X̱aad Kil. His love and pride seemed to be an unending well.

In 2019, a class-action lawsuit was settled against the Canadian government for the harms done to former students of Day schools. Former students, like my father, were to fill an application form that required recounting the abuse they suffered in order to claim a settlement.

Upon his passing, he left behind his unfinished application that was far too painful for him to complete. When my mother and I revisited his paperwork together, I was both enraged and saddened. The application is a dehumanizing and retraumatizing process. Above all, I was furious at a system that ripped culture, language and love from generations of Indigenous children.

My father, however, rallied back with a love so large that the force of colonialism could not shake it, even in the moments when he tried speaking certain words in X̱aad Kíl and they stuck in his throat. It is in his memory I continue this difficult work teaching, learning and advocating for X̱aad Kil. I hold on to treasured memories of students naturally shifting from understanding to speaking the language.

The play Siinxii’gangu had five performances in the summer of 2008. My character was a supernatural helper to the main character Siinxii’gangu who brought him to visit the Great Chief under the Sea. Siinxii’gangu had gotten himself in great trouble by gambling away his father’s village, and needed to redeem himself by learning how to conduct a cleansing ceremony before receiving the help he needed.

The story reminds us of one of our fundamental Haida principles of tll yahdah, which means “to make right.” Even when great harm is done, there is always a way to set things right in the world again.

It is our powerful ancestors who help us, just as my character advised Siinxii’gangu in the play 15 years ago. It is the teachings and love left by people like my father, Ḵwiiyaans, and my late teacher Sk’adada ‘Léeyga (Stephen Brown) that will bring us through lessons on how to tll yahdah the ongoing colonial legacies.

I now have three children, Nora-jane, 19-year-old Haana and 10-year-old Wiijaa. All of my children have heard X̱aad Kil in the womb, in their formative years, and each and every day that I speak it to them. I am honoured to be on this language learning path, one that ripples through every aspect of my life: as a mother, sister, daughter, aunty and teacher.

Correction: An earlier version of this story misidentified Tiffany Amber Vanderhoop in a photo caption. The caption has been updated.