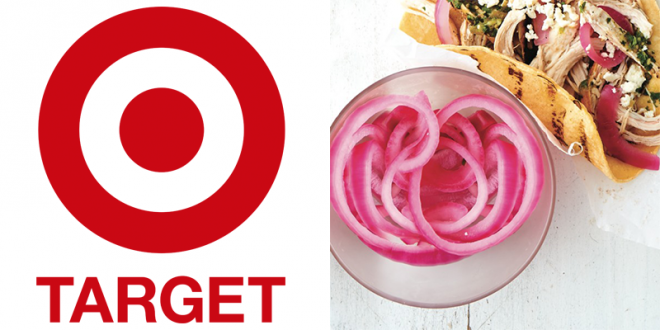 The news: Elbows out, everyone: Target Canada’s liquidation sales begin today. Deep discounts were inevitable after the retail giant abruptly announced it would be pulling out of Canada back in mid-January. (The closure will result in 17,600 employee layoffs across the country.) According to a Target spokeswoman, prices could be slashed by up to 30 per cent, and the Canadian Press reported Thursday morning that kitchenware, electronics, and diapers were reduced by 10 per cent at one Toronto location. The company plans to shutter all 133 of its Canadian stores by May, and lineups at many Targets snaked out the door this morning, so fill your cart while you can.

The dish: Briny red onions that can be pickled in a pinch (and artfully arranged to look kind of like the Target logo). With just a splash of white vinegar, and a few pinches of sugar, salt and garlic, you can whip together an easy burger topper—or a briny snack that’ll keep while you idle forever in the checkout line. Get the recipe here.