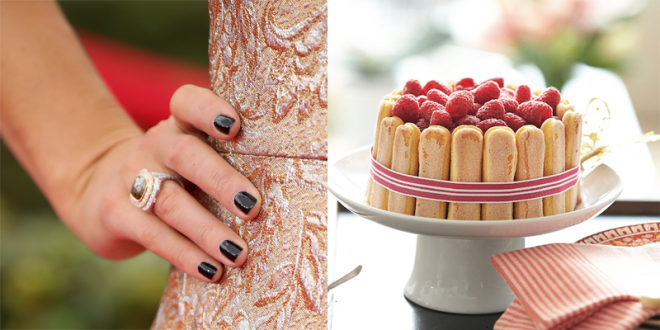 The news: The Screen Actors Guild Awards (a.k.a.: the pre-Oscar Oscars) took place in Los Angeles on Sunday night, and the E! Network was prepped for its customary rabid red-carpet coverage with cameras (including its tiny “mani cam”) in tow. Host Maria Menounos’ usual gown-and-bling inspections hit a few snags, however, when several big-name actresses outright refused to have their cuticles analyzed by the starstruck masses. Nominated for her unglamorous turn in Cake, Jennifer Aniston rebuffed Menounos’ request with a polite but firm “no thank you,” while Julianne Moore just wasn’t having any of it, saying, “No, I’m not doing that.” Other starlets employed more creative mani cam–avoidance measures, such as shoving Sofia Vergara between themselves and the finger-razzi (Reese Witherspoon), or complaining of dry skin, like Orphan Black‘s Tatiana Maslany.

The dish: An impenetrable wall of ladyfingers. Fixed with a fetching ribbon, our Raspberry charlotte is an elegant dessert that brings sweetness and style to your dessert table. (Bonus: you’re allowed to take pictures of it.) Get the recipe here.