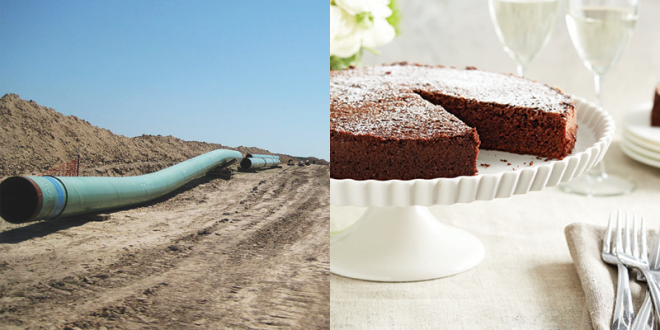 The news: Surprising almost no one, Barack Obama used his presidential powers to put the kibosh on the controversial cross-border Keystone XL pipeline on Tuesday. To bring you up to speed, the project would span about 2,700 kilometres, originating in Hardisty, Alberta and joining up with the existing Keystone line in Port Arthur, Texas. (It’s probably one of the oilier acts of diplomacy in Canada’s history.) The bill, which was first approved by the country’s Republican-run Congress, was delivered to president today. Within hours, he was like, “Nah,” and sent it back unsigned. Obama’s veto is definitely a setback for Big Oil — and definitely won’t make Stephen Harper very happy — but it won’t kill the build altogether. The president will get to wield his executive authority one more time during a second, separate regulatory vote later this year.

The dish: A rich, moist chocolate cake made with olive oil, which is every foodie’s idea of liquid gold. Get the recipe here.