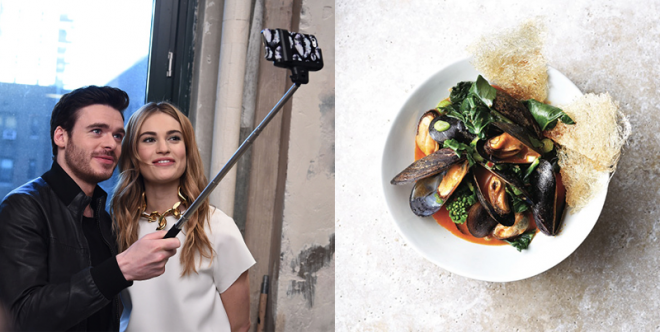 The news: Disney’s Cinderella remake hits theatres today, with a new-ish spin on the 1950 classic. Cinderella 2.0 is played by Lily James (of Downton Abbey fame), the formidable Cate Blanchett takes on the role of Evil Stepmother (now with 100 per cent more leopard print and a red dye-job), and the usually sinister Helena Bonham Carter flips the script as the twinkly-eyed Fairy Godmother. Game of Thrones‘ Richard Madden also appears as the requisite able-jawed Prince. There’s been much media skepticism as to whether Cinderella the Second’s obvious damzel motif stands up in a post-modern, post-Frozen era, but director Kenneth Branagh insists the fairy-tale remake sends a positive message to young girls: “Cinderella’s not a pushover,” he said. “She sticks up for herself.”

The dish: Glass noodles matched with XO Sauce–smothered mussels — because dinner is a wish your stomach makes. Get the recipe here.