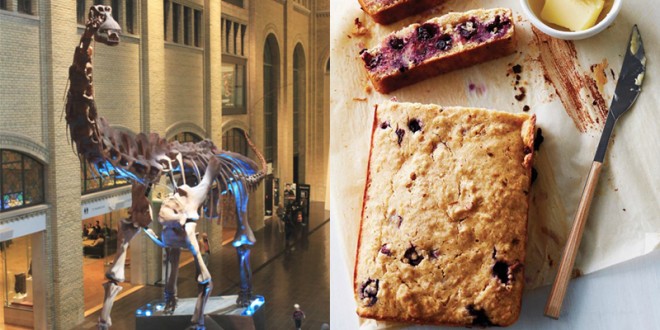 The news: Twitter isn’t always a bastion of high culture, but when it is, it goes all out. Welcome, history buffs, to #MuseumWeek 2015: seven whole days dedicated to appreciating the resting places of some of the world’s coolest historical paraphernalia. Until March 29, the artifact-obsessed are encouraged to flood Twitter with photos of their most-cherished museum souvenirs (#souvenirsMW) and candid snaps of their favourite displays (#poseMW). Museums themselves will also lift the curtain on their behind-the-scenes activities using #secretsMW. Of the 2,000-plus sites participating worldwide, 130 are located in Canada. So if you ever wanted to snag a selfie with one of the Royal Ontario Museum’s Jurassic leftovers, now’s your chance.

The dish: A pound cake that will stand the test of time. This one is filled with plenty of ancient grains — namely, amaranth, buckwheat and millet. Oh, and blueberries. Get the recipe here.