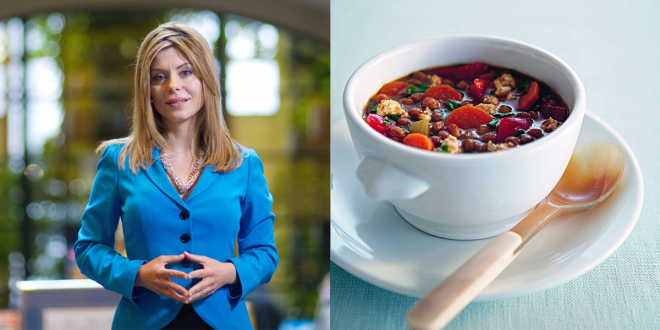 The news: Taking a page out of John Baird‘s playbook, former Conservative MP Eve Adams announced her split from Stephen Harper’s party Monday morning. But instead of ditching Parliament altogether, Adams has defected to the opposition, citing concerns over the Conservatives’ soon-to-be-enacted income-splitting policy. (Political primer: Effective this year, taxpayers will be allowed to transfer part of their income to their spouse in order to pay a lower tax rate.) “I strongly believe that it is time for a leader who can steer Canada in a more positive, productive direction,” Adams said in a prepared statement. “I believe that leader is Justin Trudeau.” Floor-crossing, surprise resignations—Election 2015 is getting juicy.

The dish: A split-pea soup, slowly simmered just like Adams’ political intentions. This warm, veggie-heavy comfort food will feel as good to Adams as her newly relieved moral compass. Get the recipe here.