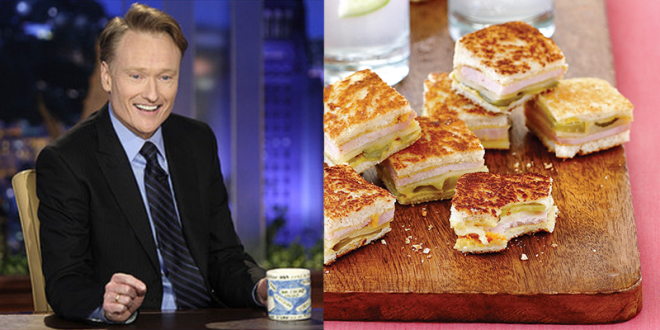 The news: Conan O’Brien has taken his show on the road — all the way to Cuba, in fact. The rust-haired comedian spent Presidents’ Day weekend filming on location in Havana for an episode slated to air on March 4 on TBS. This marks the first time an American talk show has brought its crew to Cuba since Jack Parr’s 1959 Tonight Show interview with Fidel Castro. O’Brien is also the first late-nighter to capitalize on the U.S.’s softened stance on Cuba since Barack Obama announced his intent to lift many trade and travel restrictions in a national address last December. Show producers have promised viewers “a rare glimpse into Cuban daily life.” We hope Conan packed a robust SPF.

The dish: The Cubano, a bite-sized meat-and-cheese sandwich born in Cuba and perfected in America. Good things happen when the two nations get together. Get the recipe here.