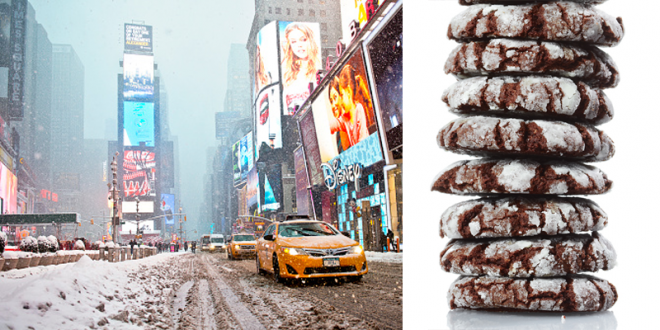 The news: While you were sleeping, an “historic” snow system—nicknamed “Juno”—meandered its way up the northeastern seaboard, leaving cancelled flights, strong winds, and a trending hashtag (#Blizzardof2015) in its wake. Schools and businesses have shuttered from New York City to the Maritimes in preparation for what has been touted as a “crippling” nor’easter. So far, big Juno hasn’t lived up to the hype—at least as far as NYC is concerned—but the widespread storm panic has nonetheless provided cheeky social-media users with yet another reason to inundate Twitter with hilarious winter memes. Nova Scotians still aren’t in the clear, though, with Environment Canada predicting a snow dump of 15 to 30 centimetres for the region by Tuesday afternoon. Out of respect, we’ll hold off on our Day After Tomorrow jokes until Wednesday.

The dish: Cocoa-almond cookies with a light dusting of “snow.” Our chocolate snow mountains provide the perfect opportunity for storm shut-ins to bake and stress-eat. And they’re flourless, for those who could use a little less white stuff in their lives right about now. Get the recipe here.