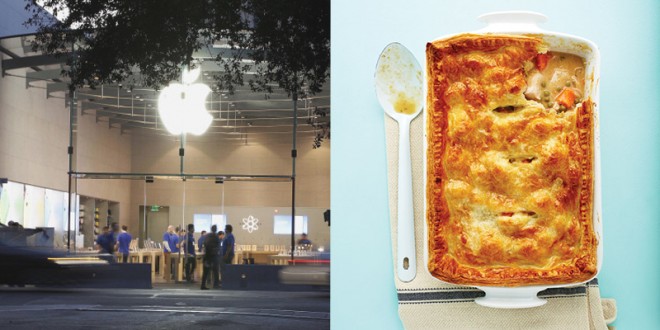 The news: Now that it’s cornered the market on music, mobile phones and commercials that leave you dehydrated from crying, Apple is expanding into the automotive business. The company is apparently working on an electric car, with production slated to start as early as 2020. The project will provide formidable competition for General Motors and Tesla, both of which are developing electric models priced under $40,000 for a 2017 release. So far, Apple reps have remained tight-lipped about the specs on its new wheels, but we’ll bet you an iTunes gift card it’ll have a pretty tricked-out sound system.

The dish: An inviting, fruity spin on the classic turkey pot pie. As the late Steve Jobs once said, “Creativity is just connecting things.” In this case, it’s apples, puff pastry and meat. Get the recipe here.