It’s been years since I separated from my daughter’s father. In that time, I’ve dated, and had boyfriends — but I didn't like any of them enough to have them sleep over. 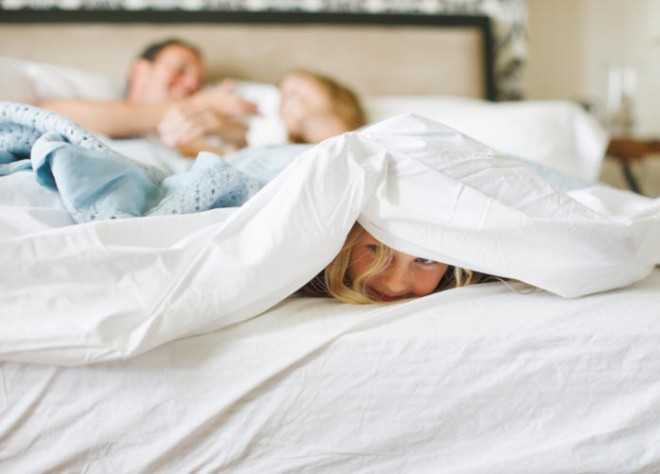 It’s been years since I separated from my daughter’s father. In that time, I’ve dated, and had boyfriends — but I didn’t like any of them enough to have them sleep over.

For four years now, my daughter has slept with me in my bed. This is not because I really believe in attachment parenting, but because my bed is big. Also, I like sleeping with her as much as she likes sleeping with me.

But for almost six months now, I’ve been dating a man who I really, really, really like. It’s the first time that I’ve wanted a guy to sleep over regularly. This means that my daughter has to sleep in her own room. She doesn’t like this.

Now, let me just say that her room is fantastic. She has a Pottery Barn bed with great sheets, and a million stuffed animals to keep her company. But recently she’s been saying things to me like, “Does he have to sleep over again?” or “Do you like him more than me?” And this breaks my heart.

Of course, I tell her that I’ll never love anyone as much as I love her. But I do want to live my life and I feel that I have finally found a man I see a future with.

I’m not sure how blended families do this. I sort of blame myself for allowing my daughter to sleep in my bed for so many years — but then again, I also don’t because I’ve wanted to sleep with her as much as she wants to sleep with me.

But now with my new guy, I also really want to sleep with him. It’s easier on the weekends, when we can sleep at his house. He has two girls and for my daughter it’s more like a sleepover, as opposed to him sleeping here and her becoming competitive with him over sleeping in my bed. I feel awful that I’ve booted her out of my bed. I feel awful when I tell my boyfriend that he can’t sleep over some nights because I want to sleep with my daughter. So, basically, I’m feeling awful about everything.

Now, I know a lot of children see therapists these days when their parents get divorced. I’m not sending my daughter to a therapist, because I don’t think she needs it. I know her better than anyone else, and we have a very close relationship where we talk about everything.

If you’re wondering what it feels like for a child of a divorced parent who has found someone they have fallen in love with, I’m going to tell you exactly what goes on in a child’s head. Today I’m interviewing my daughter, Rowan, age seven. Who better to interview than someone who is actually going through the experience of having a new adult in her life, one who has interrupted her nightly routine and is feeling competitive for my attention?

1. I asked her how she feels now that I have a new man in my life that I love. “Good,” she said. “Because, um, it makes me feel like I have a family.”

2. I ask what she doesn’t like about having him in our lives. “That he sleeps over and there’s not enough room in the bed for me.”

4. I ask if she’d rather sleep at his place than having him sleep at our place. “Yes, because he has two daughters, which means we’ll be triplets.” (Um, okay!)

5. Does she have any advice for children like her whose mothers have started to seriously date a man and have sleepovers? Her answer: “Did you know that a girl in my class has the same name as Daddy and they are divorced too? Which means we have a lot in common.”

7. I ask her if she is “happy overall.” “Let me think about that. Yes, but I don’t want you to love him more than me.” (I tell her again that will never happen.)

8. I ask how I can make her feel better when he does sleep over. “If I can sleep in your room too. Like even on a sleeping bag on the floor.”

9. I explain the word “compromise” and ask how we can compromise on the number of days he sleeps over. “Once a week would be good,” she says. “But no times would be better.” (Okay, the compromise thing didn’t work.)

So, my friends, I’m giving you her answers straight up. Obviously, this is something that is really bothering me, and I’ll have to figure it out. But if you want to know what a child is thinking when you bring a new man home, that’s what they’re thinking.

So, I need help! Suggestions for blending the love of your life (your child/children) with the potential for a long-term future with someone you also love (an adult?) would be greatly appreciated. Thoughts please!