In today’s news: Canadian wins Iron Chef; the latest on the MS liberation therapy debate; why celebs swear by transcendental meditation; Lady Gaga loses it (and we’re not talking about her mind); and the 30 best passive-aggressive fridge notes. 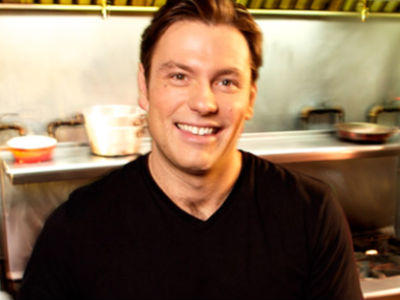 Sometimes luck comes in the form of a clawed crustacean. Such was the case for Quebec chef Chuck Hughes, who took home the title of Iron Chef after the surprise ingredient in the show’s final challenge turned out to be good old Canadian lobster. Hughes is such a fan of the east coast delicacy that he has one tattooed on his arm. The Montreal restaurant owner whipped up a dish of lobster poutine to become the youngest Canadian to win the grueling cooking contest.

In the past two years, multiple sclerosis and its treatment have been a hotly debated topic in the Canadian and international medical community. A new treatment known as CCSVI or liberation therapy which opens the neck veins of MS sufferers has been hailed as both a salvation and an unproven crackpot theory. Now, advocates on both sides of the fray are digging in their heels, and Maclean’s has an excellent rundown on the latest claims and arguments of both camps.

Looking for a little enlightenment? So are Russell Brand, David Lynch, Susan Sarandon and Moby, and they’re all finding it through transcendental meditation. The mind-calming practice involves repeating a mantra for about 20 minutes, twice a day. It was popular in the 1960s, but then fell from the public eye. Now, it seems to be experiencing a resurgence: one major transcendental meditation centre has seen its membership triple in the past three years, and a new wave of celebrities is endorsing the calming activity.

It seems that Lady Gaga’s peroxide-soaked exploits may finally be catching up to her. The 24-year-old shock pop star has been dying her naturally dark locks platinum blond for years, and now admits that she has to “get a chemical haircut because my blonde hair is falling out.” Is it time for Gaga to tone it down and go natural? Judging by this photo of pre-peroxide Gaga, the diva actually makes a pretty cute brunette.

If you’ve ever worked in an office, you know the daily war that can take place around the office refrigerator in the form of passive aggressive notes. Honestly, if you’re going to eat my cheese sticks and drink my coffee creamer, you’re going to get a snotty note about it. Thankfully, the people of Buzzfeed have taken the time to assemble 30 of the best ever passive-aggressive fridge notes. Now stay away from my salad dressing.