An apple that won't go brown; Torontonians are the saddest; how women can beat stereotyping; stripper shortage in Toronto; and Anne Hathaway and James Franco will host this year's Academy Awards. 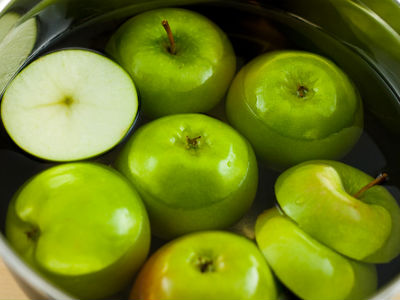 Sliced apples are delicious, but we all know how much less appealing they become once they’ve had a little while to go all brown and yucky. Now, a British Columbia biotech firm has genetically engineered an apple that won’t brown soon after it’s sliced. The question is, do we want to eat it? The team making the apple says it will benefit consumers, but critics say its biggest beneficiaries will be sellers and producers, who will be able to sell a product that is older than it looks.  Those who could potentially sell the super apple say that GMO is a bad word in the food industry, and question whether consumers will purchase a product that has been scientifically engineered for primarily cosmetic purposes. So, what do you think? Are you excited are terrified by science’s latest improvement on the fruit basket?

Are you from Toronto? Are you sad? Survey says…yes! Well, more or less. A new study titledDoes Money Matter?: Determining the Happiness of Canadians has found that Torontonians are the least happy people in Canada, while the happiest are in Quebec and P.E.I. For those of you in the Big Smoke, fret not. Though you’re the most miserable bunch in Canada, you still live in one of the happiest countries in the world: we rank consistently among the top five happiest countries on the planet, and are the happiest members of the G7.

A new study has found that female physics students can improve their test scores by doing two short writing exercises that have nothing to do with physics.  The results revealed that when women wrote about the things that mattered to them – relationships with family and friends or creativity, for example – their marks jumped. Scientists postulate this is because of the “Stereotype Threat,” which causes victims of negative stereotypes – women and ethnic minorities are currently being studied – to automatically focus on those negative stereotypes when in a performance situation. The study also proves that this negative effect can be countered by something as simple as focusing on the things you love. Hooray for science!

Should Canada allow more foreign strippers to immigrate here? The owners of nightclubs in the Toronto area say yes. They’re lobbying Ottawa to relent on what they say is a campaign to keep strippers from immigrating to Canada. The owners say the city’s supply of exotic dancers is dwindling because the Canadian government has severely reduced the number of visas given to foreign dancers. Owners claim they are being forced to recruit more Canadian students, and some clubs are even offering to pay full university tuition in addition to wages.

Young Hollywood super-hotties Anne Hathaway and James Franco will host this year’s Academy Awards, it was announced yesterday. This is the second year a pair of stars will fill the role – last year Alec Baldwin and Steve Martin played host to the film industry’s biggest night. It’s unusual for such young stars to be named for the job, which has traditionally gone to veteran comedians like Billy Crystal or David Letterman – let’s hope the stunningly attractive pair is up to the task.