They may not get the paycheques or the prestige of male jocks in the NHL and the NBA, but don’t underestimate our elite female athletes. Here, we get up close with six of our fiercest contenders vying for a spot on the podium in Beijing. 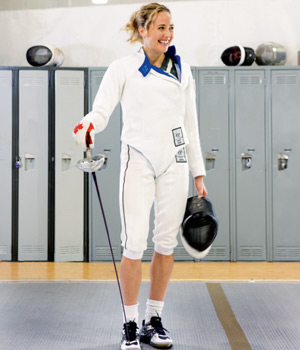 “When I put on my mask, I have the freedom to be nasty, because that’s what fencing requires. My compassion has to be pushed to the side when I’m competing.”

Follow Sherraine’s journey to the 2008 Olympics in her blog, Road To Beijing.

“When the target comes out, it comes out at 65 miles an hour, and it just feels so good to hear it smash when you hit it. There’s this feeling that I’m at one with my gun and the target, and it just all flows together, and that flow is addictive.”

“You know how you can’t describe what love is? It’s the same with the Olympics. There’s a magic to it. I always wanted to be one of those [Olympic athletes] who give it everything and finish in that magical moment when you win and you can finally say,’I made it.'”

“I used to cry when I started to do dives from the 10-metre platform, because I was scared I was going to hurt myself. I’m not afraid of heights, but there’s always a little nervousness when you step on that platform. But you live with it. And there’s nothing like the feeling of a ripped dive.”

“Just because a sport is dominated by women doesn’t make it weak. I train 30-plus hours a week and I can squat about 180 pounds. People say rhythmic gymnastics is pretty but not really a sport. I’d like to see them try it.”

“I call hurdlers the crazy ladies of track and field. You put up 10 barriers and ask someone to go at them full speed. You have to be insane to sign up for something like that, right?”

After a fall ended her gold-medal dreams at the Athens Olympics, Felicien spent four years training for redemption in Beijing. Then, this February, she was sidelined by an injury. Still unsure about whether she’ll be able to compete, Felicien tells us how she perseveres.

“I have been to the last two Olympics and it feels so good joining the rest of the world in one city and representing such a wonderful and respected nation. I want to give myself a chance to be on that stage again. When I injured my foot, it was so subtle no one thought it would linger. It is certainly trying and sobering to know it may cost me a trip to Beijing.

“I’m doing everything in my power to be a contender [at the Olympics]. I am cross-training, and doing rehab every day with that goal in mind. I won’t quit until the final hour. It’s too early to give up on my dream.

“If I can’t compete in Beijing, I will set my sights on the Olympics in London in 2012. I am still young for my sport, and the fire and passion for it is still within me. I am not done winning medals yet. Injury and setbacks are part of what I do, and if I can’t deal with them, then I need to pick another profession.

“I love track and field: Yes, it’s granted me some lows, but it’s also blessed me with some of the highest highs. It’s a trade-off I am willing to accept, because in this hurdler’s eyes, it’s worth it.

“As an Olympic athlete, I live for an event that comes once every four years, but there are other things to strive for. In the face of what happened in Athens, it would be satisfying to show up in Beijing and win.

“However, in the last four years I have learned not to define myself by one event, no matter how big. My self-worth is not dependent on an event that lasts less than 13 seconds. Hurdling is what I do; it’s not what defines me. And that’s why, in this challenging time, I know I will emerge better for [having struggled] and thrive once again.”