Calgary Sex Worker Lula Blue Needed A Community. So She Built One

Before Thrive Hive, the sex work business in Calgary felt cut-throat. Now, workers have a way to share experiences and keep each other safe. 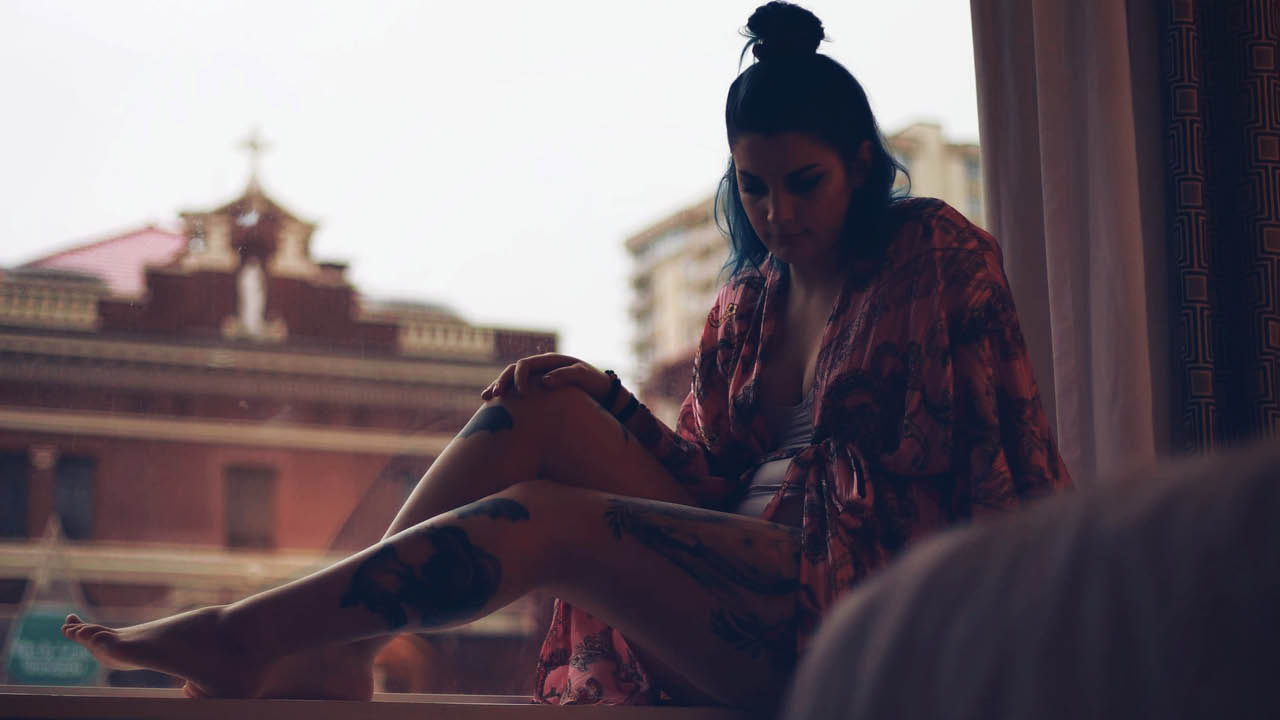 In the years before Lula Blue started Thrive Hive, the sex work business in Calgary often felt cut-throat. Professional jealousy was common, often arising when workers saw colleagues attracting more clients, or earning higher ratings on review sites. Such divisions were often stoked by the agencies they worked, like the one Lula signed on with when she started selling sex in 2016.

“I was 21,” she says, “and I didn’t know anything about the industry.” Like many newcomers, she chose a recognized escort agency she saw advertised on Craigslist. In Calgary, individuals and businesses must obtain a municipal licence before offering “adult-oriented services,” and the city employee who sold Lula hers told her “they were reputable and do everything by the book,” Lula says. “I had this expectation that this was going to be great.” It wasn’t great. Her first few years in the business were lonely and anxious.

Today, Calgary’s sex workers have a community. At the bimonthly meeting of Thrive Hive, the support group Lula started in 2019, workers share struggles from both their professional and personal lives. “The meetings are about getting together to support each other and talk about the hardships of working in such an isolating and stigmatized industry,” Lula sayes. “Or a place to share happy news with people who understand the ups and downs of this business.”

The first agency that Lula worked for kept her isolated, preventing her from associating with her colleagues. “Agencies try to separate you,” Lula said. “They don’t want you talking. They tell you the other ladies aren’t trustworthy.” The only other person she spoke to in her first few months was the agency owner, and only over the phone.

The only time Lula met fellow escorts was on calls where two workers had been requested. For a few minutes before and after such gigs, she and her partner sometimes had a few minutes to chat or exchange phone numbers. It was through talking with other workers that Lula realized that she was being manipulated and abused by her agency: If she refused a booking, for example, her employer questioned her work ethic. She also endured sexual harassment from the drivers that took her to clients.

Worst of all, Lula learned the agency was not screening her clients as promised. One of her clients had been blacklisted by the agency three times for scamming workers out of payment. “They were sending all the new girls there because the new girls didn’t know any better,” Lula said. “Now imagine if that client had been blacklisted for violence instead of money scamming. Pretty scary situation.”

Lula left the agency, and signed on with a different outfit. But the second agency didn’t screen clients much better, and many late-night clients were active drug users. “For someone trying to stay sober, that was really difficult for me,” says Lula. The anxiety intensified her decade-long struggle with alcoholism, and after seeking treatment and getting sober in 2018, she realized that what she needed was to connect with other workers.

“I realized how isolation was making me really sick,” she says. “That was a huge part of my battle with addiction. Coming out of that and building community and having support from other people saved my life.”

The first community Lula found was on Twitter, one of the only social media platforms where sex workers can openly post uncensored content. Joining the vibrant sex worker community there connected Lula to workers around the world. “I started realizing I could go independent and do this on my own,” she says. Lula left her agency in 2018 and rebranded herself as a “professional girlfriend,” a marketing term for a full-service sex worker. “I get paid to go on dates,” Lula says. “Or for intimacy and companionship.” 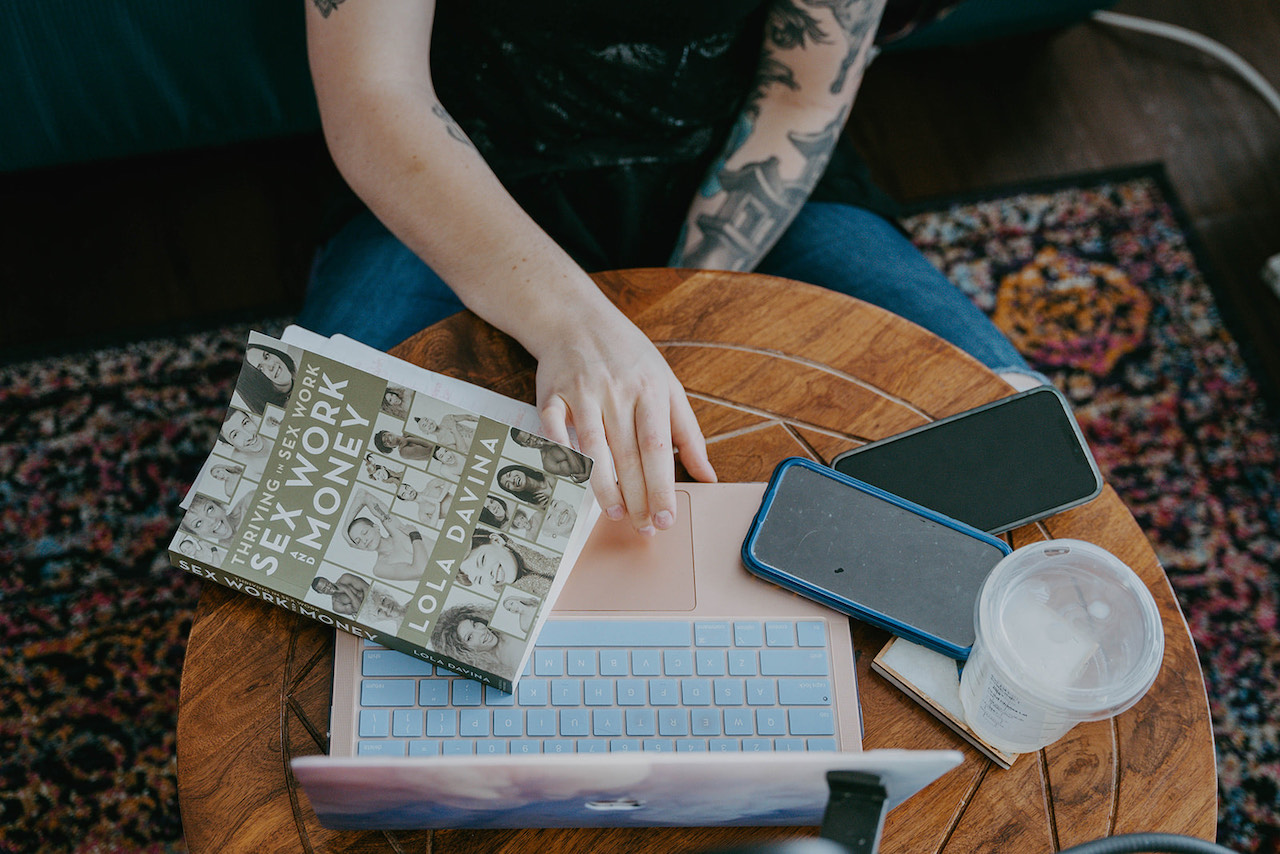 A year later, she started reading Thriving in Sex Work: Heartfelt Advice for Staying Sane in the Sex Industry, by famed author and former sex worker Lola Davina. Much of the 2017 book reminded Lula of what she’d learned in her addiction recovery support groups and therapy sessions. The book offers exercises for conquering fear, shame, anxiety and low self esteem, for example, and recommends meditation and mindfulness practice. Using Davina’s book as a guide, Lula decided to start a sex worker support group in Calgary. “I threw out a note on Twitter,” Lula says. “‘Would anyone be interested?’” The response was positive. Davina herself commented on the post and offered to help out in whatever way she could. “I had a fan girl moment,” Lula said.

Lula christened the group Thrive Hive, and started holding bimonthly meetings in November 2019. Word spread quickly and before long, workers from all over Alberta started showing up to meetings, some making the three-hour drive south from Edmonton to attend. Soon, members realized they were better off as allies than rivals. Now, many share clients and provide references for each other, as well as warning each other about bad clients and agencies when necessary.

“The shift in our perception of each other is very healthy. Lula has been pivotal in that,” says Hive member Keevah Simone.

At first, Lula restricted membership to active, full-service sex workers like herself. “I wanted to create something that I didn’t have access to and was missing in my community,” she said. But she quickly decided the group should be more inclusive and started to invite retired workers. “Just because you leave the industry doesn’t mean you’re not still stigmatized for the rest of your life in some way,” she says. “You still need that sort of support.”

Lula then expanded Hive’s reach even further, reaching out to strippers, pro-dommes, online content creators and cam girls. She welcomed male and gender-fluid workers, too. Thrive members realized that no matter what corner of the industry they occupied, their issues were often the same.

Now, Thrive Hive is one part of a bustling community, in which other Calgary workers organize everything from clothing swaps to Christmas toy drives to income tax workshops. They’ve gathered for barbecues and book clubs, social events that allows workers to connect and have the sort of unguarded conversations they often cannot have with their civilian friends and family.

“We’re already isolated,” Lula says. “We’re already cast aside by the rest of society. We might as well get along and try to build each other up.”