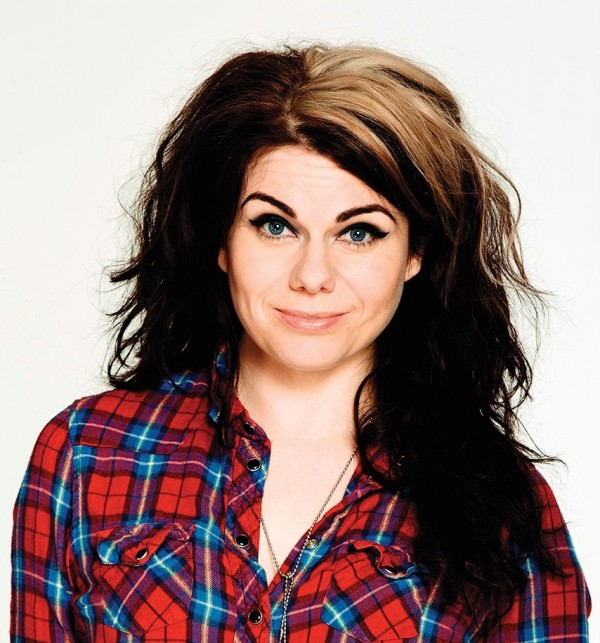 There are five rules of feminism, according to Caitlin Moran. 1) Women are equal to men. 2) Don’t be a dick. 3) That’s all. True, that’s only three. The others you can make up as you like. This maxim is, like everything she writes, both truthful and funny. If you grow up poor in a family of eight children in Wolverhampton, U.K., and possess, as she says, a face that is “half potato, half thumb,” you’d better be amusing. (Don’t listen to what she says about her face; it is lovely and impish.) The author of the bestselling memoir/credo How to Be a Woman and the novel How to Build a Girl, Moran, 41, is back with Moranifesto, a collection of her award-winning columns from the Times of London. She spoke to Chatelaine from her living room in the London house she shares with her husband, two teenage daughters and a couple of cats she doesn’t like very much.

She looked at me like I was a lunatic. I don’t think there is any other expression at the moment. Except for the sweet face they do just before they ask you for money.

It’s tricky raising girls today. In some ways, it feels like they’re on top of the world, and in others, it seems like they’re dealing with the same old torment. The shift between being a child and being a woman is one of the hardest things. No one would apply for that job! Look at the statistics on rising anxiety, eating disorders, self-harm, suicide, depression. This is a very ill generation because we don’t make being an adult woman a fun job. Half of my work is talking about this bullshit, and the other half — because I’m a humorist — is trying to make being a woman fun. To say, “Look, this is how it can be incredible.” This is terra incognita! We get to invent what a woman can be. We get to decide how we want to live, what we look like, how we dream, how we want to work. 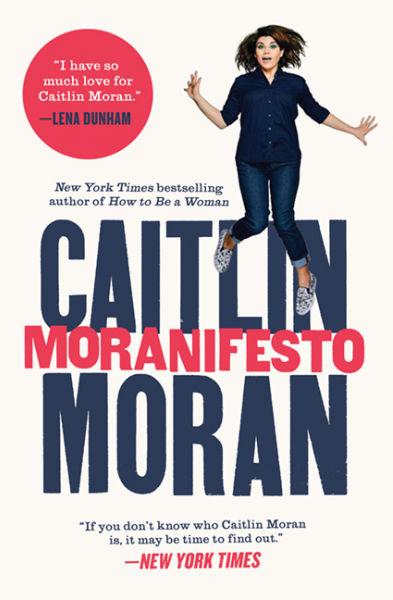 In 2013, you led a day of “Twitter silence” to protest online misogyny. You wrote that social media is like a zoo that has been set on fire. How do you feel about it now?

We’ll have to invent a new space. It would be great if it was invented by women, for once, from the ground up. And it would be like sitting around a dinner party talking, rather than someone coming through the door and firing off one-liners.

There’s a line in Moranifesto about how, as you get older, you lose skin elasticity, but you also lose the number of f–ks you have to give. So what number of f–ks are you at right now?

I would say I’m in the non-f–k zone. When you come from a working-class background, or you’re a minority or a woman or anyone else who’s under-represented, and you’ve had a bit of success, you’re scared that you’ll get fired or found out. And then you realize that everyone feels that way. Chances are, as long as you work hard and you’re nice to everyone, you’re going to be fine.

British society seems kinder to women as they get older than North American society. Do you think that’s true?

We’re all Emma Thompson throwing our shoes into the crowd and saying, “I can’t wear these things! They hurt too much.” We just can’t be arsed in the end to go through that kind of pain. We don’t buy those shoes, we don’t go for those nails. It just annoys us. We basically ask only for rudimentary hygiene in a woman. As long as I can’t smell you from the other side of the room, you’re socially acceptable. I always feel like an ugly teenage boy when I’m walking around in America.

You talk about how girls should have a life full of heroes the way they have a closet full of shoes and belts. Who are those heroes for you?

I was given so many excellent pieces of advice by fictional girls. Like in Anne of Green Gables, where Anne says, “Tomorrow is a new day with no mistakes in it.” That’s such a lovely thing to know if you’re a teenage girl, and you think the world is about to end because of something you said or did or wore. To think that if you do something brilliant tomorrow, everyone will forget about the bad thing you did today. I find that enormously comforting.

And now women give their daughters your books.

My main audience is mums bringing their daughters to book signings and saying, “Look, she did it. She managed to be happy. You could be happy too.” It’s a beautiful responsibility to have. I will try to make your girls feel better. That’s one of the biggest jobs on earth right now, to make girls feel better.