The British columnist took a moment to chat with us while she preps for her live debate with Hanna Rosin, author of the controversial book, The End of Men. 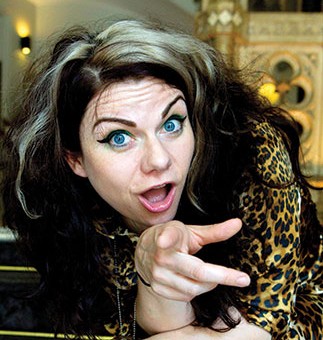 Fourteen months after the release of Hanna Rosin’s controversial book, The End of Men, Caitlin Moran and Camille Paglia join forces to challenge her thesis. We chatted with Caitlin, author of How to Be a Woman, about her plan of attack — and what a world without men might look like.

A: 1) They smell nice. 2) Paul McCartney is a man and you gotta keep all the Beatles you got. 3) Kinda lonely without them. You know? I cry about polar bears going extinct. Losing all men ever would be even sadder than watching that polar bear that was swimming exhausted in the sea because his iceberg had melted. Imagine that it’s not a polar bear, but Norm from Cheers. Swimming. Swimming and swimming, but finally dying, from heart failure, and seagulls pecking his eyes out. Norm! NORM! NOOOOOOOO!

Q: What would you replace men with?

A: I’d pathetically try to make a man, like in Weird Science, out of things I had. But instead of that bit where they make Kelly LeBrock’s tits huge, I’d give him a bit of a belly. I’d make it bigger and bigger. I like a man with the build of a young Winnie-the-Pooh. Grrrr. That makes me rumbly in my tumbly (by which I mean vagina).

Q: What are your feelings about Canada’s most infamous mayor, Rob Ford?

A: He’s the piss-head mayor, yeah? But in a bad way? Having Googled his career, I can confirm that I will leave the way clear for other women to win his hand in matrimony. Help yourselves, ladies. I shall not get in your way.

Q: How would you console Torontonians if Rob Ford won another election?

A: Probably in the worst possible way, by telling you that, in the next election for London mayor, we’ve got Eddie Izzard running as well as a transvestite socialist comedian and a charity marathon runner who’s impossibly f**king hot, sexy and righteous with a cracking pair of legs in Louboutins, to boot. Maybe your sorrow, anger and jealousy would inspire you to rise up and overthrow Rob Ford, and make him go and work as an extra at the Anne of Green Gables Experience, which is a thing I’m sure you have, as I want it to exist very much.

Q: How did you and Camille team up?

A: We were motivated by our mutual love for the joyous nature of being able to debate humanity’s future in a public arena against two of the hottest brains in existence [Hanna Rosin and New York Times columnist Maureen Dowd]. Also, they offered a lot of cash, and I wanted to get triple glazing in my kitchen. If there’s a gale outside, the shopping list on my fridge door flaps in the breeze. It’s basically a human rights issue.

Q: What strengths do you and Camille bring to the table?

A: Well, the strength I do not bring is upper body — if we have to settle this thing by doing pullups, I am screwed. I feel my strengths are a) “general roflment” and b) that the new Arctic Monkeys album is great, so ipso facto, men cannot be obsolete yet.

Q: Do you think you’ll win the debate?

A: My motto is “Go hard, or go home.” But given that I already have my return ticket to London booked — and so am absolutely pre-committed to “going home” — that suggests a fundamental flaw in my motto, viz. the “go hard” bit. I guess that motto only really works if you live a genuinely itinerant lifestyle, with the option of never going home and checking into a series of hotels whilst perpetually engaged in “going hard,” instead. To be honest, the whole thing is a mess. I wish more heroic figures in films would have this kind of debate before they say these things. They’re making what should be a very simple matter very confusing and costly.

Q: Have you and Camille planned a victory party?

A: I never travel without my fold-out mini-bar and cigar humidor, and if I can’t get Camille on the pop ’n’ chop, body locking to “Get Lucky” by the end of the evening, I have wholly failed in my endeavour. And let’s face it — not just Camille. I’m not coming all the way to Canada without ending up on a bar crawl with Maureen Dowd and Hanna Rosin, ending up in some bins round the back of a bar at 4 a.m. wailing, “Where’s the hot dude from Due South?”