The lost art of mending

How many articles of clothing do you throw away each year that could be salvaged with a little effort? 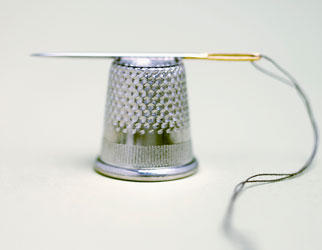 When I was getting Baby Girl ready to go off to university, one of the things on my Must Teach Her list (along with how to clean a toilet) was how to mend her own clothes. I like mending. It’s not because I’m cheap. Really. It’s not. It’s because I can’t stand the idea of throwing out something simply because there’s an open seam, a missing button, or some other small flaw that a needle and thread, new button, and strategically placed patch will easily fix.

Once upon a time our grandparents even mended socks. It was called darning and they did it because it was cheaper than buying new. Now, in our very disposable society, it’s so cheap to buy new that we’ve lost the desire and the skills to fix our stuff.

We hardly ever mend our clothes anymore. It isn’t worth our time and effort. So we turn button-less shirts into cleaning rags and we pile clothes into the Goodwill box rather than thread the needle. (Hey, I can still thread a needle without my glasses!)

If you’ve never sewn on a button or fixed a hem that’s fallen, it’s time to learn. Mending your stuff means less crap sent to the landfills and more use out of what you buy…which means less spending overall and more savings. Go ahead and try. All you have to lose is whatever you couldn’t wear anyway. What you have to gain is an incredibly useful skill.

If you’re using the fact that you don’t have a sewing kit as your excuse, head to the dollar store, buy a pack of needles and a roll of white thread, and get started. Start your own button barrel: each time you do have stuff you’re gonna dump, trim off the buttons first and add them to your barrel. (Yes it can be an old jam jar or coffee tin.)

You can accumulate a solid mending kit over time, adding new colours of thread as you need them. Or ask for your mother-in-laws extras. She’ll be impressed by your thriftiness!