You thought you left the mean girls in the schoolyard. But in the workplace, we are most commonly victimized by other women, crippling our confidence and hurting our health 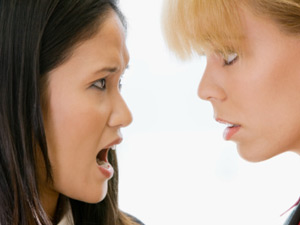 Susan Kennedy was poring over printed linens and hand-blocked wallpaper. The junior interior designer reached for another sample book, but a senior colleague snatched it first. When Kennedy fostered relationships with new clients at the Ottawa company, the co-worker would claim they were her old customers. And the woman, who was “built like a linebacker,” would wait until Kennedy was sitting at her desk before starting a conversation, then literally tower over her.

“As I saw her approaching, my stomach would be full of dread that there was going to be a confrontation,” says Kennedy. “It was always intimidating.”

The job was her first out of design school. And while she was excited about creating window treatments and selecting furniture for upscale homes, Kennedy soon found herself persistently bullied by her colleague. “She focused on me and made my first year a living hell,” Kennedy recalls.

THE FEMALE BULLY
Beware the bully in heels. A U.S. survey found that 40 percent of workplace heavies are women — surprising, given our allegedly maternal natures — and that they tend to pick on their XX-chromosome colleagues. In fact, women are the most common targets of bullies of either gender, according to the Workplace Bullying Institute, based in Bellingham, Washington, which led the 2007 study. And while there aren’t any national statistics about bullying on the job in Canada, the experts say it’s prevalent here, too. Quebec, a leader in addressing the issue, receives around 2,000 complaints a year at its labour commission from non-union employees alone.

What’s more, research has found that the damage caused by bullying can be more severe than that of other, more high-profile cubicle troubles. A Canadian study determined that victims of bullying were more stressed and withdrawn, and less satisfied with their jobs, than those of sexual harassment.

“It’s one of the most important health problems in the workplace today,” confirms Angelo Soares, who teaches organizational behaviour at the Université du Québec à Montréal and has listened to nurses and engineers alike recount traumatic tales. “Bullying can happen anywhere. No one’s safe.”

WHAT’S BULLYING?
Workplace bullying is defined as deliberate and focused mistreatment of an employee. Quebec, the first jurisdiction in North America to specifically protect against this type of psychological harassment, describes it as repeated, vexatious behaviour that erodes a worker’s dignity. Tactics range from the loud — yelling, door slamming and ranting — to the subtle: A bullied employee might find herself excluded from important meetings or assigned tasks without adequate resources to complete them. Her co-workers could be recruited in a campaign to isolate her. And behind her back, the bully may trash her to higher-ups, although bosses themselves are often the culprits.

In his research, Soares has seen victims of a slew of behaviours that even his first-year management students recognize as inappropriate: a supermarket cashier who received letters from a supervisor every few days detailing minor infractions — an unironed uniform, shoes not conforming to code, arriving two minutes late; a secretary whose computer was “losing files,” who eventually learned it wasn’t a virus but a colleague deleting them after hours; and a hospital-pharmacy worker whose boss tried to control her day so much that even her bathroom breaks were monitored.

WHO’S THE TARGET?
The employee under attack is often a competent, committed one, singled out for her strengths, not her weaknesses. And she’s often on her own, says Gary Namie, the research director for the Workplace Bullying Institute. “Even though it’s a form of violence — psychological violence — it’s still seen as the victim’s fault.”

Experts also note that the gender — of the bully or target — doesn’t determine whether this happens or to whom; rather, bullying typically occurs in an organization with poor leadership. “There is an element of bullying that’s simply predator-prey,” says Diane Rodgers, project coordinator for BullyFreeBC, a lobby and education group. “And when people are allowed to behave badly, you do have the Lord of the Flies factor that takes over.”

HOW DOES IT HURT?
High blood pressure, clinical depression, diabetes, even post-traumatic-stress disorder can befall a bullied employee. While working at a public-relations firm on the West Coast, Laura Adams* developed shingles. Her boss’s hallmark behaviour included storming out of meetings, throwing news releases in subordinates’ faces and shouting at her staff: “What’s wrong with you? Why can’t you think?” After only four months, Adams could no longer cope with the bullying — she had to quit.

As with many employees subjected to this mistreatment, Adams’s confidence also suffered a hit. “Before I quit, I had to convince myself that it wasn’t me; it was her,” says Adams. “But even to this day, I still have self-doubt.”

The disruptive behaviour under fluorescent lights also goes beyond the personal: It hurts colleagues, hampers productivity and costs the health-care system. The Canadian Centre for Occupational Health and Safety, a federal agency, reports that bullying cultivates an unhealthy environment, which increases absenteeism and turnover and decreases motivation and morale among employees.

WHAT CAN YOU DO?
Start by keeping a record of what’s happening, then seek out help and support wherever you can, whether it’s through your union, your doctor or a lawyer, says Rodgers. But she warns that you could encounter resistance: “Be aware that all of this can be framed to make you look neurotic, paranoid and unstable.”

In Canada, protection against workplace bullying depends on where you earn your paycheque. Quebec, Saskatchewan and the federal government have specific legislation to protect bullied employees. Ontario just passed a similar law, which will take effect in June. And if the bullying is linked to issues such as gender, race or disability, you can make a case under human-rights law.

But for many working Canadians, the only option — beyond quitting or being fired, the most common outcomes, according to the Workplace Bullying Institute — is a potentially costly and time-consuming battle in court. Initially, there wasn’t even a legal recourse, points out Christine Thomlinson, an employment lawyer in Toronto. But in the past decade, there have been a number of high-profile victories for bullied employees, built around constructive dismissal or personal injury, including a $950,000 settlement in 2006 for a female officer in the Royal Canadian Mounted Police.

Whatever your decision, says Rodgers, take the steps necessary to protect your health, financial security and reputation — and be willing to walk away from your job. “If you try to hang on, if you care too much about the work you do and the career you’ve built, then you may be putting other, more important things at serious risk.”

LIFE LESSONS
For Kennedy, the Ottawa interior designer, there was a happy ending. After a year revamping homes and assisting other designers, she felt confident enough to stand up to her tormentor. And she took a deep breath and reported the bully’s actions to the company’s owner. The bully was reprimanded and, when things didn’t change, she was fired three months later. “

It was a great life lesson for me,” says Kennedy, who went on to redesign official residences in the capital and is now based in Calgary. “As I continued my career and eventually opened my own design firm, I knew to watch the interactions among my staff to ensure that I never had a bully working for me.”