The Lowdown on RRSPs vs. TFSAs

I think of an RRSP as a wine cellar for your retirement savings. A traditional wine cellar is a place to store your pinot noir, to protect it from the heat and allow it to mature into a more flavourful and more valuable wine. An RRSP is a place to store some of your money, to protect that money from income tax, and allow it to mature and become more valuable over time. A wine cellar holds wine, but you can’t drink a wine cellar itself. An RRSP holds investments — such as mutual funds, stocks, or bonds — but it isn’t an investment in itself. You can choose super-safe or riskier investments to put in your RRSP, depending on your risk tolerance and circumstances.

How much room is in the RRSP wine cellar?

Why are RRSPs a good thing?

Two reasons: First, you get to defer income tax on the money you put into it. Say you put $5,000 into your RRSP; it reduces your taxable income by $5,000. If you were in a 30 percent tax bracket, you would have paid about $1,500 in income tax on that money. But instead, because it is safely stored in your RRSP, you get a $1,500 refund cheque. Hooray! And second, the $5,000 can grow inside your RRSP shielded from tax, for years and years. Then, when you’re retired, you’ll withdraw the money to pay your bills. And while you will pay tax on the money then, the tax rate will likely be lower because your income in retirement will be lower.

A TFSA is also a special wine cellar, but it works in a different way. The money you contribute also grows tax-free, hence the name. But it’s not tax deductible, so, unlike an RRSP, your TFSA contribution doesn’t increase your tax refund.

How much room exists in the TSFA wine cellar?

Why are TFSAs a good thing?

Two words. Tax. Free. The money you contribute will grow over time and you won’t have to pay tax on that growth. Like an RRSP you can invest the money how you like, but TFSAs are more flexible and there isn’t an annual deadline like there is with an RRSP. A TFSA is a great savings vehicle for many different purposes: a new car, vacation, the down payment on a house, and in some cases, retirement, though it wasn’t designed specifically for that purpose.

When a TFSA trumps an RRSP:

Bottom Line: Make 2014 the year you get serious about retirement savings. For most of us, the RRSP should be the first choice when it comes to saving for retirement. Stock that RRSP wine cellar and your 80-year-old self will thank you for all eternity.

P.S. This year’s deadline for RRSP contributions is March 3.

Bruce Sellery is a personal-finance expert and author of the bestselling book The Moolala Guide to Rockin’ Your RRSP. He’s a columnist for MoneySense magazine and a regular guest on Cityline and the Lang & O’Leary Exchange. His website is moolala.ca. 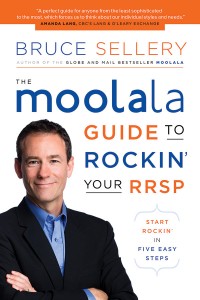