Cost of the average Canadian courtship: $43,842

Think you can't put a price on love? Think again. Here's how one company breaks down a two-year pre-matrimonial courtship. 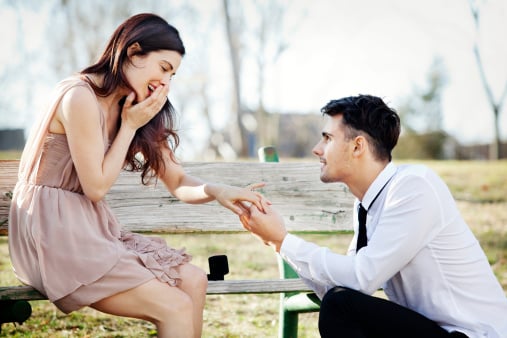 Last week a friend of mine was complaining about the high cost of being a wedding guest. Between the dress, the gift and the car she had to rent to schlep to the idyllic suburban venue, she reckons that wedding cost her $400. But that cost pales in comparison to the money the happy couple had to shell out before they make it to the altar. We’re not just talking about the cost of the wedding – it’s everything from the first date to the honeymoon.

The total cost of the average Canadian courtship is $43,842, according to this fun infographic. Indeed, the folks at Ratesupermarket.com have tallied up the high cost of a two-year pre-matrimony courtship, tracking the cost of the relationship from the moment that eyes lock across a crowded room to the wedding day and honeymoon.

Here’s how they break it down:

Seeing the process of love and marriage turned into a hard, cold cash figure is pretty frightening. After all, most of us probably can’t afford to shell out that kind of money on building a new relationship. And there are countless ways to build a relationship that don’t cost a fortune, and won’t drive you into debt – because sharing a big debt load is the least romantic thing you can do together as a couple, believe me. Cut out a few fancy dinners and skip the $3,500 engagement ring and you’d automatically have a good chunk of cash set aside for a matrimonial nest egg.

How much do you think you’ve spent on your courtship? Looking back now, would you have done anything differently?