Canadian men on average get paid a whopping 20 percent more than their female colleagues – what gives? 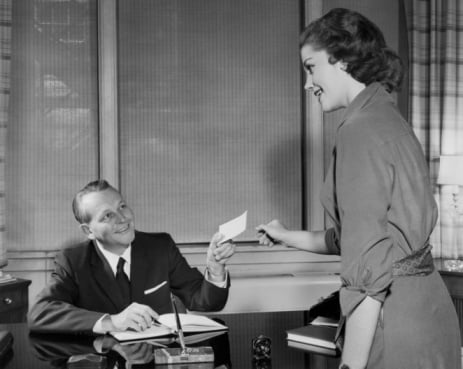 Despite the positive focus on women in the workplace that’s come from high profile executives like Yahoo’s Marissa Mayer and Facebook’s Sheryl Sandberg, the glass ceiling is still hurting women where it counts – right in the wallet.

According to data compiled by Bloomberg, female top executives at Standard & Poor’s 500 Index companies in the U.S. earned 18 percent less than their male counterparts. And while those women were raking in millions more than you or I do at our jobs, they’re still bringing home a lot less bacon than men. (Let’s not even talk about how only 8 percent of the top executives in the survey were women, occupying a tiny fraction of corner offices.)

The huge earnings gap between men and women is something we know well here in Canada – we have one of the biggest in the world according to the Organization for Economic Cooperation and Development (OECD), which in 2010 found that Canadian men on average get paid a whopping 20 percent more than their female colleagues.

The question is why do women continue to work for lower wages, even when they reach the top ranks? What gives?

A few experts quoted by Bloomberg shed light on some possible reasons – it’s not the whole picture, but it certainly points to a few gaps in how women think about themselves at work and their discomfort with how they might be perceived as they climb up the career ladder.

1. Women value the opportunity, not themselves

Dawn Lepore, former CEO at at Drugstore.com and former vice chairman of Charles Schwab Corp. is now a director at AOL Inc. and TJX Cos. (TJX). She said, “When I think about the way I negotiated my package when I went to Drugstore.com, I thought ‘this is a great opportunity and rather than demand a lot upfront, I’m going to do a great job and then I’ll get rewarded.’ I didn’t want to be greedy, or viewed as out for myself. Maybe women are more collaborative.”

Sheryl Sandberg has said that women lack sponsors in the workplace. That stops them from reaching for more challenging work and higher pay.

3. There aren’t enough other women

The rarity of women in top jobs means they might be less likely to get tough on pay, says Pat Cook, president of boutique executive search firm Cook & Co.

4. We start out getting paid less

Because we start out working for lower pay, we often don’t catch up, even when we rise to senior levels, adds Pat Cooke.

5. Some industries are better than others

The gender pay gap often depends on the industry women are working in. For example, according to the Bloomberg data, Kinder Morgan Inc. CFO Kimberly Dang, 43, has been in the job since 2005. Last year she got compensation of $1.72 million while her Houston-based energy company had sales of $10 billion last year. By comparison, the average compensation of CFOs at five similar companies with sales ranging from $5 billion to $17 billion was $2.3 million.

6. We fear the backlash

Women tend to push for opportunities over money because they’re pegged as selfish and unlikable, even though men don’t get that reaction when they demand more, says M.J. Tocci, director of the Heinz Negotiation Academy for Women at Carnegie Mellon University.

Use a stiletto network to get ahead in your career

The most valuable career advice I ever got…