Should you date a colleague?

Is dating a colleague a normal part of modern life or a recipe for disaster – or even a pink slip? 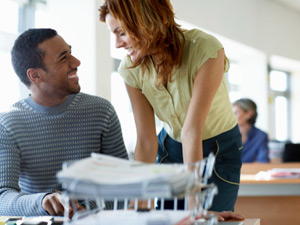 In 1964, the legendary Cosmopolitan editor Helen Gurley Brown published a book called Sex and the Office that encouraged women to liberate their libidos and saddle up a supply of willing male colleagues. She recommended using flattery to get ahead, keeping a bottle of booze in a desk drawer and viewing lunch breaks as a way to tackle hungers that can’t be sated with a simple Cobb salad.

Times have changed, of course, but the office affair is still far from uncommon. According to the 2008 Harlequin Romance Report, 33 percent of men and 32 percent of women surveyed admitted to having slept with a co-worker. Whether you work in a tall tower in Toronto or a boutique in Vancouver, the work environment can provide an assortment of potential mates. “Love is very hard to find, and the workplace is a common source of talent,” says Fiorella Callocchia, president of HR Impact, a human-resources consulting firm in Oakville, Ont. “It beats the heck out of a bar, and usually you’re sober when you meet somebody at work.”

Well, one would certainly hope. That was the case for Penny Staznik, 36, who works in human resources for a large financial services firm in Toronto and met her 33-year-old accountant husband while on the job. “I have vast experience in this field,” she says cheerfully, adding that she’s met a total of four boyfriends at work. Around five years ago she invited a group of co-workers to a holiday party, and her now husband was the only one who trudged through a blizzard to get there. “We ended up ditching the party and going out to dinner; there was a lot of chemistry,” she says.

Staznik and her husband, who no longer work together, saw each other in the office every day – something she acknowledges not everyone can handle. “It can be a problem when it doesn’t work out,” she says. “You have to know that you’re going to bump into these people and you want to be comfortable talking to them.” Staznik’s husband left their workplace for another job about four months after they started dating, but she misses seeing him around the office. “We don’t really see each other during the day unless we book an appointment – he works only a couple of blocks away,” she says. “We keep saying we should make a point of having lunch more often – evenings can be so busy with events and our little one.”

But what about the steamy side of things, like being stretched out over a boardroom table after a day of simmering flirtation? In reality most people are reluctant to compromise their jobs. “I’ve always been afraid of getting caught,” says Staznik. “The offices don’t lock around here.”

While the silent exchange of smouldering looks over cubicle walls might sound exciting, working with your lover isn’t so much fun when things sour at home. If you’ve had a fight with your boyfriend, often you just need some time to yourself. But when you work together, there he is, standing next to the fax machine or heating up his lunch in the microwave.

Even if you’re not sparring, that doesn’t mean that dating a co-worker won’t affect your output. (Scribbling his name all over your file folder isn’t going to finish that report.) Andrew Davies, a 32-year-old graphic designer in Toronto, says that his secret workplace relationship interrupted his productivity. “There was a guy who was always flirting with my girlfriend,” he says. “I found myself doing low-level espionage, and I can remember mornings just sitting there, sipping my coffee, not focused on the computer screen, thinking about her and this guy making out in the elevator.”

When the fling fizzles

Office relationships – and relations at the office – can get particularly ugly when the people involved are married or engaged. Shannon (who asked that her real name not be used), 31, works for a government agency in Toronto. When she started a short, steamy affair with a co-worker who was engaged to another woman, flirting next to the photocopier seemed like a good idea at the time. It’s much less exciting now that it’s over, Shannon’s former paramour has married and she still has to work with him on a daily basis. “It was really awkward in the beginning,” she admits.

The two travel together frequently for work, and their affair – once the heat was gone and reality had set in – put a strain on their professional relationship. His fiancée knew about it and called him constantly while he was on the road to make sure that he was minimizing the time he spent with Shannon. “He would come downstairs and announce to everyone that he couldn’t join us for dinner,” she recalls. Several years later, things are mostly back to normal – except when his wife drops by the office. “I try my best to avoid her,” says Shannon.

While most workplace relationships don’t go as far as the great Clinton-Lewinsky debacle, they can still go really wrong. Callocchia says she has been involved in numerous cases where an executive was asked to resign because a workplace relationship had ruined their personal reputation and was considered to have besmirched the company name. “We have to draw the line, as employers, when it has a negative impact on the reputation of the organization, team or managers,” she explains. “We care about productivity and efficiency. If you employ a couple and they’re both upset, it can wipe out half the team.” She says that some companies have even implemented policies aimed at barring intra-office dating.

Still, for millions of single Canadians, the opportunity to catch the eye of the cute guy in sales can make or break a day. Callocchia recommends watching your step but also understands the temptation. “At the end of the day, can we really control how someone feels about somebody, and do we want to?” she asks. “If you want happy employees, having a satisfying personal relationship goes a long way towards that.”